The Singapore-China market has huge potential for low-cost carriers, which currently only account for 19% of capacity between the two countries. But the market has proven to be challenging for Jetstar, which is cutting two more Singapore-China routes and reducing the LCC group’s capacity share to an insignificant 3% compared to 10% two years ago.

Expansion from Tigerair and Scoot has filled some of the void left by Jetstar. But total LCC capacity and the LCC penetration rate in the Singapore-China market is on the decline, dropping to only 16% in Jan-2014.

Singapore’s overall LCC penetration is now 31% and is continuing to rise. The relatively low penetration in the Singapore-China market is surprising, particularly as the market enjoys open skies. But the long-term potential is there for more LCC services.

Tigerair on 29-Oct-2013 launched services to Lijiang, which became the carrier’s fourth mainland Chinese destination and its first new destination in China since Apr-2006. Tigerair is looking at further expanding its Chinese network as it continues to grow rapidly, with three more A320s to be added over the next five months. But LCC services from Singapore to China are not a slam dunk, as Jetstar has discovered.

Jetstar pursued aggressive expansion in the Singapore-China market in 2010 and 2011, with seven destinations added. Six of these were served by Singapore-based Jetstar Asia while Beijing was launched in late 2011 by the group’s Australia-based long-haul unit.

At the beginning of 2012, the Jetstar brand had about 6,000 weekly one-way seats from Singapore to China, giving it just over 10% of total capacity between the two countries. Tigerair at that time had about 4,000 weekly one-way seats to its three destinations, two of which were also served by Jetstar, giving it a 7% share of Singapore-China market and LCCs an overall penetration rate of 17%.

But Jetstar has since steadily cut back in the Singapore-China market, with most of the cuts being implemented or decided in 2013. With the upcoming suspension of services to Beijing from 1-Dec-2013 and to Guangzhou on 5-Jan-2014, Jetstar will be left with only three destinations in mainland China – Haikou, Hangzhou and Shantou.

Beijing and Guangzhou, which at one point were both served daily, were earlier reduced to the current level of three and four weekly flights respectively. Beijing and Guangzhou join much smaller Ningbo and Guilin in the list of former Jetstar destinations in mainland China.

See related report: Jetstar misses another opportunity in Singapore as it reduces focus on China market

Jetstar Asia’s three remaining mainland Chinese destinations are each served with four weekly frequencies, which will give Jetstar only 2,160 weekly one-way seats in Singapore-China market from Jan-2014. This equates to only a 3% share of capacity, down from more than 10% in Jan-2012. 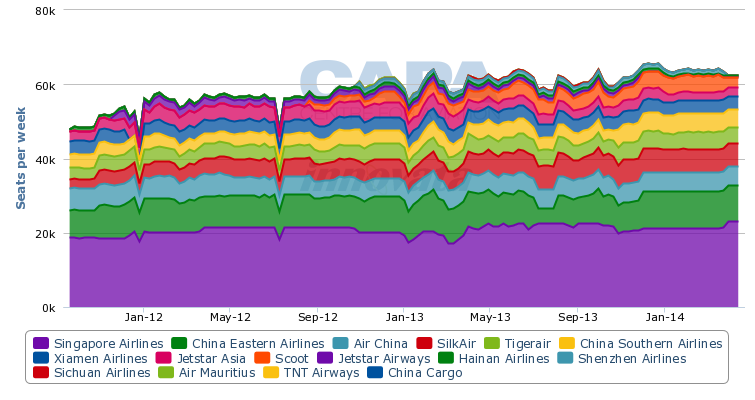 Total capacity between Singapore and China will reach almost 64,000 weekly one-way seats in Jan-2014. This represents about an 11% increase compared to Jan-2013.

Over the past year Tigerair has started to expand in mainland China, expanding on the Singapore-Guangzhou and now launching Lijiang. But the total capacity increase has been relatively modest, with Tigerair offering 4,500 weekly one-way seats to China in Jan-2014, a 25% increase compared to Jan-2013. This only matches the 25% to 26% increase in system-wide capacity (as measured by ASKs) that Tigerair is projecting for the fiscal year ending 31-Mar-2014.

Lijiang is only initially being served with between one and two weekly frequencies (a total of three flights every fortnight). Guangzhou is now served with two daily flights, an increase from 10 weekly flights one year ago. Haikou and Shenzhen are currently each served with five weekly flights. Capacity in these two markets has been stable in recent years although capacity to Haikou typically fluctuates between three and seven weekly flights depending on the season.

Lijiang is a niche leisure destination, a picturesque UNESCO heritage site in the mountains of Yunnan province. Tigerair is the first Southeast Asian carrier to serve Lijiang. Singapore is only the fourth international destination to be served from Lijiang, joining Hong Kong, Seoul and Taipei, according to Innovata data.

South Korea’s Asiana and Taiwan’s Mandarin Airlines, which are the only other foreign carriers serving Lijiang, link Lijiang with Seoul and Taipei. China Eastern, which is the largest carrier in Lijiang with a 25% share of total capacity, serves Taipei and Hong Kong along with five domestic routes. 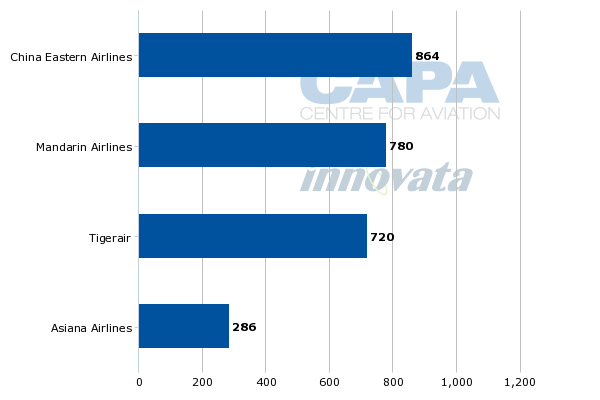 Larger Chinese destinations, namely Guangzhou and Beijing, proved to be more challenging for Jetstar. Chinese carriers are often low fare competitors on international routes. Chinese carriers also have the advantage of being able to use their large slot portfolios to mount additional international flights at their preferred times while LCCs trying to access Chinese airports are typically only offered off-peak slots, including at some secondary cities.

In some Singapore-China markets, such as Guangzhou, the Chinese carriers offload at low prices a large portion of their inventory to Chinese travel agents. Singapore Airlines (SIA) is able to attract the top end of the market, including business and premium traffic. With the Chinese carriers having a strong position on the leisure market little is left for the LCCs on competitive routes such as Singapore-Guangzhou.

Singapore-Guangzhou is currently served by China Southern with four daily A320/A321 flights and by SIA with 10 weekly A330 frequencies. Jetstar could not make the route work with China Southern aggressively taking such a large chunk of the leisure traffic. Tigerair is likely also finding the route challenging but remains committed and strategically would not want to reduce its China operation.

Un-served secondary destinations can be easier for Singapore-based LCCs as they do not have to compete with powerful Chinese carriers and are therefore able to more easily penetrate the inbound market by working with local agents. Scoot has focused on developing new markets and three of its four Chinese destinations are not currently served by other carriers.

Scoot recently reduced Tianjin to three weekly frequencies but is planning to increase the other two routes to four weekly flights by the end of 2013. However, the frequency increases on the Singapore-Nanjing and Singapore-Qingdao-Shenyang routes will be offset as Scoot starts to use 323-seat 777s on most flights in those markets compared to the 402-seat 777 now used.

While Scoot’s load factors have been respectable, the 777 is too large of an aircraft for secondary Chinese destinations. Scoot sees the 787-8 as a better fit and is expected to accelerate expansion in mainland China after it starts taking delivery of the type in 2015. Scoot currently has 10 787-8s and 10 787-9s on order with the larger 787-9 slated to be delivered from late 2014. As CAPA reported on 17-Oct-2013:

The 787-8s will have about 20% fewer seats than the 777-200, allowing Scoot to improve profitability in its smaller markets such as Nanjing and Qingdao/Shenyang and launch new routes to secondary destinations which would not be viable with its 777 fleet.

Scoot is particularly bullish on further growing its Chinese network after it takes delivery of the 787-8 as the type is the ideal aircraft for opening routes to secondary Chinese destinations given its smaller seat capacity and efficiencies. Scoot is currently evaluating more potential destinations in northeast China as well as possible destinations in central China such as Xian.

Western China is also an area of interest but not for the short to medium term as destinations in the remote western parts of China need to develop further before widebody flights to Singapore would be viable. Southern China is not on Scoot’s radar as this is within the range of A320s operated by sister carrier Tigerair.

Scoot is an important vehicle for the SIA Group to grow its presence in mainland China, with a focus on opening new destinations which are not viable with the premium SIA brand and are out of range for full-service regional subsidiary SilkAir or short-haul low-cost affiliate Tigerair. The SIA Group will account for 56% of capacity in the Singapore-China market in Jan-2014, according to CAPA and Innovata data. All four of the group’s brands have added capacity in China over the past year.

With more than 40 cities in China now having populations exceeding 3 million, there are plenty of opportunities for new routes from Singapore. China has emerged as the second largest and fastest growing source market for Singapore’s tourism sector.

Singapore recorded just over 2 million visitors from mainland China in 2012, an increase of 29% compared to 2011. In 1Q2013 visitor numbers from mainland China increased by 20% to 648,000, according Singapore Tourism Board data. More rapid growth in Chinese visitor numbers is expected, driving further demand in the Singapore-China aviation market.

About half of China is within the radius of narrowbody LCCs while the rest of the country is within six hours of Singapore, making them ideal routes for the medium/long-haul low-cost model. LCCs face some challenges in gaining traction in China, particularly with the inbound market, but over time these should be overcome. 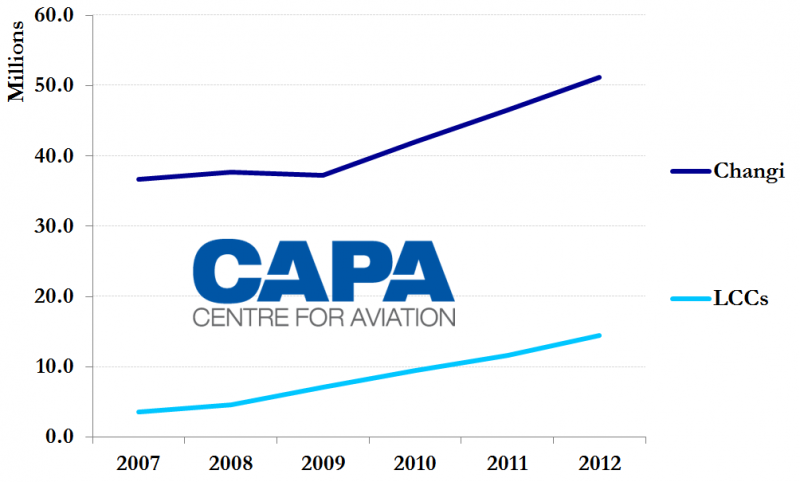 LCCs have accounted for about 75% of the traffic increase recorded by Changi since 2007. This trend is expected to continue as Singapore-based LCCs continue to pursue rapid expansion. More attention will be need to be placed on the China market as the Singapore-Southeast Asia short-haul market becomes more mature.

There is room for considerable LCC growth in the Singapore-China market beyond the current LCC penetration rate, which will drop to 17% as Jetstar implements its latest cuts. Given that a large portion of China is within narrowbody range from Singapore and those portions of the country that are not are starting to be targeted by Scoot, the LCC penetration rate should at least surpass the current 31% average for Changi. The cuts at Jetstar are a setback but over time the market will almost certainly grow.