Tiger Airways to establish a third country base? Virgin Blue to introduce a new 'economy section'

Tiger Airways CEO and President, Tony Davis, stated the group will “continue to look at opportunities to set up new Tiger ‘Cubs’, to grow its existing business in the growing Asia Pacific region. The carrier added that Tiger Airways Australia’s operations have been profitable for the past six months, and the carrier is now well positioned for growth.

Virgin Blue to introduce a new 'economy section for businesspeople'

Virgin Blue announced plans to introduce a new ‘economy section for business people’, with the product aimed at business travellers who “don't want to put their hands in the pockets", according to CEO, Brett Godfrey, speaking to The Australian. He commented, “we don't seem to get a lot of value for that [current wider pitch seating], so we've seen the ability to lower our costs further by putting in more seats”.

SpiceJet’s shares slipped 1.3% on Friday, as the carrier announced the sale of 1.6 million shares (0.66% stake) in the carrier by Merrill Lynch Capital Markets Espana for INR57.02 per share, totalling INR91.2 million in an open market transaction on 26-Feb-2010. 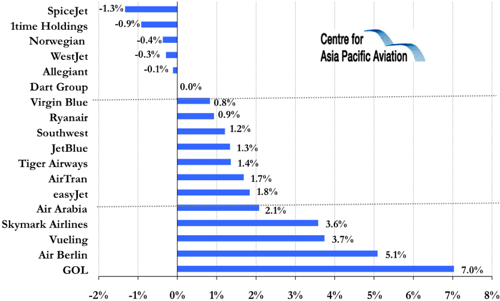