Meanwhile, MAp (formerly Macquarie Airports), which controls stakes in Sydney Airport (as well as Copenhagen and Brussels), is close to overtaking Qantas for the first time in terms of market capitalisation, following a surge in its share price over the past month, and weakness at Qantas. As of Friday, MAp had a market cap of AUD6.216 billion, just shy of Qantas’ AUD6.271 billion. See related report: MAp Group back in growth mode. Q&A with CEO, Kerrie Mather

Elsewhere, Asiana Airlines’ shares surged 7.5% on Friday, as it announced record passenger and cargo traffic during the first two months of this year, citing increasing international passenger demand and a recovering economy. The airline handled 876,000 passengers in Jan-2010, while Feb-2010’s tally of 833,000 was the third highest monthly total, according to a Yonhap report. 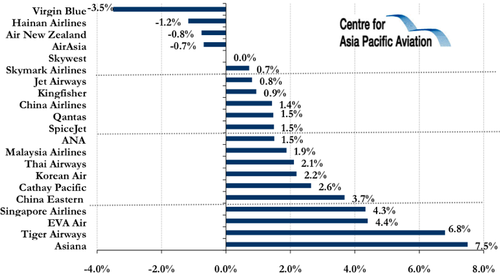