Tiger Airways Australia aims for a fresh start in August. No spike in domestic fares – yet

Tiger Airways Australia will be grounded until at least the end of this month, following the Civil Aviation Safety Authority's (CASA) application with the Federal Court seeking an order that the airline not fly until 01-Aug-2011. Tiger did not appeal the application. The Federal Court has listed Friday 22-Jul-2011 for a directions hearing.

The extension of the grounding raises questions about Tiger's ability to successfully resume services in Australia. The carrier's brand and reputation have suffered significant damage over the past week.

Financially, the grounding in Australia is costing Tiger SGD2 million per week. But the group’s Singapore-based operation, which is larger than the Australian unit and has been highly profitable in recent years, remains unaffected.

Mr Chin has taken a leave of absence from SIA Group for an undetermined amount of time to assume the new role at Tiger. Mr Chin was previously divisional VP for cabin crew operations, a post he assumed after leaving the chief executive post at SIA Group regional subsidiary SilkAir in Oct-2010.

SIA owns 32.9% of Tiger Airways, while Dahlia Investments (owned by Temasek) owns 7.4%. Clearly it would in SIA's financial interest to use SIA Group's expertise to assist Tiger, while maintaining the separation of brand and management. But for legal reasons SIA is unable to help Tiger with the situation it faces in Australia.

The two carriers are treated by authorities as separate entities because they have separate stock listings and compete head to head on some routes. Mr Chin also canot be in communication with SIA while he works for Tiger. The SIA-Tiger relationship remains in effect only at the board level – SIA has three representative on Tiger’s board, two whom are current SIA divisional vice presidents.

Mr Davis concedes that Tiger's image had "taken a knock" in the past week and it would have to work hard to regain consumer confidence. But he said the airline is focusing on a "fresh start" and has reiterated his view that the LCC has a long-term future in Australia. "We're committed to a long-term future and I think Australians want us to be here to ensure that there is competition in the air sector," Mr Davis said.

Australian domestic passenger volumes have risen substantially since Qantas subsidiary Jetstar's entry into the Australian market in 2003. But the more recent entry of Tiger Australia in late 2007 has had a greater impact still. Since Tiger's entry, the domestic market has expanded by some 8 million additional passengers p/a to close to 55 million annually, a substantial increase in what is considered a mature market. 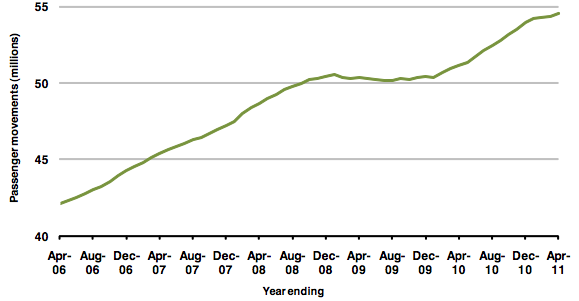 The market has been stimulated by low fares, which have fallen by roughly 40% over the same period. While Tiger has been a relatively small player, its influence on fare levels has been wholly disproportionate in driving fares down across the board. 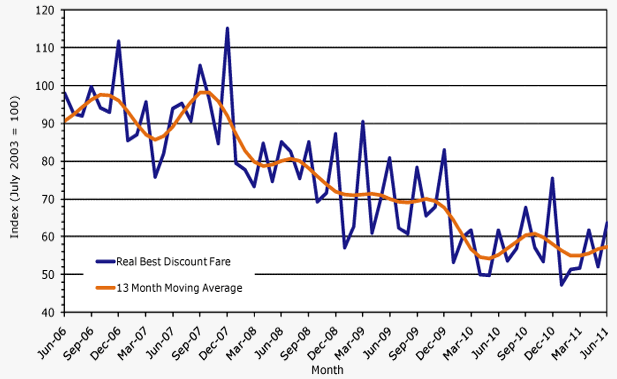 No increase in fares from Tiger's grounding - yet

According to the ITA Software published fares database available on the CAPA website*, the grounding of Tiger's domestic Australian services is yet to show up in the form of lower fares over the next six weeks. Tiger only recently stopped selling fares (for the first few days of the grounding it continued to sell tickets from 10-Jul-2011 onwards).

It is currently the winter low season in Australia and the outlook for discount economy fares on the key Sydney-Melbourne Tullamarine trunk route is attractive for passengers, not airlines. The moving average of the cheapest published fare is at its lowest level since Oct-2010 at approximately USD160 (AUD150) per sector for travel next month.

Fares are slightly higher between Sydney and Brisbane (which was Tiger's second biggest market by seats after Sydney-Melbourne Tullamarine), but there is no evidence of a spike in fares as a result of Tiger's grounding.

It is likely however that domestic fares could rise if Tiger, which represented approximately 5% of total domestic Australian capacity, is grounded beyond 01-Aug-2011, particularly as Australia moves into warmer weather and the end-September/early October school holiday peak period.

* Fares data for some 1500 routes is available in the premium area of the CAPA website. Click here for details about CAPA Membership