Passenger numbers on the Melbourne-Sydney route (Australia’s busiest and now the world’s fourth busiest) surged 18.5% year-on-year in May-2010, reflecting a recovery in business travel and Tiger Airways’ expansion on the route since Jul-2009. The increase was well ahead of the 5.3% increase in Australian domestic airline passengers for the month and signals the revitalisation of the route after several years of stagnation under the former Qantas-Virgin Blue duopoly.

The Sydney-Melbourne and Sydney-Brisbane routes have catapulted up the rankings of the world’s busiest, from 8th and 17th at the start of 2009 to 4th and 12th currently. Only the Tokyo Haneda-Sapporo Chitose and Fukuoka-Tokyo Haneda routes in Japan and the Jeju-Seoul Gimpo sector in South Korea are busier.

The Australian domestic market started contracting around Sep-2008, but aggressive capacity moves by airlines this year to defend market shares have seen the market grow every month since Jan-2010. Traffic growth lagged the 8.2% increase in capacity last month, resulting in a reduction in average domestic load factor from 76.9% to 73.9%. Fares are also under considerable pressure. See related report: Australian premium and discount fares slide further as competition thrives

The other major Australian domestic routes include Brisbane-Melbourne and Gold Coast-Sydney – the latter growing 16.2% year-on-year. Passenger numbers are also surging on the Adelaide-Brisbane (+17%), Port Macquarie-Sydney (+16.1%) and Adelaide-Sydney (+13.5%) sectors.

(a) Inclusion based on expected minimum average of 8,000 passengers per month based on historical trends, and two or more airlines operating in competition over the route.
(b) Total revenue passengers travelling over Australian flight stages on Australian-registered airlines, including passengers carried between domestic airports on international flights.
(c) Covers airlines performing scheduled regular public transport (RPT) operations within Australia, including all regional airlines and Australian international airlines flying over domestic flight stages.
Source: Centre for Asia Pacific Aviation & BITRE 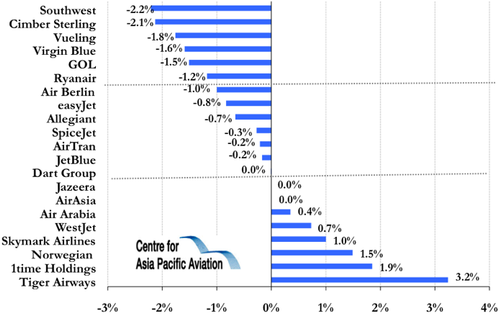