Thomas Cook's 23-Sep-2019 entry into liquidation reduces to three (all based in the UK) the number of competitors operating scheduled airline services between the UK and the Caribbean.

A duopoly between British Airways and Virgin Atlantic until the airline subsidiaries of Europe's two biggest tour operator groups entered the scheduled market (Thomas Cook Airlines in 2013 and TUI Airways in 2014), UK-Caribbean then settled into a stable four way oligopoly.

Thomas Cook and TUI's entry stimulated growth for a couple of years, but overall seat numbers have grown at a compound average rate of only 1.7% pa since 2015. Among the 24 routes operating in the winter high season week of 10-Feb-2020, there is competition only on the six biggest routes. Even on these competitive routes, there have been few significant capacity or frequency changes in recent years.

The Caribbean is the UK's biggest market by seats in Latin America, but its stable capacity compares with much faster growth to other markets in the region.

Thomas Cook was the smallest operator by capacity, with only around one eighth of annual seats. Its exit provides an opportunity for others to enter, but may just prompt the incumbents to close ranks around the space it leaves.

According to CAPA analysis of data from OAG, British Airways is the biggest scheduled operator by annual seats between the UK and Caribbean in 2019.

Its seat share this year is 33.5%, ahead of Virgin Atlantic and TUI Airways, which both have an almost identical share (27.0% for Virgin and 26.9% for TUI). Thomas Cook Airlines has been the smallest - but still significant competitively - operator by seat share, with a 12.6% seat share in 2019 prior to its liquidation.

This fairly settled four-way market was a duopoly between BA and Virgin until the entry in 2014 of TUI, then operating as Thomson Airways, and Thomas Cook entered in 2013.

This was part of a strategic shift by the airline subsidiaries of the leading tour operators to embrace scheduled services, rather than purely offering charter capacity. 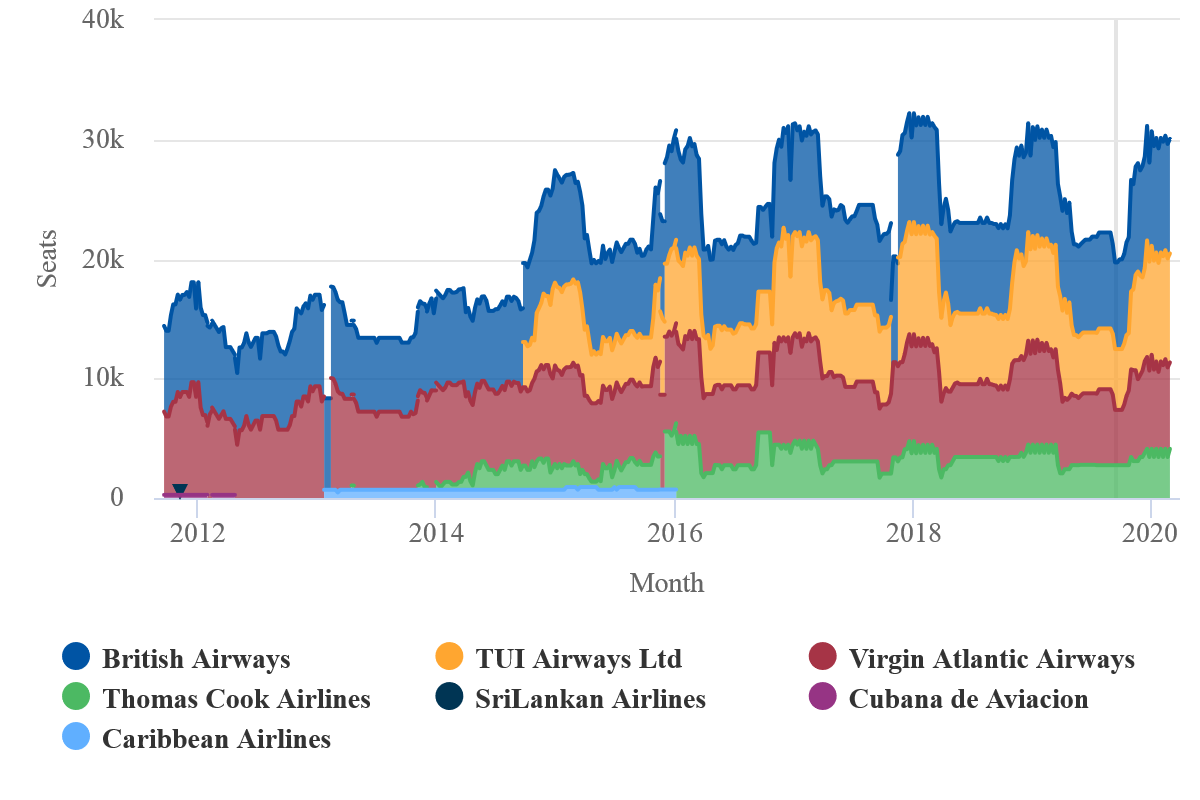 There has been no real dynamism in this market since 2015, the first full calendar year in which both TUI Airways and Thomas Cook Airlines were active participants.

The entry of the two leisure airline subsidiaries of Europe's leading tour operator groups stimulated a 66.1% increase in annual capacity between 2012 and 2015.

Almost four fifths of the incremental capacity over that three-year period was introduced by TUI and Thomas Cook, but their entry also stimulated growth by the incumbents. Between 2012 and 2015 BA's capacity increased by 12.8% and Virgin Atlantic's by 6.0%.

UK-Caribbean has a winter high season

The UK-Caribbean market appeals to UK leisure travellers seeking winter sun. As a result, the schedule has peaks in the December-February period, while May-September is the low season.

Capacity to/from/within Europe as a whole tends to be skewed towards the summer schedule. For the combined winter 2018/2019 and summer 2019 seasons, the winter is only 37% of all European seats. This is less than the winter season's 41% share of weeks and demonstrates lower weekly seat capacity than in the summer.

However, for UK-Caribbean the winter is almost half (49%) of annual seats, which indicates higher weekly capacity than in the longer summer season. 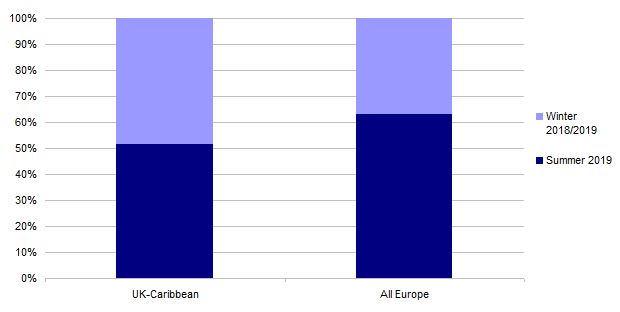 Among the schedules of the four operators, BA's is the least seasonally skewed (44% of its UK-Caribbean seats are in the winter).

TUI's is the most skewed towards the winter (52% of its annual seats), while Virgin and Thomas Cook each have a 50:50 split between summer and winter.

OAG data for the week of 9-Sep-2019, the lowest capacity week of the year, show that there are 18 UK-Caribbean routes this summer, although Thomas Cook's demise would seem to remove six of them. Three of these are summer-only (Birmingham-Punta Cana, Gatwick-Cayo Coco and Gatwick-Aruba), while one (Gatwick-Holguín) is to be withdrawn by the sole operator Thomas Cook Airlines in Oct-2019.

There will be 24 routes operated in the high season week of 10-Feb-2020 (see table below), following the resumption of ten winter-only routes.

Note that four of these winter-only routes are operated by TUI Airways for only a week at a time, typically with one frequency, during a handful of weeks over the winter. There are also eight other such routes not operating in the week of 10-Feb-2020 (but those are flown during other winter weeks).

These routes, which TUI rotates through the winter for a week at a time, are to Bridgetown from Newcastle, Glasgow, Stansted, Bournemouth, E. Midlands, Doncaster Sheffield, Bristol, Cardiff and Belfast International; and to Montego Bay from Cardiff, Newcastle and Glasgow.

Manchester Airport has the most routes; Gatwick has five of the six biggest routes

During the week of 10-Feb-2020 Manchester will have nine of the 24 routes, more than any other airport. Gatwick will have seven, matched by Bridgetown on the Caribbean side of the market. Heathrow, the UK's biggest airport, has only two routes to the Caribbean (Nassau and Bridgetown).

Five of the six biggest routes by weekly seat capacity will be from Gatwick.

Competition only on the six biggest Caribbean routes

The six biggest routes in the week of 10-Feb-2020 are all competitive, but there has been little change to each operator's schedule on these routes in recent years.

Gatwick-Bridgetown, the biggest route by seats, is operated by BA, Virgin, TUI and was due to be operated by Thomas Cook. BA and Virgin operate year-round, whereas the two tour operator airlines have operated only in the winter (TUI since 2014/2015 and Thomas Cook since 2015/2016).

The next two biggest routes are operated by three of the four: Gatwick-Saint Lucia by BA, Virgin and TUI; Manchester-Bridgetown by BA and Virgin (Thomas Cook had also been scheduled on this route).

The remaining 18 routes listed by OAG for the week of 10-Feb-2020 each have only one operator. TUI has eight monopolies, while Virgin and BA have two each. Thomas Cook's six monopoly routes will presumably disappear, at least in the short term.

However, one of Virgin's monopoly routes is Heathrow-Bridgetown, which faces city pair competition from Gatwick-Bridgetown, operated by all four airlines in the UK-Caribbean market.

In total, TUI has 13 routes, Virgin has seven and BA has six routes in the week of 20-Feb-2020. Thomas Cook would have had eight routes. In this high season week, TUI's greater seasonal bias gives it 30.1% of UK-Caribbean seats, almost the same as BA's 31.6%, while Virgin has 24.7% (all seat shares are based on including the 13.6% share planned for Thomas Cook prior to its liquidation - without it, the share of the other three will increase proportionately, assuming no other operator takes on its routes).

Only minor schedule changes are planned for UK-Caribbean

There are no current plans for major changes to UK-Caribbean schedules, although some minor changes are planned.

On Gatwick-Saint Lucia, BA plans to increase frequency from seven to nine times weekly in Jun-2020, while Virgin plans to suspend its three times weekly service next summer.

Virgin's Gatwick-St Lucia-Grenada service will be rerouted as Gatwick-Antigua-Grenada in summer 2020. At the same time, Virgin will reduce its Gatwick-Antigua service from three times to once weekly, but overall service to Antigua will increase to four times weekly with the rerouting.

Following Thomas Cook's exit, Virgin has raised its weekly frequency on Manchester-Bridgetown from two to three and on Gatwick-Bridgetown from seven to nine for winter 2019/2020.

As Thomas Cook leaves, UK-Caribbean could be ripe for new entrants

The stable market structure undergoes the occasional tweak, but there had been no fundamental change since the entry of TUI and Thomas Cook into scheduled UK-Caribbean services. This historically leisure focused market was built on historic ties between the UK and the Caribbean and also features a significant VFR segment.

The lack of growth or any significant change in competitive dynamics suggests that the UK-Caribbean aviation market could be ripe for disruption by one or more new entrants.

Equally, the structure of this market has limited its competitive dynamics over the years and the remaining three operator may work to maintain the new status quo, as suggested by the early signs.