Third quarter to break records for US airlines

The nine largest US airlines are expected to post profits of USD2.4 billion on USD33.3 billion in revenues as they roll out their third quarter results next week. Indeed, they are expected to have an average net profit margin of a healthy 7.2%, according to AirlineFinancials.com founder Robert Herbst who has released his findings.

“That’s the highest margin in 15 years,” said Herbst. “Third quarter profits will hit an all-time record and revenues for the third quarter will be the second highest for any third quarter." He included Delta, American, United, Continental, US Airways, Southwest, JetBlue, Alaska and AirTran in his analysis. United and Continental closed their merger at the end of the third quarter and were reported separately.

“This will be the first third quarter since 2007 that all nine will report profits,” said Herbst. “It is also the first time since 2007 all nine will have two consecutive profitable quarters. Record high profits will be reported by Delta, Continental, US Airways, Southwest, JetBlue and Alaska. Meanwhile, Southwest, JetBlue, Alaska and AirTran will report record high third quarter revenues.”

As an indication of just how miserable the past decade has been for the airline industry, Herbst pointed out that 2007 was the only other year that had a third quarter profit. “While the second and third quarters are historically the best for the airline industry,” said Herbst, “the nine airlines accumulated over USD2.4 billion in losses for 2001, 2002, 2005 and 2008.”

Even so, the third quarter results reflect a remarkable turnaround for the beleaguered industry. Alaska -- who started the race for return on invested capital -- is expected to lead the industry with a 10.8% margin, bang on where it wants to be. Even so, it, as with other airlines, wants to sustain a 10-12% margin level over the business cycle, not just for a given quarter.

Alaska was followed by United at 10.2%, while Continental and Delta come in at 8.4%, in Herbst’ projections. US Airways was 7.2% but American and AirTran trailed the pack at 2.4% and 3.5%, respectively. American is struggling with higher costs because it opted not to enter bankruptcy as did legacy peers. Now that it has launched its joint business with British Airways and Iberia it is expecting a USD500 million positive impact from the pact.

Delta, the world’s largest airline until Continental and United merged, will post an estimated USD8.7 million in revenues for the quarter, while the combined Continental/United is expected to best Delta at USD9.4 million. 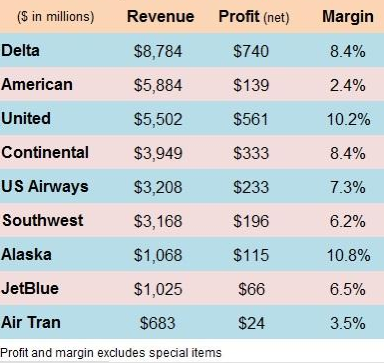