The North Atlantic: the state of the market five years on from EU-US Open Skies

The EU-US Open Skies agreement came into force on 30-Mar-2008. The year before, in 2007, IATA had released a major report looking at the benefits of airline liberalisation. After internal deregulation within the US and the EU, and some limited moves in other parts of the world, the agreement was (and still is) the most significant step towards global aviation liberalisation. The North Atlantic is the world’s largest intercontinental air traffic market and the eyes of the world were on it as it took this step.

The EU-US Open Skies agreement opened up markets on both sides so that any carrier from either side could fly between any point in the EU and any point in the US. It also provided for a second stage of negotiations aimed at loosening foreign ownership controls. This was signed in 2010, but has not so far been implemented.

With the fifth anniversary of Open Skies approaching, this analysis takes the opportunity to review the state of the North Atlantic market since 2008. The launch of Open Skies into the jaws of a global recession blurs its impact, but the main detectable results of Open Skies seem to be in the increased concentration of capacity in the hands of mega carriers and alliance joint ventures, with consequent benefits for load factors and yields.

IATA’s 2007 study pointed to a number of benefits that liberalisation could provide for consumers and for producers. For consumers, these included lower prices, increased output and choice and improved service quality; while benefits to producers included better capacity utilisation and productivity, the transfer of best practice, increased investment, higher profitability and increased market value. IATA cautioned that liberalisation is not a seamless process, that full liberalisation of both operational restrictions (market access, frequencies, fares) and ownership restrictions is required to maximise the potential benefits and that a multilateral approach is likely to have more substantial results.

Traffic between Europe and North America, as measured by RPKs, grew at an average rate of 2.6% p.a. between 2003 and 2011, compared with a world average rate of 5.8% (source: Boeing). In the global crisis year of 2009, traffic on the North Atlantic suffered a 6.2% decline, much heavier than the 2% fall seen globally. In 2010 and 2011, growth recovered to around 3%, but in 2012 traffic was more or less flat year on year, with growth by European carriers more or less cancelled out by cuts by US carriers. 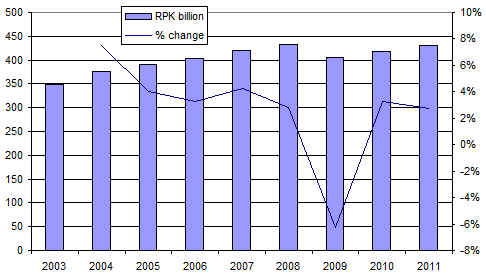 A look at traffic growth rates by European airlines (AEA members) and US carriers on the North Atlantic, together with the overall growth rates implied by Boeing traffic data for the route region, shows that US carriers outpaced their European competitors throughout the mid 2000s, but the reverse has been true since 2009. Overall growth on the North Atlantic has generally under-performed against total world air traffic, with the exception of 2008, the year that EU-US Open Skies came into operation, when it matched world traffic growth. This is a modest piece of evidence that, perhaps, Open Skies had a positive impact on traffic in 2008, but the effect since then is difficult to demonstrate. 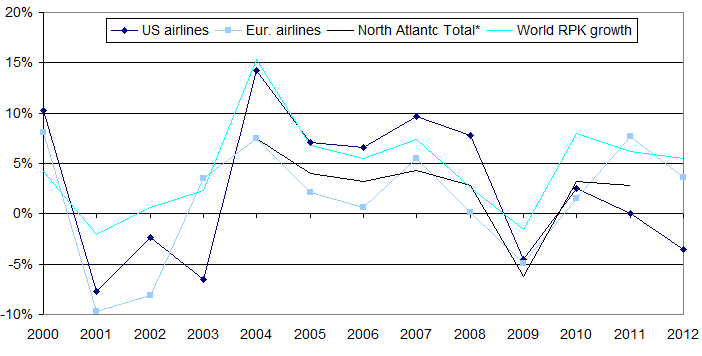 Load factor data from AEA show an improving trend since the early 1990s, when they were around 70%, to reach almost 85% in 2012. The 10ppt gain from 1991 to 2002 has been followed by a 5ppt gain to 2012 and this slower pace of gain is understandable as load factors approach their maximum operational limits. Load factor actually dipped in 2008, but since then it has gained 3.5ppt in four years, a gain that took eight years to achieve before 2008. This perhaps lends support to the claim that liberalisation can improve capacity utilisation, although there has been a worldwide trend of improving load factors. 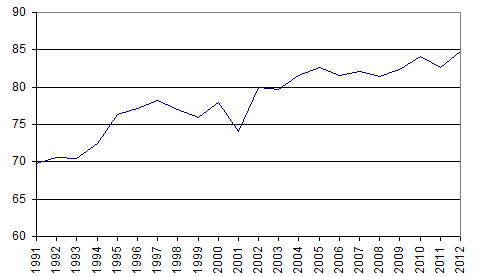 Yields volatile, but have recovered well

Data on US carriers’ North Atlantic yields shows that they have been highly volatile and have fallen in three years since 2001, including a massive 18% fall in 2009, the first full year after EU-US Open Skies and the year in which North Atlantic traffic fell by 6%. Of course, the impact of the global recession far outweighed any impact from EUR-US Open Skies. The strong recovery in North Atlantic yields since 2009, to resume the previous growth trend, reflects a tightening of capacity growth which does owe something to the greater levels of co-ordination allowed by immunised JV operations. Since Open Skies, in effect, allowed these JVs to be given antitrust immunity, then it could be argued that it has had a positive impact on the yield recovery.

Both European and US carriers have seen traffic growth averaging around 3% over the past 10 years. Looking ahead to long term forecasts, Airbus and Boeing expect average growth of closer to 4% until 2031. This is slower than forecast average growth in world traffic of around 5%, but represents a materially higher rate than in the past. Perhaps these forecasts assume that the full impact of Open Skies is still to be felt on traffic growth, but the evidence so far is that Open Skies has had more of an effect on improving load factor and yield than on traffic growth. 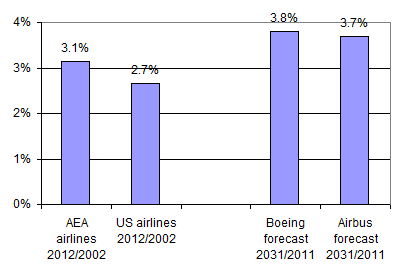 The North Atlantic is the world’s third largest traffic flow region and the largest intercontinental flow, perhaps not surprising given that internal North America and internal Europe are number one and number two overall regions respectively. Due to the slower traffic growth forecast for the North Atlantic than for the world overall, this share is forecast to fall to 6.5% in 2031 (source: Boeing). Nevertheless, it is still expected to remain the world’s largest intercontinental flow.

Share of world traffic by traffic flow region (% of RPKs) 2011 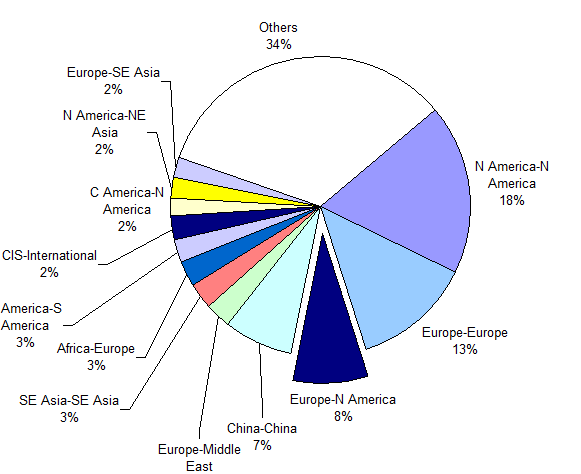 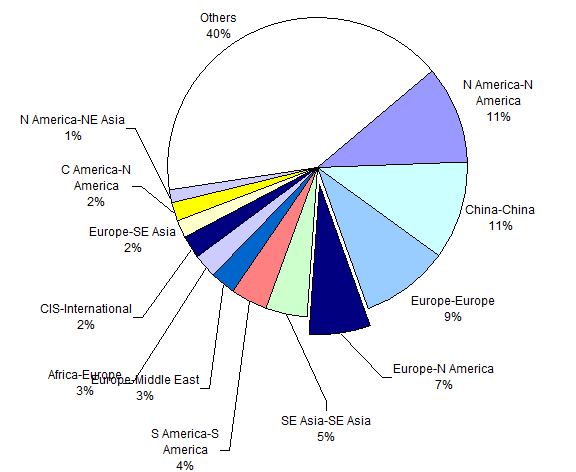 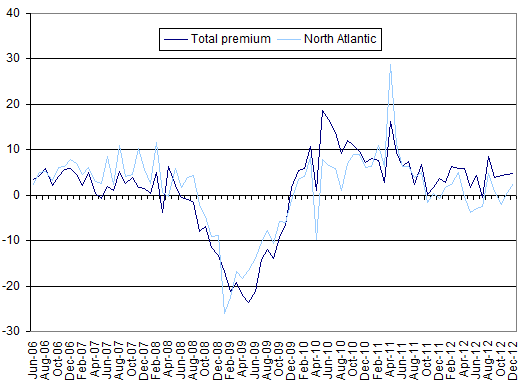 The North Atlantic’s share of global premium traffic grew in the mid 2000s as it outpaced global growth and its share continued to grow in the recession as other regions saw premium traffic fall even more rapidly (most notably within Europe).

However, the story is quite different when we look at its share of premium revenues, which have fallen from around one third of global premium revenues before the financial crisis in 2007 to 26% in 2012 (and the trend line is still moving downwards). Its share of premium revenues is still the largest of any traffic region, but this downward path will be a concern to the leading trans-Atlantic carriers. This trend reflects the austerity faced in particular by the banking sector, previously very high users of trans-Atlantic premium air services. 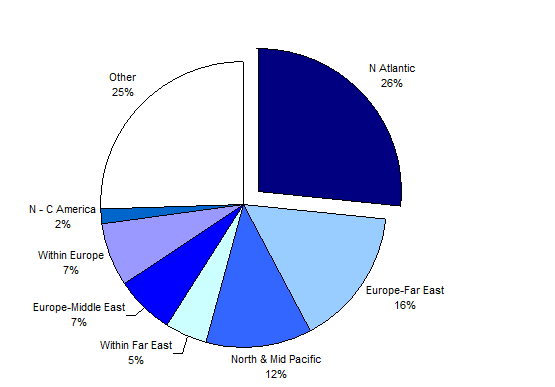 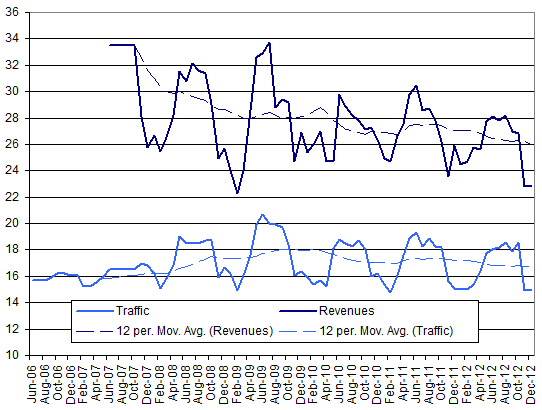 One of the consequences of EU-US Open Skies was to allow the granting of antitrust immunity to joint ventures among market participants that were previously competitors. SkyTeam’s Air France-KLM/Delta/Alitalia JV, Star’s Atlantic Plus-Plus JV and oneworld’s BA/Iberia/AA/Finnair JV are all immunised and the alliances control 83% of capacity across the North Atlantic. If Virgin Atlantic joins SkyTeam, this will rise to 88%.

While EUR-US Open Skies did not allow non-US control of US airlines or non-EU control of EU airlines, it did perhaps ease the path for mergers within each bloc. At least it now meant that an EU carrier could be acquired by another EU carrier without fear of losing its US traffic rights, which are the most important intercontinental routes for most EU airlines. The merger of Austrian into the Lufthansa Group and the formation of IAG from BA and Iberia took place after EU-US Open Skies. The creation of larger European airline groups may have provided some additional stimulus for US carriers to merge (although they already had plenty).

United/Continental and the more recently announced AA/US Air deal have followed Open Skies, which also created the environment in which the Virgin Atlantic/Delta transaction was agreed (although not a full merger). The three European and two US mega carrier groups control 59% of the North Atlantic seat capacity.

*assumes US Airways moves from Star to Oneworld and that Virgin Atlantic joins Skyteam
Source: CAPA – Centre for Aviation & Innovata