As American and US Airways move to close their merger in Jul-2013 and set out on a complex integration process, speculation over the status of the nine hubs comprising the backbone of the combined network was revived after a report from a US government watchdog questioned Philadelphia’s role in the combined network. Similar queries have also arisen over the status of Phoenix once integration is complete.

The network optimisation that occurs during a merger integration inevitably results in some service cuts and eliminations as unprofitable flights are culled. Southwest has been weeding out AirTran’s unviable routes for the last year (notably, without a huge amount of criticism) as it attempts to complete integration of the two carriers.

While it is natural to assume some hubs might lose prominence in the combined American-US Airways network, the reality is that during the last few years all the major American carriers have undergone network overhauls that resulted in concentrating flying at their hub strongholds, leveraging strength where they have a commanding presence. US Airways and American have notably embraced that strategy, evidenced by US Airways placing 99% of its flying at its Charlotte, Philadelphia, Phoenix and Washington National hubs while American continually touts its cornerstone strategy that entails building its network around Dallas/Fort Worth, Chicago, Los Angeles, Miami and New York.

Arguably, in some ways American and US Airways have already done a lot of pruning in their separate networks prior to the merger announcement. American pulled down Boston and essentially wiped out its long-standing hub in Puerto Rico. US Airways significantly cut down its footprint in Las Vegas and shuttered its Pittsburgh hub, 489km from Philadelphia.

Armed with hubs that have distinctive traffic demographics, American and US Airways are operating with reasonable positions of strength from those markets.

Based on data from the US Department of Transportation (DoT) for 1Q2013, American and US Airways combined have a significant presence at four of the top 10 airports based on enplanements – Dallas (where American has an 82% seat share) Chicago O’Hare (where American’s 35% share is second behind United’s 45%), Charlotte (where US Airways represents 94% of the seats) and Phoenix (where US Airways holds a 69% share).

Once the integration is complete, American and US Airways will have ample representation in the top US metro areas of New York, Los Angeles, Chicago, Philadelphia, Washington DC and Miami.

Since the merger announcement scepticism has been cast on Philadelphia’s stature as an international hub, given its 189km proximity to New York JFK. But the reality is JFK is slot controlled, so carriers are limited in the markets they serve from the airport. Obviously American and its oneworld partner British Airways have a foothold on the most lucrative international market – New York to London Heathrow – with a combined 69% share of the seats on offer.

While New York JFK overall will remain a competitive market, it is also fragmented as no carrier has a dominant role. Delta’s leading system share is only about 26%, while JetBlue is the leading carrier at the airport on a domestic basis with a 37% seat share. 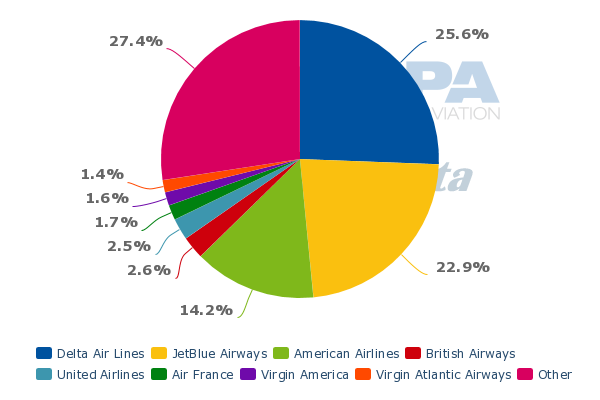 Even as the proximity of New York to Philadelphia logically begs the question of why two hubs that close in geography are necessary, the reality is New York and Philadelphia are large and distinct metro areas, each with their own large originating passenger base.

US Airways also mainly serves secondary European destinations from Philadelphia, which could actually be a positive contribution to the overall network given the recent performance of US Airways’ international markets, which are largely trans-Atlantic destinations.

It only faces competition from Lufthansa on the Frankfurt route, and holds a 72% seat share in the market. Delta also operates service from Philadelphia to Paris, but US Airways also has a commanding seat share lead in that market of 58%. US Airways in May-2013 resumed its seasonal service from Philadelphia to Shannon, Ireland after about a four-year hiatus as the route now is viable for the carrier. 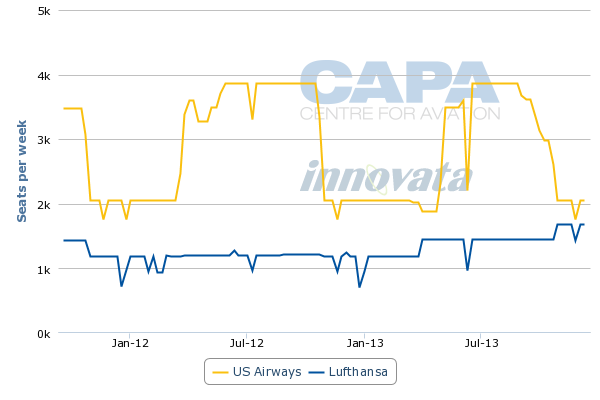 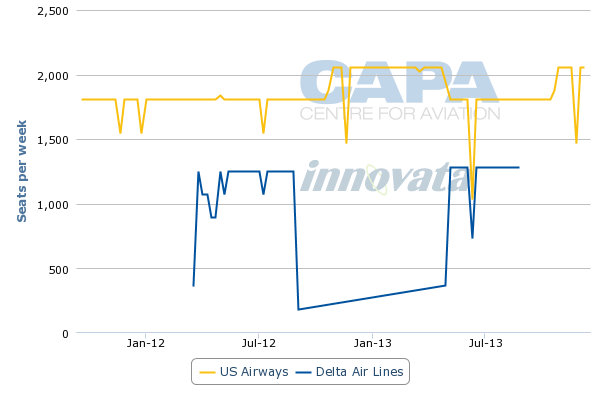 Given its slots portfolio at London Heathrow, BA holds the leading seat share between Philadelphia to Heathrow at nearly 62%.

Even with international route pair overlap with JFK, Philadelphia could generate decent revenues

There is ample overlap in the trans-Atlantic markets US Airways serves from Philadelphia and those offered by American from JFK. Presently American offers flights from JFK to Barcelona, Manchester, Paris, Dublin, Rome, Madrid and Zurich.

Even with the overlap there is an argument that service in both markets – Philadelphia and JFK – could be sustained given Philadelphia’s potential revenue generation to the combined American-US Airways network.

Philadelphia total passengers (total and O&D) and revenues compared with other US Airways hubs: CY2011 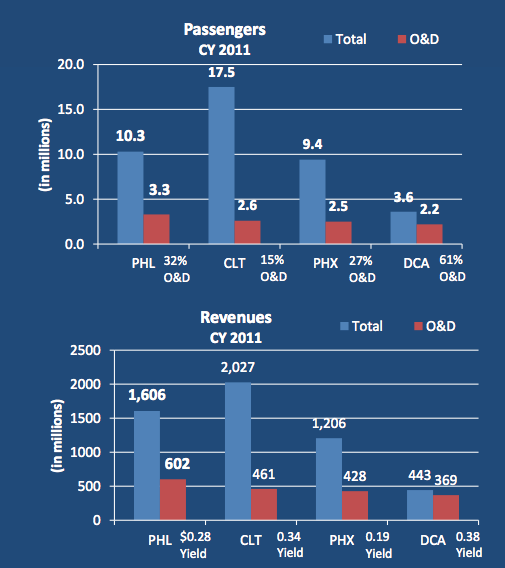 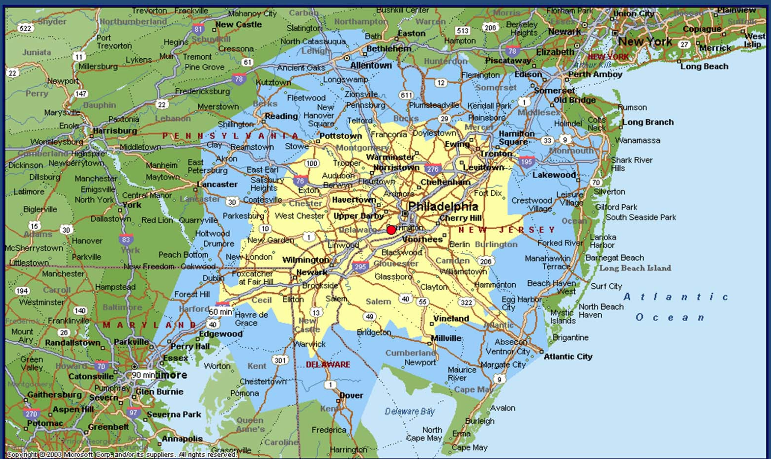 JFK’s catchment area is different from that of Philadelphia, so it would appear that the two airports could co-exist in the same network, given the passenger base for each market has different origins. 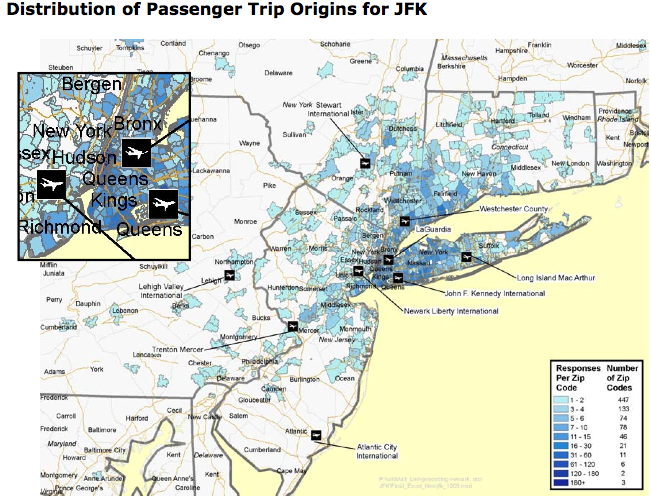 Source: US FAA and Port Authority of New York and New Jersey

Possibilities are positive for Philadelphia; but the market will decide the fate of all nine hubs

It seems that the opportunities to synergise New York and Philadelphia in the combined American and US Airways network could lie in joint scheduling of trans-Atlantic service and capacity management of the international network from the combined hubs. Many of US Airways’ trans-Atlantic routes from Philadelphia are seasonal, so perhaps combined the two carriers could optimise how they manage their trans-Atlantic capacity seasonally from the two airports at a fraction of the effort to attain USD1 billion in projected synergies from the merger beginning in 2015.

While it is probably natural to scrutinise the role of Philadelphia in the “new” American’s network, there is a possibility that a good portion of the international service presently available from Philadelphia could be a viable revenue contribution as the network optimisation unfolds. The fact that most US full service carriers now have centred flying in their relative strongholds should result in a scenario of improving revenue management of a combined network versus eliminating hubs rendered unviable by a tie-up.

Presumably management at the new carrier will keep a pledge that all hubs will remain intact – but like any operation, this will have to justify itself into the future. Perhaps the executive team at the new American should temper expectations that service levels will retain status quo having just witnessed Delta’s painful deconstruction of Memphis over a several year period.

(This is the first in a series of articles looking at merger implications on the hubs in the "new" American Airlines' network).