The A380 (finally) lands in Europe

Friday saw Air France take delivery of the first of 12 A380s due to the carrier. The delivery is as much a celebration for Air France as it is a statement of how the aviation world has changed. Airbus announced last week that "Air France is just about to become the first European airline to receive the A380 - and the fourth operator overall, joining Singapore Airlines, Emirates and Qantas".

Remarkably, this delivery is just over two years later than the first delivery - to Singapore Airlines. That carrier now has ten A380s operating, half of the total delivered so far.

This is an aircraft constructed in Europe, largely in France. Yet airlines in the Asia Pacific and Middle East airlines lead the way in introducing the A380 - as they do with the B787. That is why the major manufacturers are squarely looking at these regions for their future sales. The last European customer for the A380, British Airways, signed its order for 12 A380s more than 24 months ago.

A380 firm orders, deliveries and customers by region 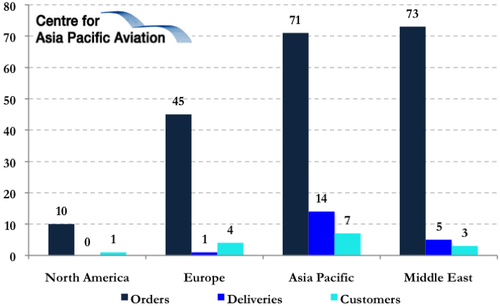 The single customer in North America is aircraft lessor ILFC, the ‘last man standing’ for A380 customers in the US, after FedEx and UPS cancelled their orders for the A380F, due to production delays with the freighter variant.

Airbus is still facing challenges getting the aircraft into full scale production. Having delivered seven aircraft so far this year, the manufacturer is maintaining its goal of delivering 13 in 2009, but admitted that deliveries will ultimately depend on the capacity of airlines to take on the aircraft at the end of the year. Airbus cut its delivery target from 14 to 13 aircraft in Sep-2009.

Production is not expected to accelerate substantially until well into 2010. Airbus's CEO, Thomas Enders, speaking to Reuters last week, stated that the delivery rate of A380s in 1H2010 would be similar to the current level. Airbus’ latest global market forecast sees a market for more than 1,300 “very large” (B747/A380 size) aircraft by 2028.

The Air France delivery news overshadowed a simultaneous announcement by Airbus of its further expansion in China. Airbus signed an MoU to establish a Logistics Centre in Tianjin to optimise the supply chain management for all Airbus' industrial cooperation projects in the country.

Production at the Tianjin A320 final assembly line commenced in Sep-2009, one of the key pillars of Airbus’ internationalisation drive. Airbus expects the Chinese market will need more than 3,200 aircraft over the next 20 years, more than tripling its current fleet as passenger traffic in the country witnesses a fivefold increase.

EADS, parent of Airbus, saw is shares finish Friday 0.7% lower, on a generally weaker market. Boeing traded down 2.1%, while Brazilian manufacturer Embraer lost 13.7% as it forecast a 10% revenue decline in 2010.