Thailand has become the most popular destination for Chinese travellers outside Greater China. Chinese visitor numbers to Thailand are on pace to exceed 11 million in 2018, compared to less than two million in 2011.

Airlines of all types from both countries have benefitted from the rapid growth in Thailand-China travel. However, LCCs in particular have grown rapidly. The LCC penetration rate in the Thailand-China market has grown over the past seven years from only 7% to 44%, and is poised to increase further as all of Thailand’s LCCs are now banking heavily on China as they expand.

Inbound tourism to key ASEAN markets, including Thailand, and the fast growing outbound China market will be a topic of a panel discussion at the CAPA Asia Aviation Summit in Singapore on 8/9-Nov-2018. For more details on the summit click here.

Chinese visitors to Thailand grow at an enormous rate

Chinese visitor numbers to Thailand and year-over-year growth: 2008 to 1H2018 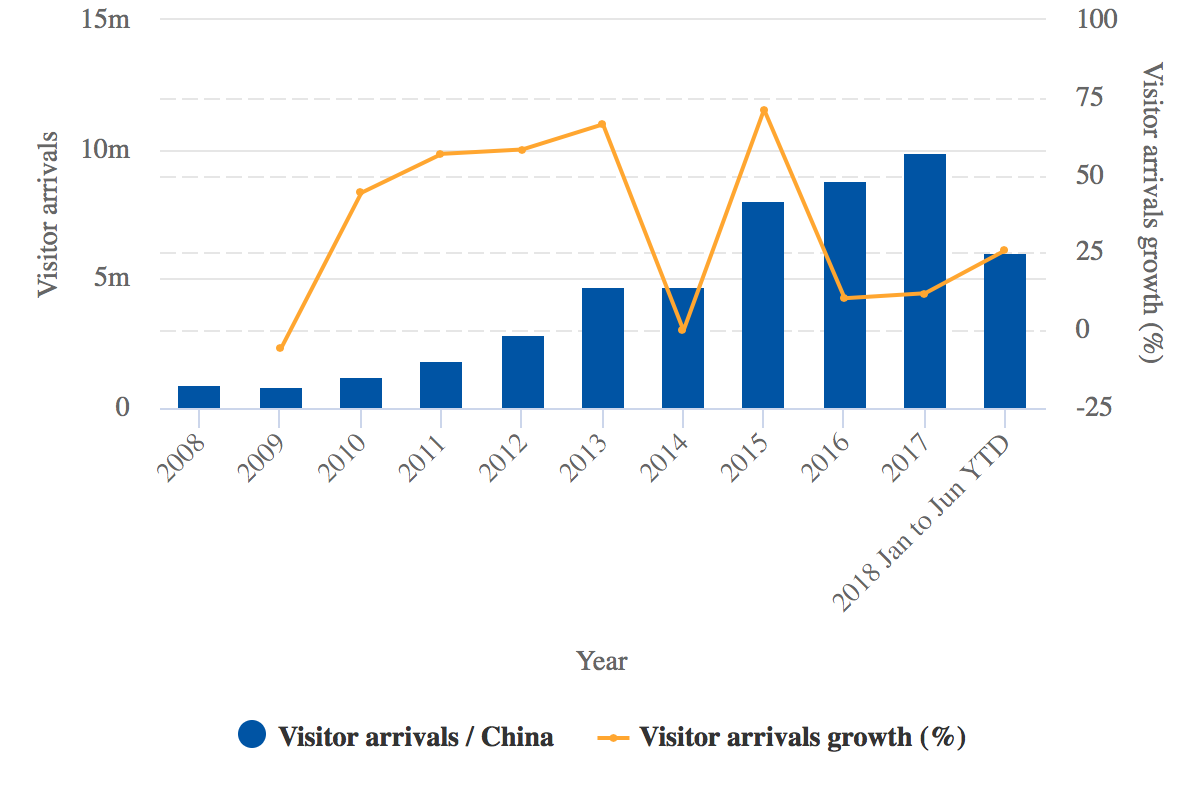 Source: CAPA – Centre for Aviation and Thailand Ministry of Tourism.

Back in 2009, China accounted for only 5.5% of total visitors and China was Thailand’s fourth largest source market – behind Malaysia, Japan and the UK.

Source: CAPA – Centre for Aviation and Thailand Ministry of Tourism.

Thailand-China seat capacity has increased more than fivefold over the past six years. There are currently between 230,000 and 300,000 weekly one-way seats from Thailand to China, depending on the time of year (the market is relatively seasonal).

Total visitor numbers to Thailand will approach 40 million in 2018, compared to only 14 million in 2009. Of the additional 26 million visitors, China has accounted for nearly half.

Tours of Thailand are gigantic business for Chinese agents and their partners in Thailand (most Chinese travel to Thailand as part of packages). Chinese are also generally big shoppers, making their impact on the Thai economy even more significant.

Travel and tourism overall accounts for nearly 10% of GDP in Thailand – or nearly 20% when indirect impact is included. Based on the indirect figure and China’s 30% share of visitors, Chinese visitors will generate approximately USD25 billion for Thailand’s economy this year.

Nine airports in Thailand have services from China

Not surprisingly, China has become the biggest market for all of Thailand’s main international airports.

Nine airports in Thailand currently have fights to China. For eight of these nine airports China is the biggest market.

These are 11 international airports in all of Thailand. Hat Yai and Hua Hin are the only airports that currently have scheduled international services that do not have any links to China.

Phuket is the third Thai largest airport in the Thailand-China market and has more than 50,000 weekly seats to China, accounting for another 20% of total Thailand-China capacity. The six other Thai airports with services to China – Chiang Mai, Chiang Rai, Krabi, Samui, Surat Thani and U-Tapao/Pattaya – all have less than 10,000 weekly seats to China and combined account for only a 15% share of the total.

Notes: all figures are based on the last week of August as October is an off-peak month for Thailand-China travel.
Source: CAPA - Centre for Aviation & OAG.

China dominates the international operations at Phuket and Don Mueang

The chaotic scene these days at Don Mueang’s overcrowded international terminal is perhaps the best indicator of the rapid growth that the Thailand-China market has experienced.

All five of the LCCs based at Don Mueang have pursued rapid expansion in Thailand – Nok Air, NokScoot, Thai AirAsia, Thai AirAsia X and Thai Lion Air. These LCCs currently have approximately 60,000 weekly one-way seats from Don Mueang to China, compared to only 13,000 seats four years ago.

In particular, Thai Lion has expanded its Chinese network rapidly since launching flights to China in early 2016. Thai Lion is currently the largest airline in the Thailand-China market, accounting for approximately a 15% share of seat capacity.

Thai Lion is also now the fourth largest foreign airline in the Chinese market by capacity – and the largest from Southeast Asia (based on weekly seat capacity). Thai Lion operated 28 routes to China this summer: 16 from Don Mueang, nine from Phuket, one from Chiang Mai, one from Chiang Rai and one from U-Tapao.

The Nok brand has approximately an 8% share of Thailand-China seat capacity, when both Nok Air and its sister airline NokScoot are included. Both airlines have only been serving China since 2015. Nok has 13 routes to China: four from Don Mueang, four from Phuket, four from U-Tapao and one from China Mai. NokScoot has six China routes, all from Don Mueang.

NewGen is based at Don Mueang and has expanded rapidly in China over the past two years. New Gen has 22 China routes: 13 from Don Mueang, four from Krabi, three from Phuket and two from Chiang Mai. New Gen has a 4% share of total Thailand-China seat capacity.

Spring is the largest Chinese airline in Thailand

Chinese LCC Spring Airlines is the largest Chinese airline in the Thailand-China market, with a 9% share of seat capacity. Spring has 22 routes to Thailand: 11 to Bangkok Suvarnabhumi, six to Phuket, two to Chiang Mai, two to Krabi and one to Surat Thani.

Suvarnabhumi is the Bangkok airport for almost all foreign airlines, including foreign LCCs. China Express is a rare exception as it operates to Don Mueang.

Notes: all figures are based on the last week of August as October is an off-peak month for Thailand-China travel.
Source: CAPA - Centre for Aviation & OAG.

There are currently 10 Thai airlines competing in the Thailand-China market. Along with the six previously mentioned Don Mueang-based airlines, the other competitors are Asia Atlantic Airways, Bangkok Airways, Thai Airways and Thai Smile.

Asia Atlantic is a small Suvarnabhumi-based charter airline. Bangkok Airways resumed flights to China in 2016 after a seven-year hiatus. Bangkok Airways is focusing on niche China routes from Samui and is the smallest of the 10 Thai airlines competing in the Thailand-China market (with a less than 0.5% share of total seat capacity).

All of Thailand’s LCC brands are banking heavily on China as they expand.

Thai VietJet is the only Thailand-based LCC that does not yet serve China but recently secured CAAC approval for its first Chinese route. Thai VietJet began scheduled services in 2016 and currently operates five domestic routes and one route to Vietnam with a fleet of six A320-family aircraft.

Thai VietJet intends to accelerate expansion significantly; its tentative fleet plan includes two additional aircraft by the end of 2018 and another 10 aircraft in 2019. Thai VietJet plans to focus mainly on China, since Thailand’s domestic market and most regional international markets (to other Southeast Asia countries) are now oversupplied.

Thai VietJet and Thailand’s four more established short haul LCCs have a majority of their capacity in the domestic market. However, after several years of rapid domestic growth, Nok, Thai AirAsia and Thai Lion have shifted focus over the past two years to the international market – particularly China – as domestic growth has slowed.

Nok and Thai Lion have particularly been using new routes to China to reduce their reliance on the domestic market. More China services have enabled an increase in utilisation rates as China services can generally be operated overnight using aircraft that fly domestically (or on short haul international routes within Southeast Asia) during the day.

The yield is also often better on Thailand-China routes compared to the intensely competitive domestic market. Launching new China routes is low risk because on most China routes agents are block booking and guaranteeing most (or in some cases all) of the available seats.

Most of the Thailand-China routes from Nok and Thai Lion are operated under a scheduled charter model. Several of the routes are seasonal and the number of months they operate are decided by the travel agent partners (as well as the number of frequencies).

Chinese airlines also rely heavily on block bookings from agents for their Thailand services, particularly on routes from secondary and tertiary cities in China.

There are more than 50 Chinese cities that are served from Thailand. Only in the main cities are independent travellers common, with flights directly purchased from airlines or online travel agents (along with hotels). For most secondary and tertiary cities, almost all travellers heading overseas for holiday opt for packages from traditional agents.

Chinese airlines often have a competitive advantage over Thai airlines as they have close relationships with local agents and can use their domestic services to feed their international services. Chinese airlines are also able to redeploy capacity easily to different international markets based on the time of year and which destinations are most popular.

Although Thailand is generally one of the most popular destinations for the Chinese, in the past the number of Chinese visitors to Thailand has declined during certain periods. For example, civil unrest in Thailand in 2009 and again in 2014 led to a drop in visitor numbers for the full year.

A crackdown on zero-dollar tours also led to a reduction in late 2016. Chinese visitor numbers to Thailand plummeted by more than 20% in 4Q2016, impacting Thai airlines, although for the full year visitor numbers were still up by 10%, driven by large gains in the first three quarters.

Most recently, there was a drop in visitor numbers in 3Q2018 following a highly publicised boat accident in Jul-2018. A tourist boat in Phuket capsized on 7-Jul-2018, killing 47 Chinese nationals. The incident immediately impacted inbound demand from China, leading to a 1% drop in Chinese visitors to Thailand in Jul-2018 and a 12% drop in Aug-2018 (following an 18% gain in June and 26% increase for the first half of the year, as previously mentioned). Thailand has not yet reported visitor data for Sep-2018.

However, Thailand still expects to meet its original target of 11 million tourists in 2018, which would represent a 12% increase from 2017. (The growth in 1H2018 was faster than initially anticipated.)

The Thailand-Chinese market has typically recovered quickly following incidents that impacted demand. However, if there is a more permanent decline in Chinese visitors numbers to Thailand – or even if the growth slows on a more permanent or annual basis – Thai LCCs will be heavily exposed, given how much they are relying on China in terms of existing capacity and future expansion.

Chinese airlines would not be as impacted as they can easily redeploy capacity to another market. Thai airlines would struggle to find alternative markets because all of Thailand’s other international markets are much smaller, are not growing as fast, and are generally already oversupplied.

China has understandably become a hot market for Thai airlines, particularly LCCs. However, the rapid rate of growth experienced over the past four years may not be sustainable. Thai LCCs could find themselves in a potentially vulnerable position if Thailand-China growth slows, or particularly if the market contracts.