Thai Airways Mar-2011 traffic fell 3.9% to 1.6 million passengers. The Japanese earthquake crisis cut into its operations to Japan over the month from 59 to 52 times weekly, but was compensated by increases in traffic to mainland China, Singapore and Hong Kong. The carrier forecast a loss of USD20 million in monthly revenues as a result of the earthquake and tsunami.

Thai Airways' board approved the conversion of two B747-400 passenger aircraft into freighters. Boeing will deliver the converted aircraft in Mar-2012 and Apr-2012. The airline also approved the short-term lease of two B777-300ERs from Jet Airways. The lease agreement will be valid for two years and the aircraft will be delivered in Oct-2011 and Nov-2011.

The Thai Airways board also approved the results of the negotiation with Bangkok Bank for a further reduction in the interest rate on THAI’s THB8 billion (USD268 million) in borrowings.

Thailand's Transport Ministry reportedly proposed a budget of USD15.25 billion to purchase 75 new aircraft for the carrier. The proposal has been approved by the company's board, and will come under its 2011-2022 business plan. The new fleet will be introduced in two phases: 37 aircraft in phase one between 2011 and 2017 and 38 aircraft between 2018 and 2022.

Also in fleet news, Korean Air completed its six-year fleet retrofit project, refitting 49 of its 68 widebody aircraft and introducing its new product on the 19 new aircraft. The project replaced more than 14,000 seats with new products.

Australia's Regional Express (Rex) released  its first profit guidance for FY2011, forecasting a full-year profit before tax of USD25.2 million, 10% down from the previous year's result of USD28.1 million. The profit after tax will be more severely affected, estimated to be USD18.3 million, some 30% lower than the FY2010 result of USD26.3 million. 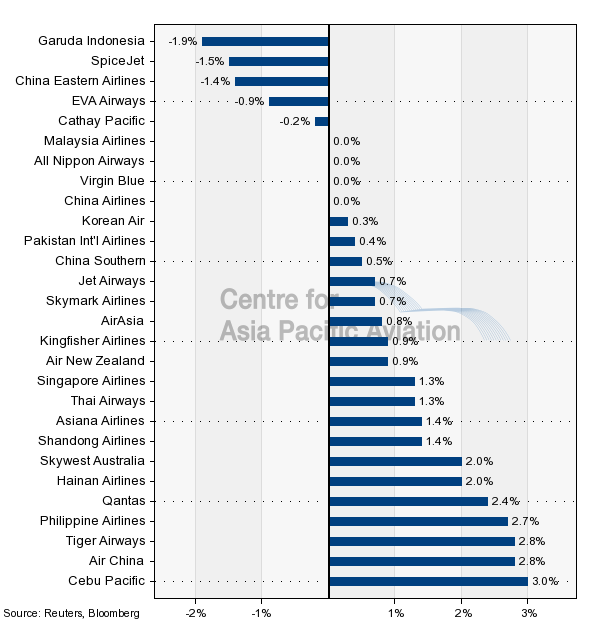