The majority of Asia Pacific airlines' share prices slipped on Friday (10-Jul-09), with Thai Airways, ANA and Kingfisher leading the falls, slipping 6.4%, 5.8% and 5.1%, respectively. Japan Airlines and Cathay Pacific were also down, by 2.3% and 1.3%, respectively.

Contributing to the share price reduction was speculation, later confirmed, that Thai Airways has decided to retain its order for six A380 aircraft, after Airbus stated a cancellation of the contract would result in a legal action and a hefty financial penalty. The carrier now plans to delay the aircraft deliveries, with three to be delivered in 2012 and the remaining three to be delivered in 2013 (the aircraft had originally been scheduled for delivery in Oct-2010 and Jun-2011) and is in negotiations with Airbus to cap the cost escalation.

In news affecting today’s (13-Jul-09) share prices, Virgin Blue shares have been halted until Wednesday, as the carrier plans to announce a significant capital raising on 15-Jul-09. The group plans to raise up to USD400 million through the agreement. Shares in Virgin Blue closed on Friday at AUD0.305.

Meanwhile, China Eastern has made an application to the Hong Kong Stock Exchange for the resumption of trading of H Shares with effect from 09:30 on 13-Jul-09. The carrier, on 10-Jul-09, entered into an "Absorption Agreement" with Shanghai Airlines, under which the two carriers will merge through a share swap. 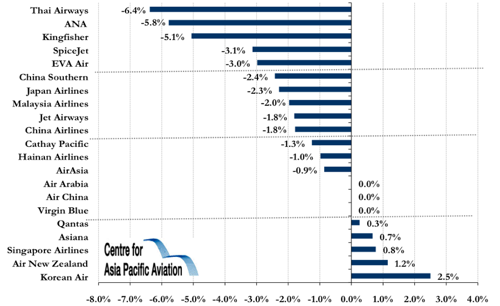