Thai Airways forecasts recovery in 2H2009, but not evident in Jul-2009 traffic

Thai Airways' shares surged 9.9% yesterday, on expectations that a recovery in the tourism sector will occur in 2H2009.

The carrier has previously stated it expects to report a net profit of USD176 million to USD206 million in 2009, after reporting a net profit of USD73.4 million in 1H2009, with demand expected to show signs of improvement in Aug-2009, as the domestic political situation becomes more stable and the economic starts to recover.

However, these improvements were not evident in Jul-2009, with the carrier experiencing a 7.0% reduction in passenger numbers (to 1.5 million), with load factor also weaker in the month, slipping 7.6 ppts to 71.3. Load factors were the weakest on North Pacific services, falling a massive 24.7 ppts to 65.4%. 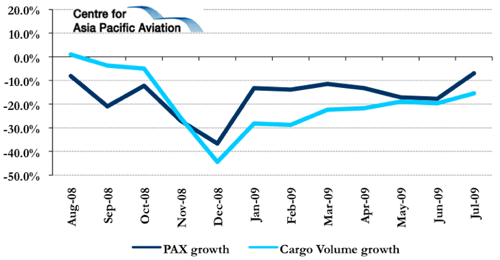 During the month, the carrier’s 5.5% capacity (ASKs) reduction was exceeded by a 12.7% traffic (RPKs) reduction, with contractions to all international markets (in the range of -10.4% for European services and 27.4% for North Pacific services). The carrier, however, increased domestic traffic (+6.6% year-on-year), although this negatively impacted load factors, which slumped 10.8 ppts to 76.1%. 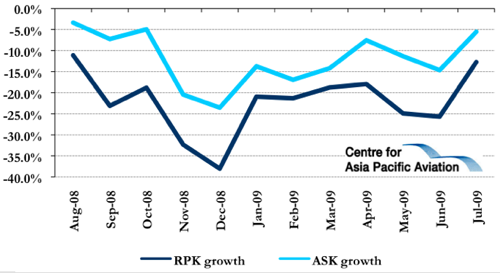 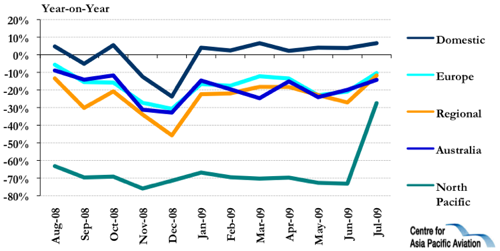 Korean Air's shares gained 0.9% yesterday, as the carrier stated it expects an increase in international passenger traffic in Sep-2009.

However, these seemingly impressive figures hides a darker reality: passenger and cargo yields remained weak, slumping 12% and 35%, respectively, with overall revenue down almost 10%, despite the stronger domestic market.

Looking forward, Air China expects the impact of the global financial crisis on international air passenger and cargo business to continue, with yield weakness to remain, due to the “overly rapid increase in traffic capacity by the domestic airlines” and “intensified price competition”. The carrier will also be negatively affected by the fluctuation of the exchange rate and rising fuel prices, which will increase the carrier’s cost base.

Also in China, Shandong Airlines remained profitable in 1H2009, with an operating profit of USD5.3 million and net profit of USD16.5 million, with the carrier expecting to return to net profitability in 3Q2009.

Japan Airlines, meanwhile, fell 1.7%. The carrier is reportedly considering separating low-margin international routes into a new company or transferring them to subsidiary, JALways.

The move would allow JAL to focus on higher-yielding, business-focused routes and, along with anticipated personnel cuts, would be expected to result in JPY100 billion (USD1.1 billion) in annual cost savings. The carrier, however, is forecasting a net loss of JPY63 billion (USD670 million) for the 12 months ended Mar-2010. 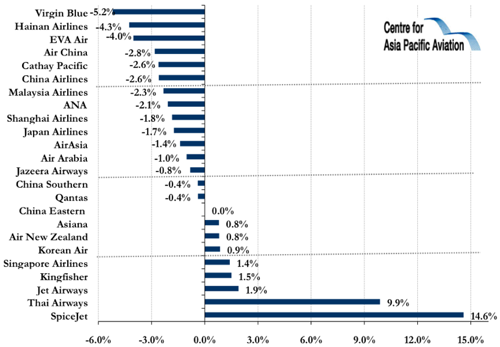