Thai Airways and Tiger Airways signed an initial shareholders agreement, necessary to establish a new JV LCC, Thai Tiger Airways. THAI plans to invest USD3.3 million for a 49.9% stake in the LCC, although the investment is still pending regulatory approval. Tiger Airways will hold 39.0% of the paid-up share capital. RyanThai Ltd is a co-investor in Thai Tiger which will hold 10% of the paid-up share capital. The remaining 1.1% will be held by individual Thai shareholders. Shares in Tiger Airways finished 2.3% lower on Monday, while Thai Airways shares were 3.4% higher.

AirAsia X confirmed its plans for an IPO in 2011 are running on schedule, although it is still awaiting regulatory approval for its route expansion plans. CEO Azran Osman-Rani stated the uncertainty in the route allocation policy does not make it conducive for the carrier to list, however, route allocation was not the most important factor, adding that the equity issue is more prominent. According to AirAsia founder Tony Fernandes, the company may be dual-listed, possibly on a US bourse as well as on the Malaysian stock exchange. AirAsia shares closed 1.2% higher.

Cebu Pacific stated JG Summit Holdings acquired 653,940 shares of the airline on 25-Feb-2011, when the stock slumped to a record low. 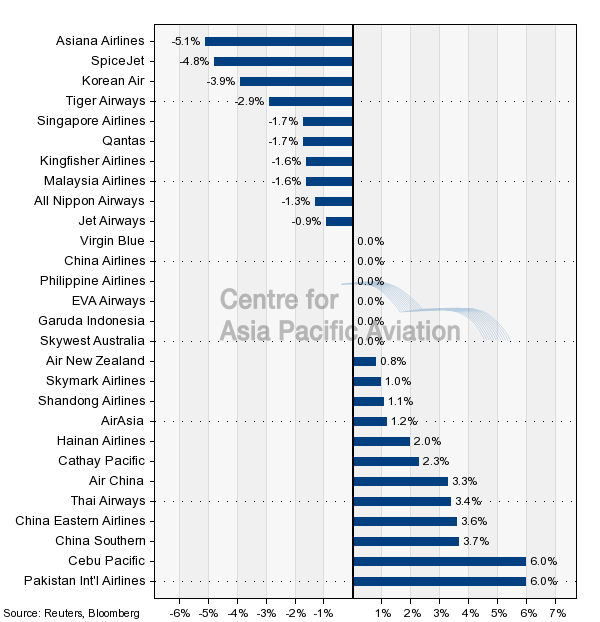