Thai Airways is planning modest expansion for 2016 as the airline attempts to complete a turnaround and restore profitability. The group’s fleet will grow by only two aircraft in 2016, but capacity increases are expected through aircraft utilisation improvements, both at the mainline airline and at the full service regional subsidiary, Thai Smile.

Thai has been implementing a transformation plan over the last year, with a focus on cutting the size of its workforce, its fleet, and the long haul network. Yet from a capacity standpoint Thai is again approaching pre-restructuring levels, and has reversed most of its cuts to Western Europe.

The Thai Airways Group ended 2015 with 97 aircraft in service, including 75 widebody aircraft and 22 narrowbody aircraft.

The group began the year with 102 aircraft in service, including 83 widebodies and 19 narrowbodies. The net result for the year was a widebody reduction of eight aircraft (including two freighters), and a narrowbody expansion of three aircraft.

Thai’s widebody fleet also shrank by two aircraft in 2014, while the narrowbody fleet grew by four aircraft in that year. These figures include the 100% owned regional subsidiary Thai Smile, which currently operates most of the group’s A320s, but the figures exclude low cost affiliate Nok Air, or its long haul JV NokScoot. Thai has a 39% stake in Nok, which has a separate listing on the Stock Exchange of Thailand and has a 49% stake in NokScoot.

Thai Airways Group ASKs (in billions) and year over year growth for Jan through November: 2009 to 2015 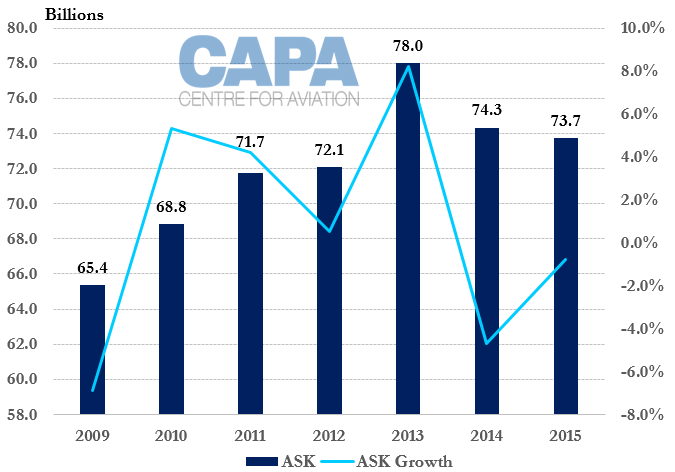 The above figures include Thai Airways and Thai Smile. Thai Smile was launched in 2012 and the group initially provided separate operating figures, but in 2014 the group stopped providing separate figures for the subsidiary.

Group figures provide a better reference for comparison, as Thai Smile has primarily been used to take over routes or flights from its parent. Further complicating any analysis of Thai Smile specific figures, the group had to place several A320s at Thai Airways in 2014, for use on international routes that were initially operated by, or intended for, Thai Smile.

As CAPA has previously highlighted, regulatory restrictions prevented Thai Smile from operating some international routes after it transitioned from a unit to a subsidiary in mid-2014, with its own air operators certificate (AOC). Several international flights are still currently operated under the Thai Airways AOC, but with A320s featuring the Thai Smile product.

Thai Smile aims eventually to take over all of the group’s A320s, enabling Thai Airways to complete a planned transition to an all-widebody fleet. Thai Airways still operates two 737-400s also, currently slated to be phased out in 2017.

Barring any further regulatory hiccups, the transition of the A320 fleet to Thai Smile should be completed in 2016. The transition will reduce the cost of the A320 operation and support the group’s overall efforts to return to profitability. While it is considered a full service carrier, Thai Smile has a much lower cost structure than Thai Airways. (The Thai Airways A320 operation has been cost prohibitive, impacting the group's overall profitability, because the operation has had to allocate and train mainline A320 pilots, who are paid more than Thai Smile pilots.)

Utilisation has also been sacrificed because Thai Smile has mainly been forced to operate domestically. As it expands its international network in 2016 – with a combination of new routes and taking back A320 routes that have temporarily been operated by Thai Airways – Thai Smile will be able to improve its utilisation. The mechanism for this will be operating international flights during the overnight hours, while using the same aircraft for domestic or short haul international flights during the day.

The group expects significant growth in the ASKs generated by the A320 fleet in 2016. Thai Airways currently has no commitments for additional A320s, but there will be some annual ASK growth (aside from the growth from higher utilisation) because the last two aircraft from the initial order were delivered in late 2015.

Thai Smile recently unveiled plans to launch service to Siem Reap from 1-Feb-2016, initially with 10 flights per week. Siem Reap is a popular destination from Bangkok, particularly for passengers connecting at the capital.

It is somewhat surprising that Thai Airways has not had any presence in Siem Reap, given the rapid growth in traffic at Siem Reap Airport over the last several years, and the large size of the Bangkok-Siem Reap market. Siem Reap is a logical destination for Thai Smile, as it is a short flight from Bangkok – only about an hour. Narrowbody operation makes sense as it enables more frequencies, which is important for offering convenient connections. Siem Reap will be a particularly important new destination for sales in Europe, where Thai still has an online network of 11 destinations.

The Thai Airways Group already serves the Cambodian capital Phnom Penh, with 17 weekly A320 flights. Regionally the group is now using the A320 fleet on all flights to Penang in Malaysia, Luang Prabang and Vientiane in Laos, and Mandalay in Myanmar. Thai Smile also recently began operating flights to Yangon in Myanmar alongside Thai Airways. Like Cambodia, Myanmar and Laos are large connecting markets for Bangkok, and are the main international markets for Bangkok Airways.

The Airways Group also currently uses the A320 fleet to serve Macau and Chongqing, and to operate some of its flights to Xiamen. Thai Smile is an important component of Thai’s strategy for expanding in the Chinese market. Thai Airways Group president Charamporn Jotikasthira told CAPA in Nov-2015 that the group is looking at several new Chinese destinations, using a combination of Thai Smile and Thai Airways mainline.

China is already the group’s second largest international market after Japan, but it only accounts for a relatively modest 5% share of the group’s international seat capacity. There are clearly opportunities for China growth, particularly new services to secondary cities.

Demand in the China-Thailand market has been increasing rapidly: Thailand recorded a 74% increase in visitor numbers from China through the first 11 months of 2015. China is now the largest source market for Thailand, accounting for about 25% of all arrivals.

Thailand tourist arrivals from China and year over year growth: 2008 to 11M2015 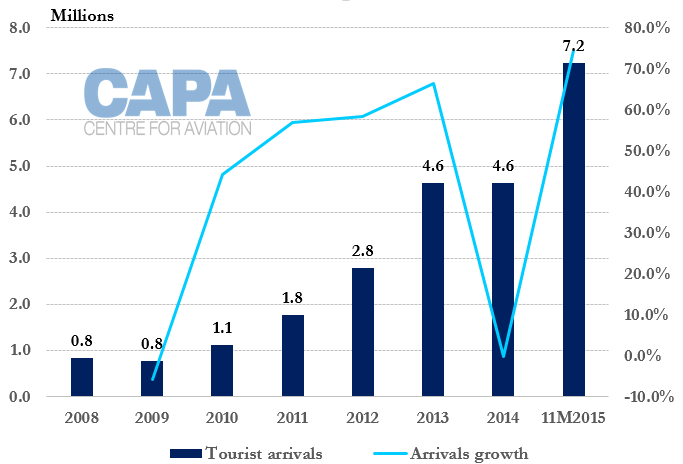 Note: 2015 figure is for first 11 months only
Source: CAPA - Centre for Aviation &  Thailand’s Ministry of Tourism and Sports

The Thai Airways Group currently has only an 11% share of non-stop scheduled seat capacity in the Thailand and China market, according to CAPA and OAG data. Its share has slipped by about 7pt from 18% one year ago since Thai’s capacity to China has been flat, while the overall market has had a more than 60% increase in capacity.

More transit traffic will be key focus for 2016

In addition to securing a larger share of the booming inbound market Thai Airways is keen to carry more connecting traffic from China to destinations beyond Bangkok. In particular, new services to secondary Chinese cities, which generally do not have non-stop services to markets such as Australia or Europe, could attract a large share of connecting traffic.

As CAPA has previously highlighted, Thai has implemented a new commercial strategy that focuses on boosting transit traffic. Schedules have been adjusted to improve connectivity, while marketing initiatives are under way to push the sales of certain city pair markets, such as from Australia to Southeast Asia and Europe.

The airline is hoping that the additional transit traffic will help drive up load factors, as well as yields. The load factor through the first 11 months of 2015 was up 6.7ppt to 73%, but Thai is confident of further load factor improvements in 2016, with potentially record load factors. Thai had an average load factor of 74.1% in 2014 and 76.6% in 2013, its highest load factor in several years, but its load factor dropped to a dismal 69% in 2015.

While more transit traffic and higher loads generally come with a yield penalty compared with local traffic, there are opportunities for Thai to improve yields by focusing on a different mix of city pairs, and introducing a new revenue management system. A new campaign to attract higher yielding premium traffic and more corporate traffic, including connecting business class traffic, is also expected to improve yields.

Thai should be able to reduce its reliance on the inbound market, which has traditionally undergone wide fluctuations in demand. Thai suffered from political instability in Bangkok for most of 2014, forcing it to cut capacity, particularly to regional destinations.

The group continued to cut capacity in 2015. While regional capacity was generally restored, Thai cut its long haul network as it implemented its transformation plan. Johannesburg, Madrid, Moscow and Los Angeles were suspended in 2015, reducing Thai’s long haul network from 15 to 11 destinations.

Nevertheless, Thai capacity has been inching back up, and its annual ASKs for 2016 are actually expected to be higher, after two years of declines. Capacity to Europe for the current northern winter season is roughly at the same level as in the last two winter seasons.

In fact, in Oct-2015 Thai reinstated second daily frequencies to both Frankfurt and London, only six months after they were dropped. Although Thai will revert to one daily flight during off peak northern summer months in 2016, the original plan was for one daily flight in both markets year round.

Thai has also reversed an earlier decision to cut Rome, which would have left it with 10 long haul destinations. Thai initially announced the suspension of Rome in Jul-2015, intended to be effective from late Oct-2015.

It then decided to delay the suspension until Feb-2016, and has decided to maintain the Rome service recently, with flights now being sold for the 2016 northern summer season.

Based on current schedule data from OAG, Thai’s seat capacity to Europe in Jun-2016 will be roughly flat compared with Jun-2015. Meanwhile the group’s regional international capacity within Asia Pacific will be up slightly, and capacity to the Middle East will be flat. The group has about 50 international destinations within Asia Pacific but a limited network in the Middle East, with just two destinations – Dubai and Muscat. 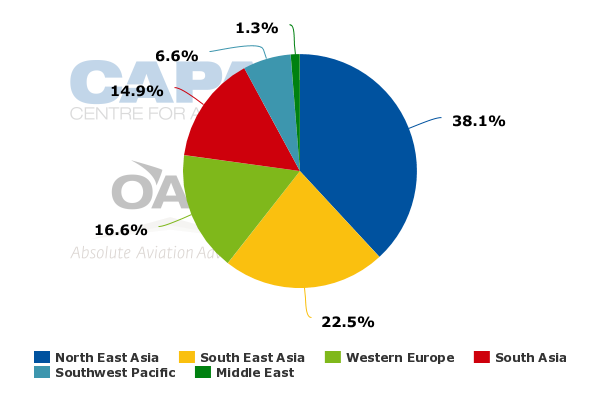 Thai Airways fleet to expand by two aircraft in 2016

Thai plans to take delivery of only two aircraft in 2016: two A350-900s that are slated to be delivered around the middle of the year. Even so, a modest increase in capacity is expected to be driven through aircraft utilisation improvements.

Thai is bullish, but challenges remain

Thai enters 2016 confident that it can turn a profit for the first time since 2012. Fuel hedges will start to wind down, enabling Thai to benefit more from the lower fuel prices. Efficiency levels will improve as aircraft utilisation rates increase and savings from voluntary redundancies start to kick in, a programme implemented in 2015 but at a high short term cost.

After a challenging end to 2015, Mr Charamporn expects yield improvements from Jan-2016, boosted in part by a new revenue management initiative. The market quickly recovered in early 4Q2015, following a temporary dip in the immediate aftermath of the 17-Aug-2015 Bangkok bombings, but Thai noticed lower than usual demand in the Bangkok market in late 2015, typically a peak period for travel, which pressured yields.

Short and long haul competition in Thailand will continue to intensify in 2016, driven by further capacity increases from the Gulf carriers and LCCs.

Market conditions in Thailand can also change very quickly and are hard to predict, given the often turbulent political environment.

Completing the turnaround will not be easy.

Thai’s capacity levels remain relatively high. The group will need to remain flexible with its fleet strategy, and be ready to make further commercial adjustments. Hopefully without too much political interference.