Thai AirAsia is planning further growth in China as it continues to expand its fleet rapidly. The LCC is planning to add five to six aircraft per annum over the next few years and allocate approximately half of the additional capacity to China, which is already by far its largest international market. India is another focus area for Thai AirAsia.

A large portion of the additional aircraft will be based at secondary cities. Approximately 30% of Thai AirAsia’s fleet is now based outside Bangkok, compared to 15% two years ago, and this portion will continue to increase as the airline expands.

Thai AirAsia is particularly keen to grow its base at U-Tapao near the resort of Pattaya, which opened in Sep-2015 and now has two aircraft. Thai AirAsia plans to expand the U-Tapao/Pattaya base by one or two aircraft in 2017, enabling new routes to China. Thai AirAsia is also considering the launch of international services in 2017 from Khon Kaen, which could become its seventh base and the fifth gateway for services to mainland China.

Thai AirAsia currently operates a fleet of 50 aircraft, including 49 A320ceos and one A320neo, across a network of 49 destinations (21 domestic and 28 international). The airline plans to take delivery of its second A320neo by the end of 2016, resulting in growth of six aircraft for the full year – more than any other AirAsia Group subsidiary or affiliate.

Through the first three quarters of 2016 Thai AirAsia’s ASKs were up 16%, and passenger numbers were up 19% to 12.86 million. Thai AirAsia has generated consistent high double-digit ASK growth for several consecutive years, including 18% in 2015 and 19% in 2014.

Thai AirAsia is planning to add five aircraft in 2017 – all A320neos. The airline’s current five-year fleet plan envisages a fleet of 71 aircraft by the end of 2020.

China to account for half of Thai AirAsia’s growth

Thai AirAsia CEO Tassapon Bijleveld told CAPA TV on the sidelines of the 28-Oct-2016 ACTE-CAPA Global Summit in Amsterdam that the airline expects to grow its fleet by an average of five to six aircraft per annum over the medium to long term. He said approximately half of these aircraft will be used to expand in China. 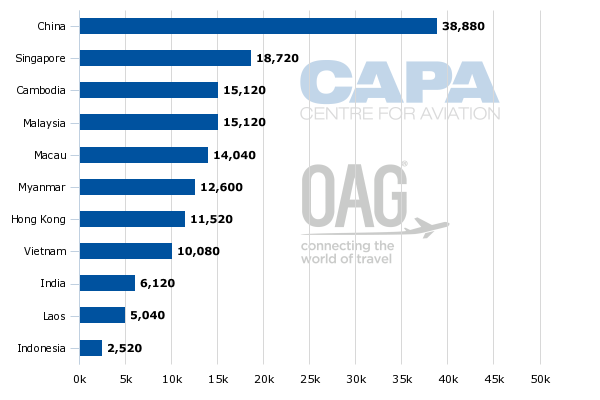 The much smaller Thai AirAsia X has another 6,786 weekly seats across two routes in the Thailand-China market. Mainland China accounts for 18% of Thai AirAsia X’s international capacity.

AirAsia’s remaining five Thailand-China routes are operated from Thai AirAsia’s secondary bases. This includes two routes from Chiang Mai (CNX) in northern Thailand, two from U-Tapao/Pattaya (UTP) in eastern Thailand and one from Phuket (HKT) in southwestern Thailand. Thai AirAsia also operated flights to China from Krabi until late Oct-2016, when it suspended the Krabi-Guangzhou route. 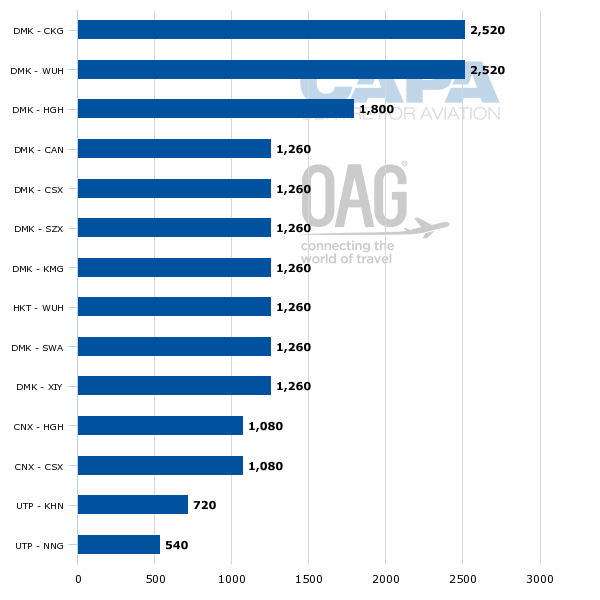 One of Thai AirAsia X's China routes is daily (Shanghai), while the other (Shenyang) is served with only two weekly flights. 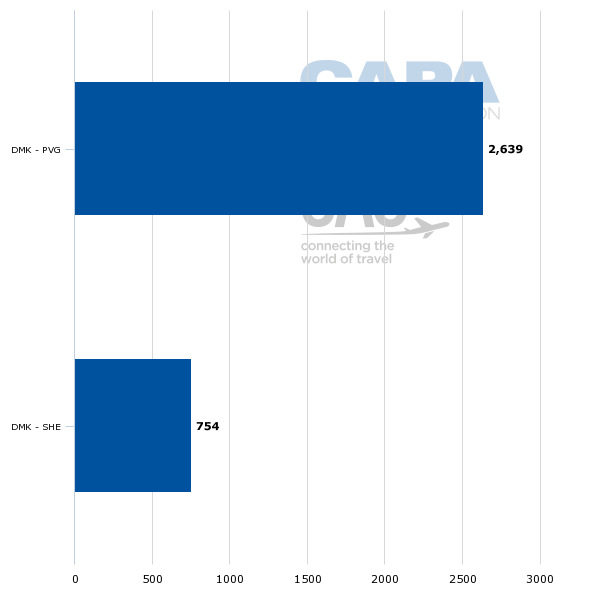 Over the past two years Thai AirAsia has been focusing mainly on growth opportunities from secondary gateways. Of its current five routes connecting secondary Thailand gateways with China, it has launched four within the past 15 months.

U-Tapao to Nanchang and Nanning were launched in Sep-2015, when Thai AirAsia opened a base at U-Tapao. Phuket to Wuhan was launched in Feb-2016, and Chiang Mai to Changsha in May-2016.

Chiang Mai-Hangzhou is Thai AirAsia’s longest-standing route connecting a secondary gateway in Thailand with mainland China, having been launched in Feb-2014. (The recently suspended Krabi-Guangzhou route was initially launched in Nov-2014.)

Thai AirAsia is now looking at further expansion for 2017 from secondary gateways to China. Mr Tassapon told CAPA that Thai AirAsia plans to launch more Chinese routes from U-Tapao/Pattaya in 2017. He said the airline plans to add one or two aircraft to the U-Tapao base in 2017.

Thai AirAsia now has two A320s based at U-Tapao operating three domestic and four international routes – including the two mainland Chinese routes, Macau and Singapore. Mr Tassapon said all the U-Tapao routes “are doing very well”, and that the Pattaya market is promising.

Prior to Thai AirAsia’s launch of services from U-Tapao the airport only had limited domestic service from Bangkok Airways and the small regional airline Kan Air. U-Tapao offers an uncongested alternative for accessing Pattaya, which is less than 150km from Bangkok, and other areas of eastern Thailand which previously were only accessible by driving from Bangkok.

Thai AirAsia will also likely launch services to China from Khon Kaen in northeast Thailand in 2017. Mr Tassapon said the airline had been working closely with the Khon Kaen province since early 2016, with the objective of launching services to China.

He said the initial target is a service to Kunming from Khon Kaen. Mr Tassapon said the new route would be an experiment of sorts, as that part of Thailand had never been connected with China. “It may work [or] it may not, but let’s try,” he said.

Mr Tassapon said the five secondary bases will have a combined 13 to 15 aircraft at the end of 2016. In Nov-2014, two years ago, Thai AirAsia had only six aircraft based outside Bangkok.

The most recent new base is Hat Yai, which opened in Apr-2016 as Thai AirAsia launched services from Hat Yai to Chiang Mai, Johor Bahru (Malaysia) and Khon Kaen. In Aug-2016 Thai AirAsia also took over Hat Yai-Kuala Lumpur services, which were previously operated by Malaysia AirAsia.

Mr Tassapon said Thai AirAsia is now looking at opening routes from Hat Yai to Hong Kong, Macau and Singapore. Destinations in mainland China are also likely to be under consideration given the airline’s focus on expanding in China, particularly from secondary gateways.

China is critical for Thai AirAsia

China has become a critical market for Thai AirAsia and the airline has clearly benefitted from rapid growth in inbound visitor figures from China.

Thailand reported a 71% increase in visitor numbers from China to 7.9 million in 2015, and a further 21% increase through the first eight months of 2016. Mr Tassapon told CAPA TV that AirAsia now carries approximately half of the Chinese residents visiting Thailand. 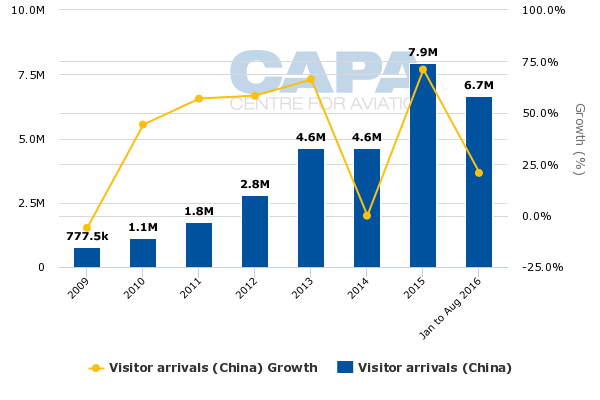 Mr Tassapon said during a panel discussion at the ACTE-CAPA Global Summit that most of Thai AirAsia’s China traffic is inbound. He added that Chinese airports often offer attractive packages to support new international routes and that he expects the number of Chinese airports offering such packages will surge, given the boom in airport construction in China.

However, Thai AirAsia has noticed that inbound demand in the Thailand-China market has been weakening since mid Sep-2016. The weaker demand is due mainly to a clampdown on zero-dollar tour packages which had been offered by Chinese agents. The packages essentially cover air fare and hotels but tourists end up overpaying for goods at tour operator-affiliated shops.

The clampdown impacted approximately 10% of Thai AirAsia’s Chinese demand and contributed to a 3% decrease in international RASK in 3Q2016. Thai AirAsia remained profitable in 3Q2016, with the airline’s operating profit increasing 33% to THB1.2 billion (USD34 million), but profits were smaller than initially projected.

Thai AirAsia has already slightly reduced capacity to China for 4Q2016. The slowdown in growth from China could result in Thai AirAsia delaying some of its plans for adding capacity to China in 2017. However, over the medium to long term the airline remains bullish on the Chinese market and will likely stick to its objective of allocating approximately half of its additional capacity China.

Thai AirAsia will not put all its eggs in the China basket – even if the demand environment improves – as the airline is keen to pursue a diversified approach and not rely too much on the sometimes fickle Chinese market. There are particularly promising opportunities to grow in India, as well as regionally within the Indochina region.

Thai Air Asia’s most recent new route connects Phuket – one of its five secondary bases – with Siem Reap in Cambodia. The airline previously only operated services from Bangkok to Siem Reap – one of its most popular international routes – with three daily flights. Phuket-Siem Reap was launched on 7-Nov-2016 with one daily flight.

“The Indochina region is doing well for us”, Mr Tassapon told CAPA TV. “But the most outstanding one is Siem Reap.”

Earlier in 2016 Thai AirAsia launched flights from Bangkok to Luang Prabang and Vientiane in Laos. The airline is also keen to continue expanding its operation in Myanmar and Vietnam.

Thai AirAsia initially suspended services to Kolkata in Sep-2012. Mr Tassapon said the airline struggled with India point of sale back in 2012, but now the airline should be able to generate more local sales by leveraging its new sister airline AirAsia India.

“I think it was a bit too early. We didn’t know the market well”, Mr Tassapon said, referring to when Thai AirAsia was serving Kolkata in 2012. “Now we have our sister company in India, AirAsia India, so we are much better with branding and distribution. We are ready to go back.”

Mr Tassapon added that Thai AirAsia is keen to expand its presence in India significantly. “To balance our portfolio we are very much focused on India”, Mr Tassapon said. “But India is not yet open skies." For ASEAN carriers India does allow unlimited access to 18 non-metro Indian cities - but currently has no plans to allow open skies on the major cities, which will remain subject to existing bilateral controls.

Indian visitor numbers to Thailand were up 15% in 2015 and 14% in the first eight months of 2016 – more than offsetting a reduction from 2014, when Thailand experienced political instability. India is now Thailand’s sixth largest source market, while Thailand is the second largest outbound destination from India, after Dubai. 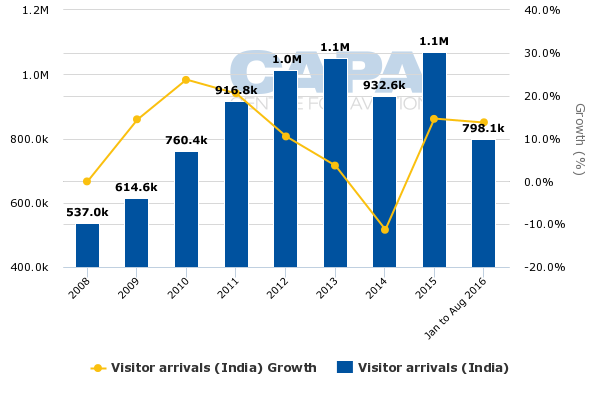 An expanded presence in India also gives Thai AirAsia a more diversified network, since it has a limited number of destinations to the east.

Thai AirAsia X is now considering the launch of services to Eastern Europe in 2017, resulting in an even more balanced hub for AirAsia at Bangkok Don Mueang. Mr Tassapon told CAPA that Budapest, Prague and Warsaw are under consideration.

Eastern Europe is a relatively large, but underserved, inbound market for Thailand. There would also be opportunities to offer connections within Asia, on Thai AirAsia, to Thai AirAsia X passengers flying in from the Czech Republic, Hungary and Poland.

Over the past two years Thai AirAsia has had several successful experiments with secondary bases and point-to-point routes – both domestic and international. The airline will continue to pursue opportunities from secondary gateways but at the same time strategically needs to continue growing the Bangkok hub. With the Bangkok-China market relatively saturated and highly competitive, India and Eastern Europe are attractive options.