Thai AirAsia is planning more rapid expansion in 2014 despite the challenging market conditions in Thailand. The carrier aims to grow passenger traffic by 27% in 2014 to 13.3 million as eight A320s are added to its fleet for a total of 43 aircraft.

Among all the existing AirAsia short-haul affiliates, Thai AirAsia is pursuing the fastest growth in 2014 and is alone in opting against slowing down fleet expansion. The decision to continue with rapid expansion is strategic as AirAsia seeks to maintain its leading position in Thailand’s low-cost sector as competition increases. 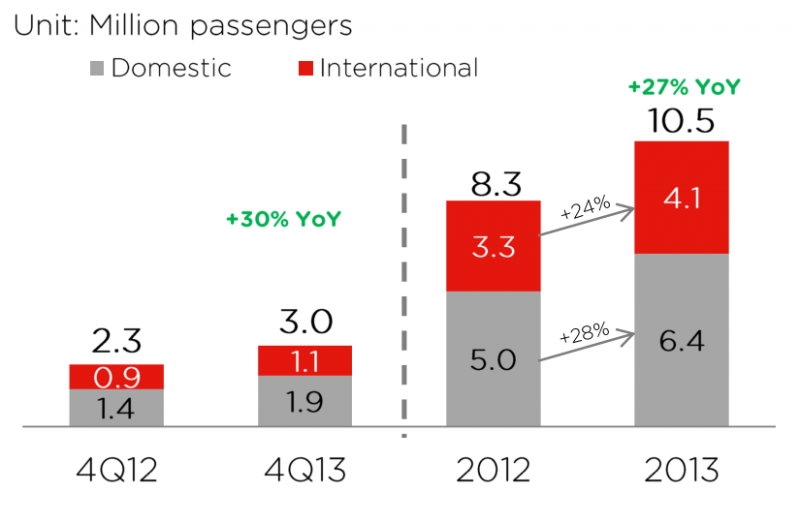 TAA particularly made a domestic push in 4Q2013 as it added two domestic destinations, Khon Kaen and Phitsanulok, giving it 15 destinations in Thailand and 19 domestic routes. The carrier also added at least one daily frequency on six of its 12 existing domestic routes from Bangkok and launched Chiang Mai-Krabi as its fifth point-to-point domestic route.

AirAsia is striving to retain or increase in 2014 its 28% share of Thailand’s domestic market as competition intensifies. TAA cannot afford to slow down its domestic expansion if it is to achieve this strategic objective. As CAPA reported in two earlier instalments in this series of analysis reports on the Thai market, TAA’s two main LCC competitors – Nok Air and Thai Lion Air – both plan to focus expansion in 2014 on the domestic market.

Overall Thailand’s LCC jet fleet is projected to expand by about 50% in 2014. If TAA joined other AirAsia affiliates in deferring fleet expansion, it would have not had sufficient additional aircraft to keep up with its competitors.

Note: Excludes Orient Thai, which is now primarily an international charter and leisure carrier as its domestic low-cost operation has been reduced to only one route.
Excludes turboprops (Nok has two ATR 72s, just ended wet-lease of six Saab 340s and is taking two Dash 8s this year. Thai Lion is adding one ATR 72 this year).
Source: CAPA – Centre for Aviation

Thailand’s domestic market grew by 26% in 2013 to 22 million passengers, according to Thai DCA data. Even with its rapid expansion TAA was just barely able to keep up with the market. TAA sees a need to continue expanding at the same clip in 2014 as its rivals continue to expand rapidly and as yet another new LCC enters the market.

The slower albeit still double-digit domestic growth is mainly driven by a slight reduction in traffic among full-service carriers. AoT reported LCC domestic growth of 20% for the first two months of 2014.

At Bangkok Don Mueang Airport, which is the base for TAA, Nok and Thai Lion, domestic traffic was still up a very healthy 25% through the first two month of 2014. In Dec-2013, the first full month after the unrest began and the month that Thai Lion launched services, domestic traffic at Don Mueang was up 29%, slightly surpassing the 27% and 28% figures for Oct-2013 and Nov-2013 respectively.

On the other hand, the impact on the international LCC market is obvious.

Don Mueang’s international passenger traffic was flat in the first two months of 2014 with a 5% drop in Feb-2014 and a 4% increase in Jan-2014. Every month since Nov-2013, when the civil unrest in Bangkok began, has seen slower year over year growth. 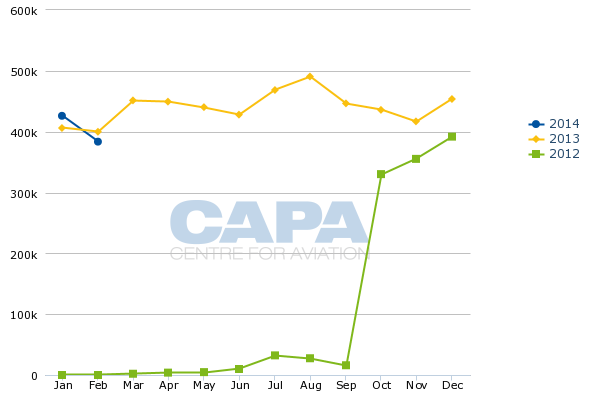 Note: Traffic figures from prior to Oct-2012 are very low as Thai AirAsia moved from Bangkok Suvarnabhumi to Don Mueang in Oct-2012
Source: CAPA – Centre for Aviation & company reports

The Thailand-China market has particularly been impacted with TAA reportedly seeing a drop of almost 30% in Chinese passengers while traffic from regional international destinations within Southeast Asia has been down about 15%. China is TAA’s biggest market, accounting for about 23% of its international seat capacity, according to CAPA and OAG data. 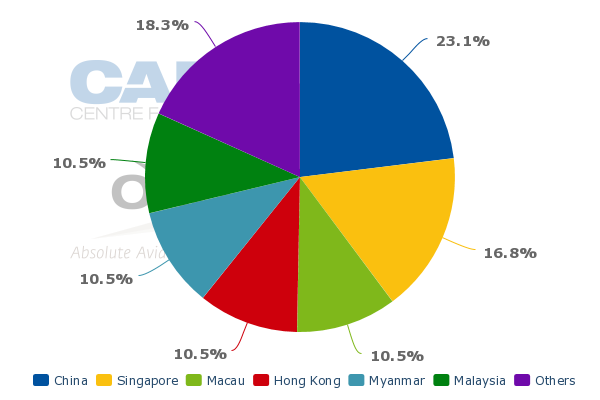 The decision to continue expanding in the international market is financially impacting TAA, which reported a 42% drop in net profit in 4Q2013 after recording higher profits for the first three quarters (see background information). But expansion is strategically important as it allows the carrier to build its already leading share of the international market.

Thailand’s other LCCs will eventually start to focus more on the international market. But by the time this occurs TAA will have built up such a strong position it could be challenging for other carriers to have a significant impact. 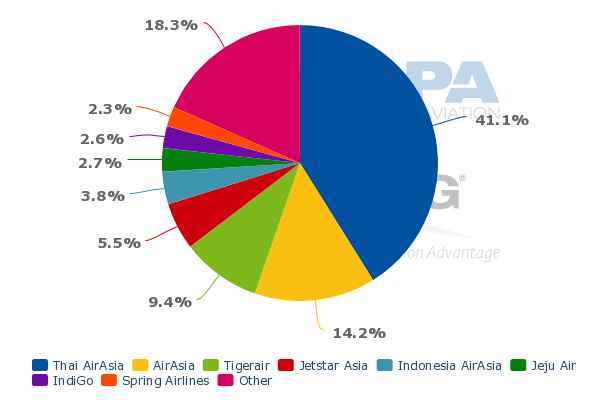 As a group AirAsia is keen to leverage its strong position in Thailand’s international market by pursuing rapid growth. This will be executed by a combination of expansion from TAA and long-haul low-cost start-up Thai AirAsia X (TAAX). As CAPA reported in a previous instalment in this series of analysis reports, TAAX plans to launch scheduled services in 4Q2014 and will initially focus on Japan, followed potentially by services to Korea and Australia.

TAA will focus mainly on continuing to build its position in its main international markets, particularly greater China. While TAA’s total share of the international market in Thailand is only 9%, the carrier currently has a 15% share of seat capacity from Thailand to China, 11% to Hong Kong and 59% to Macau.

Over the last six months TAA has increased its seat capacity to China by 38% despite the civil unrest in Bangkok. The carrier in Jan-2014 launched services from Bangkok to Changsha, its seventh destination in mainland China. In Feb-2014 it launched service from Chiang Mai in northern Thailand to Hangzhou, which it already served from Bangkok.

TAA also links Chiang Mai with Macau and in Jan-2014 added service from Chiang Mai to Hong Kong. The focus on Chiang Mai, where TAA reopened a base in late 2013, is important as it helps the carrier reduce its reliance on Bangkok.

The carrier is now evaluating several potential mainland China routes from Chiang Mai as it plans to continue expanding its China operation in 2H2014, when it takes delivery of six additional A320s. (The first two of TAA’s eight A320 deliveries for 2014 were in 1Q2014 and the carrier does not have any deliveries scheduled for 2Q2014.)

Northern Thailand has seen a huge influx of Chinese tourists, spurred on by a popular Chinese movie that was filmed in the region. TAA had to work closely with the Chiang Mai airport to support the new Hangzhou flight as the flight lands in the middle of the night and Chiang Mai is not a 24-hour airport. TAA has had to pay extra to keep the airport and immigration and customs facility open but believes the revenues generated by the flight justify the extra cost.

With the infrastructure now in place it would be logical for TAA to expand the Chiang Mai base and add more overnight flights from China, which are ideal for utilisation. Putting all six additional aircraft for 2H2014 in Bangkok would be too risky. With Phuket not an option as the Phuket airport is now operating at full capacity, expansion at the Chiang Mai base and the opening of a possible fourth base at Krabi, which could also potentially attract flights from China, are likely.

Thailand will not see in 2014 a repeat of the 69% growth in Chinese arrivals that was recorded in 2013. The market will likely shrink in 1H2014. But TAA is confident the market will recover once political stability returns to Thailand and sees a strategic need to continue expanding in China. In the meantime TAA is trying to promote to its Chinese passengers its domestic connections, particularly to Chiang Mai and the beach resorts of Phuket and Krabi. TAA introduced a Fly-Thru product at Don Mueang in late 2013 which allows passengers seeking to avoid Bangkok to connect without having to collect and re-check their bags.

TAA says it plans to add two to four international destinations in 2014. In addition to southern China, the carrier plans to expand its Southeast Asian network in 2H2014.

The carrier launched services from Bangkok to Siem Reap in Cambodia in 4Q2013 and from Krabi to Singapore. It also added capacity to Yangon but dropped services to another destination in Myanmar, Nay Pyi Taw, after only operating the route for about one month.

TAA is the leading LCC in every international market it serves within Southeast Asia except Singapore. It currently has a 16% share of total seat capacity from Thailand to Singapore, 18% to Vietnam, 23% to Cambodia and 26% to Myanmar, according to CAPA and OAG data. The AirAsia Group currently has about a 50% share of the capacity between Thailand and Malaysia and a 40% share in the Thailand-Indonesia market (TAA has less capacity in these markets than its Malaysian and Indonesian sister carriers but it is the group figure which are meaningful given all the carriers operate under the same brand and use the same website.)

While TAA is keen to continue expanding domestically to keep up with the rapid growth in the overall Thailand domestic LCC market, it is not about to follow its competitors in neglecting the international market. TAA will continue to pursue its current 60/40 domestic/international seat capacity split as it aims to grow passenger traffic in 2014 by 27% for the second consecutive year.

TAA also has an objective of increasing its seat load factor in 2014 by 1pt to 84%. Heavy discounting will likely be required, putting further pressure on average fares, which already dropped by 5% in 2013 including 13% in 4Q2013. But AirAsia has too much at stake in Thailand strategically to slow down.

The AirAsia Group is not adding any aircraft in Indonesia and the Philippines, and has slowed down the intake in Malaysia, but TAA needs to grow as competition intensifies in Thailand despite the challenging market conditions.

It may not be pretty in the short-term, but over the medium to long term AirAsia’s position in Thailand looks set to strengthen, so the outlook for TAA should be relatively bright. 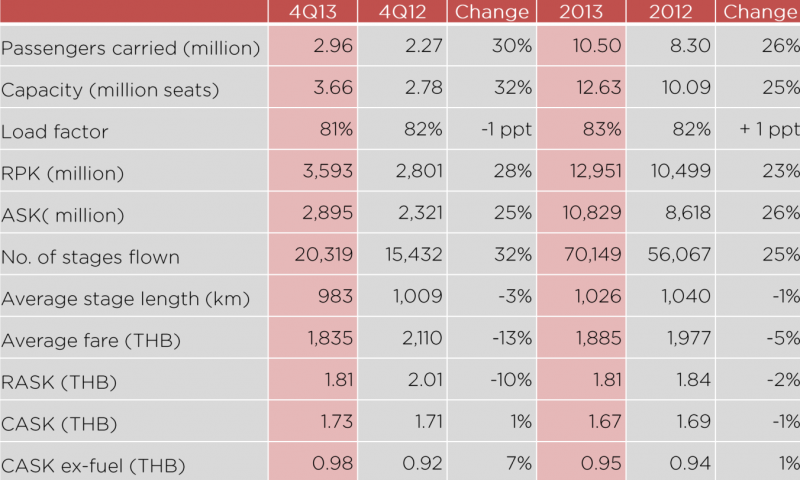