Thai AirAsia aims to complete an initial public offering (IPO) by the end of next month that should raise capital to help fund the next phase of its expansion programme. The Bangkok-based low-cost carrier is an affiliate of the AirAsia Group and expects to expand its fleet of Airbus A320s to 40 aircraft within five years, at which point it may look at adding widebody aircraft.

Thai AirAsia CEO Tassapon Bijleveld told CAPA at last week’s Low Cost Airlines World Asia Pacific conference in Singapore that the company is “about to file” with the Stock Exchange of Thailand its long-planned IPO. He says the filing, which would be submitted “very soon”, will lead to a 45-day quiet period which would culminate in the sale of shares. Mr Tassapon expects the IPO will be completed by the end of 1Q2012, which would require a filing in mid-February.

Mr Tassapon declined to reveal how much Thai AirAsia will seek to raise from the IPO or how big a stake would be sold. But he said the proceeds will be primarily used to fund an acceleration of the carrier’s fleet.

Thai AirAsia currently operates a fleet of 23 A320s and until now has had to rely on the Malaysia-based AirAsia Group to finance its new aircraft. Mr Tassapon says the IPO at Thai AirAsia and subsequent IPOs at other AirAsia affiliate carriers will “help release the burden” on the AirAsia Group and allow all the carriers in the portfolio to pursue faster expansion. Malaysia’s AirAsia now owns 49% of Thai AirAsia while 50% is owned by Thailand’s Asia Aviation, which purchased its stake in 2007 from original local shareholder Shin Corp, controlled by the family of former Prime Minister Thaksin Shinawatra.

AirAsia Group CEO Tony Fernandes confirmed in a 12-Feb-2012 interview with Bloomberg that Thai AirAsia will file this week an application for a stock exchange listing. Mr Fernandes also said Indonesia AirAsia, which has been preparing to file for a listing on the Indonesia Stock Exchange, aims to complete its IPO by the end of 2Q2012. Mr Fernandes added a listing in Malaysia by low-cost long-haul carrier AirAsia X was planned for later this year.

Mr Fernandes has been talking for some time about having separate listings for all existing AirAsia carriers. The main benefit of the separate listings will be to relieve burden on Bursa Malaysia-listed AirAsia as the group rapidly expands its portfolio of carriers. Two more AirAsia affiliates are expected to launch services this year, AirAsia Philippines and AirAsia Japan. Philippines AirAsia finally received its Air Operator’s Certificate (AOC) earlier this month and is now planning to launch services in March or April, five to six months later than initially scheduled due to regulatory delays. AirAsia Japan, which is a joint venture with All Nippon Airways, also received its AOC earlier this month and now plans to launch services in August.

It is likely the new Philippine and Japanese affiliates will also eventually pursue IPOs but in the meantime they will have to rely on the Malaysian company to help fund their expansion. With Thai AirAsia and soon after Indonesia AirAsia having their own listings, Malaysia-based AirAsia will be able to focus on expanding in the Philippines and Japan without having to worry about their older affiliates in Thailand and Indonesia draining capital.

Thai AirAsia has a bright outlook, having significantly improved its financial position in recent years. The carrier reported a profit after tax of THB1.422 billion (USD46 million) on revenues of THB11.565 billion (USD375 million) through the first nine months of 2011, representing increases of 36% and 28% respectively over 2010. 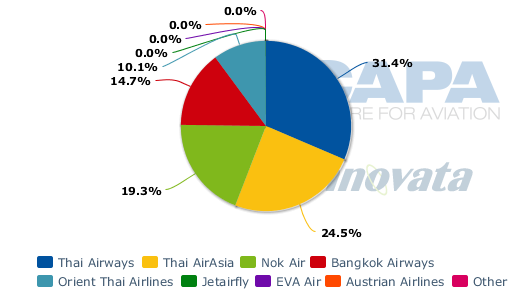 Even more impressive is Thai AirAsia’s growth in Thailand’s regional international market, particularly on routes within Southeast Asia where it currently has about a 15% capacity share. Thai AirAsia currently has a 20% share of capacity from Thailand to Cambodia, 19% to Indonesia, 15% to Vietnam, 14% to Singapore and 12% to Malaysia (sister carrier Indonesia AirAsia has an even larger 27% share in the Thailand-Indonesia market while AirAsia Malaysia has a 39% share of capacity between Thailand and Malaysia).

See related article: Thai Airways to use Thai Smile to fight back at AirAsia and rapid LCC growth in Thailand

Thai AirAsia is confident it will be ble to continue growing its market share in Thailand as it enters the second phase of its expansion programme. Mr Tassapon says the carrier plans to take delivery of two additional A320s this month, giving it a fleet of 25 A320s. He expects the IPO will allow the carrier to add four to five additional A320s per year until it reaches a fleet of 40 aircraft in 2016 or 2017. Widebody and turboprop aircraft could potentially be acquired subsequently in the third phase of Thai AirAsia’s expansion programme but currently are not being considered.

Thai AirAsia to only operate routes of up to 3.5 hours

Mr Tassapon says Thai AirAsia for now will focus on further growing its short-haul international network and will stick entirely to routes of up to three hours, or at the very most three and a half hours. The carrier earlier this month decided to discontinue from late March its daily Bangkok-Delhi flight, which is now its longest route at about 4 hours and 15 minutes. Mr Tassapon’s comments suggest the carrier’s only other flight of over four hours, Bangkok-Hangzhou, could also be cut.

Mr Tassapon says the Delhi flight was typically full, with an average load factor of 78%, but the long length of the route made it difficult from a profit standpoint given the current price of fuel. Mr Tassapon adds “we won’t give up on India” but will stick to shorter routes to eastern and southern India. As a result, the carrier will continue to operate its other current Indian route, Bangkok-Kolkata, which is less than three hours in duration. Mr Tassapon says Thai AirAsia will also launch at the end of next month a daily service to Chennai, disclosing the carrier is now studying two to three other new destinations in southern India. 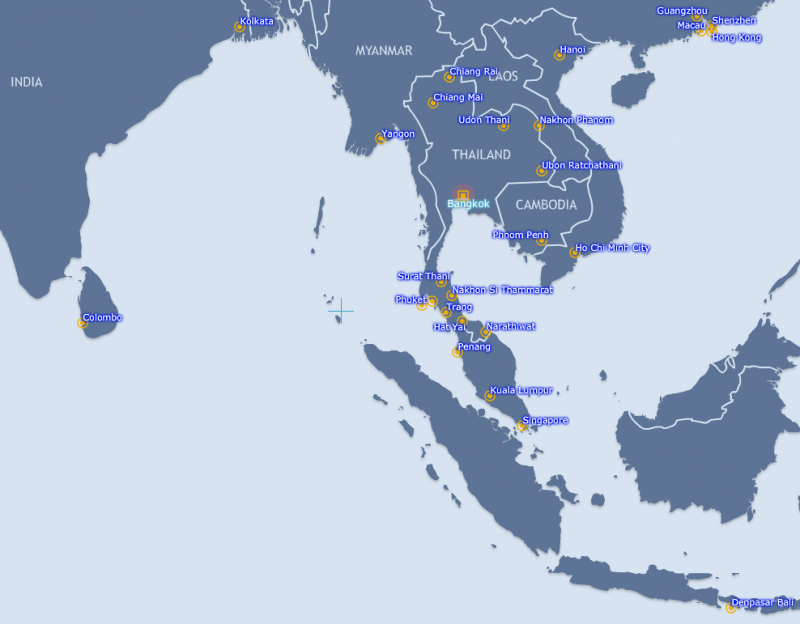 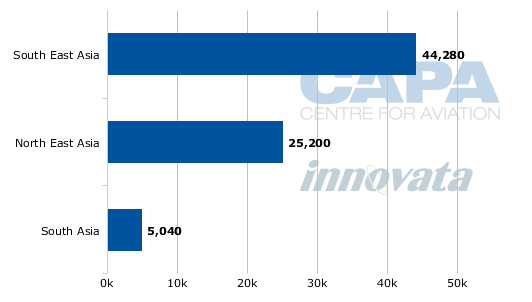 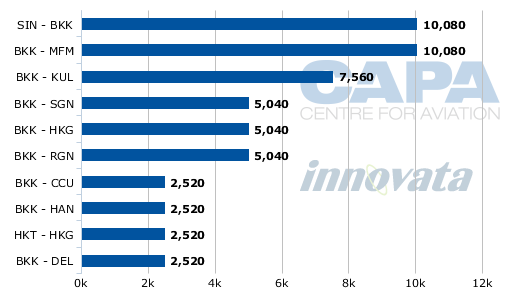 Thai AirAsia’s flights to Malaysia benefit from feed that is provided by long-haul sister carrier AirAsia X. Mr Tassapon says 30% of all AirAsia X passengers connect in Kuala Lumpur onto short-haul AirAsia flights with Phuket being the top destination followed by Bali (the Kuala Lumpur-Phuket route is currently only operated by AirAsia Malaysia).

While Thai AirAsia will lose connecting passengers coming from Europe when AirAsia X drops its London and Paris services at the end of next month, Mr Tassapon says it will pick up at least as many passengers from AirAsia X’s increase in capacity to Australia. AirAsia X is launching daily Kuala Lumpur-Sydney service at the beginning of April. Mr Tassapon points out Australia is one of the biggest sources of tourists for Thailand and Sydney is the largest Australian market. 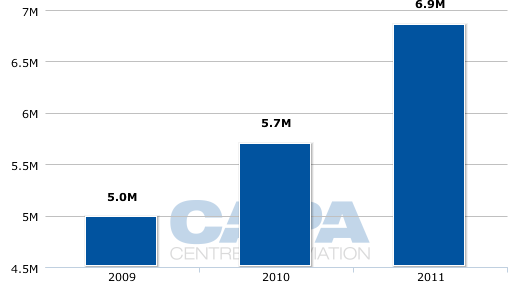 Mr Tassapon says the carrier was not significantly impacted by the Bangkok floods, which struck in late October and led to a big drop in inbound tourists to Thailand in November and most of December. While Thai Airways reported a big drop in some of its short-haul Asian markets, in particular Singapore and Hong Kong, Mr Tassapon claims these routes held up relatively well for Thai AirAsia and the carrier recently added capacity to Singapore.

Globally 2012 is not seen as a great year for airline IPOs. But the general appeal of the AirAsia brand and the continued rapid growth in Asia, particularly in the budget sector, should enable multiple successful IPOs at AirAsia affiliates.

Thai AirAsia has enjoyed relatively rapid success and has quickly established itself as a major player in the fast-growing Thai market. Thai AirAsia has posed a major new challenge to the country’s other publicly listed carrier, Thai Airways, and the anticipated acceleration of its expansion following the IPO could again force the flag carrier to respond. 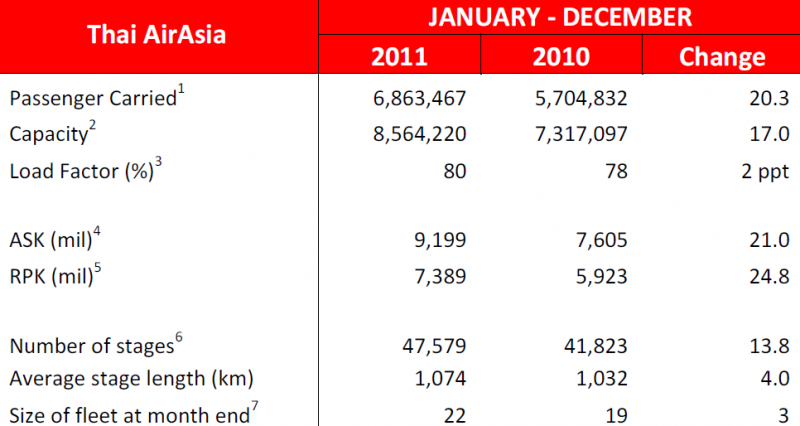 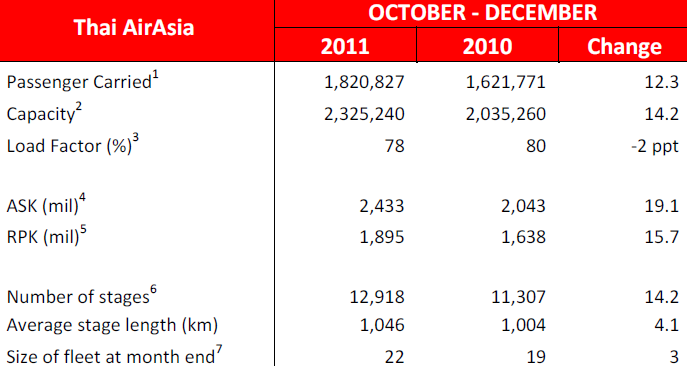