Fresh out of its merger with Genesis Lease, AerCap has reported a USD34.4 million net profit in 1Q2010, from revenue of USD364 million, a surge of 75% from the same period last year.

The revenue jump was triggered by the sale of five aircraft, three engines and parts inventory. These took sales revenue to USD182.4 million in the quarter, compared to USD41.7 million in the same period last year, reflecting an improved market for sales according to CEO, Klaus Heinemann. Basic lease income rose 17% year-on-year, to USD165.8 million. AerCap benefited from higher basic lease rents.

The all-share acquisition of Genesis Lease was completed on 25-Mar-2010, although the transaction had only a USD300,000 impact on the company’s income statement, the result of a one-off gain (net of transaction expenses and tax).

AerCap has USD2.2 billion in committed purchases of aviation assets delivered or scheduled for delivery in 2010, of which USD900 million was closed in 1Q2010. Total assets stood at USD8.7 billion as of 31-Mar-2010, an increase of 50% over total assets of at the same point in 2009.

The acquisition of Genesis Lease accounted for USD1.6 billion of the increase in total assets. The remaining USD1.3 billion increase was driven primarily by deliveries of forward order aircraft. The company expects to increase its portfolio by another USD1.3 billion over the remainder of the year.

With AerCap’s purchase of Genesis Lease and bringing forward its deliveries, the company is now the world’s largest independent leasing company. While still overshadowed by the massive ILFC and GECAS, AerCap has managed to significantly strengthen its position over the past 12 months, and stands to gain considerably as air travel recovers and carriers look to refurbish their fleet with new aircraft to combat the high price of oil. 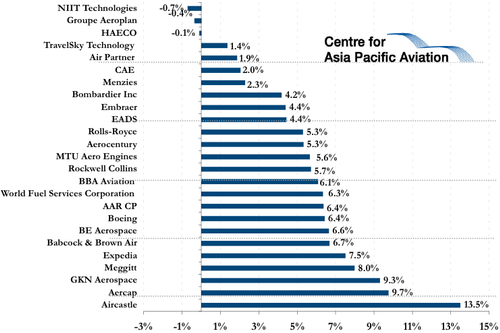