What a difference a year makes. In Feb-2009, the airline industry was reeling. International passenger and freight demand down by 10.1% and 22.1% on the same month in 2008, according to IATA. Feb-2009 marked the “bottom of the cycle” for passenger traffic during the global economic recession, according to the industry body, while cargo hit bottom in Dec-2008. Latest traffic data for Feb-2010 showed international scheduled air traffic rose 9.5% year-on-year (ie still 1.4% below pre-crisis levels), while cargo demand rose 26.5% (and has a further 3% to recover to return to pre-crisis levels). But the really interesting numbers are in short-haul and emerging markets.

IATA’s Director General and CEO, Giovanni Bisignani, stated, “we are moving in the right direction - in two to three months, the industry should be back to pre-recession traffic levels”. But he added, “this is still not a full recovery - the task ahead is to adjust to two years of lost growth”. The highlight for February, according to IATA, was improved load factors which stood at 75.5%. 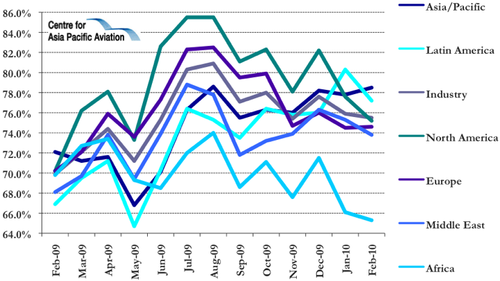 But, big differences in short-haul vs long-haul and emerging vs established markets

1) Short-haul markets are performing more strongly: IATA notes that airlines are maintaining “normal” aircraft utilisation rates on short-haul fleets, but long-haul utilisation is down over 8% compared to 2008 levels. The industry body observed, “the resulting increase in unit costs for long-haul operations may delay the positive impact of stronger demand to the bottom line.

2) Emerging markets are leaving established regions behind: Asia/Middle East/Africa/Latin America traffic is booming while North America and Europe are struggling. 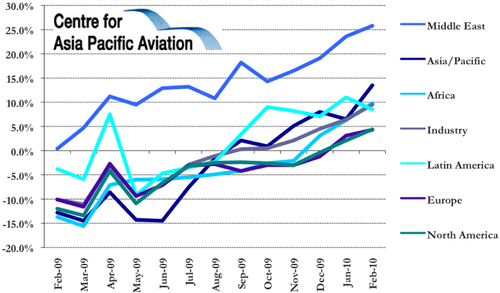 International cargo rebound may “wear out”

The pattern is largely repeated in the freight segment. European airlines have benefited least from the strong upturn in air freight volumes; year-on-year growth of just 7.2% in February, compared to the 26.5% global average.

IATA observed, “despite the sluggish US economy, North American airlines have seen a rebound (+34.1%) equivalent to those experienced by Asia-Pacific (+34.5%) and Latin American airlines (+41.9%). While US GDP expanded at 5.9% during the fourth quarter, consumer spending was up just 1.7%. The bulk of the expansion is attributed to businesses restocking inventories”.

The industry body added, “the global strong air freight upturn has been largely driven by the business inventory cycle. We can expect this part of the cycle to wear-out in the second half of the year when inventories reach normal levels. From that point, we can expect slower growth as air freight will be driven by consumer spending and world trade growth”. 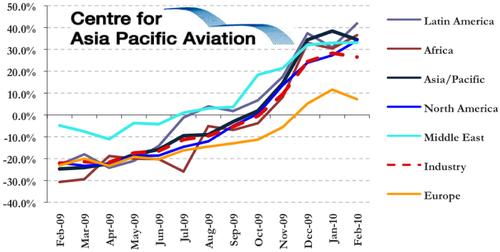 The emerging markets of Asia, the Middle East, Africa and Latin America are seeing very strong recoveries out of the global economic morass of the past two years. European airlines are increasingly turning to African and Asian markets for new growth opportunities, while North American carriers are dusting off their Asia Pacific growth plans.

CAPA expects these trends to continue, as challenging short-haul conditions in the established markets prompt European and North American carriers to search for growth abroad.

The continued opening of aviation markets is critical in this regard. Mr Bisignani repeated his regular call for liberalisation, “which must not fall off the agenda as economies improve”.

Reiterating last week's theme on the US-EU agreement, he added, “to move forward, labour and politicians must come on board by understanding a fundamental reality. Restrictions on ownership do not protect jobs. On the contrary they put jobs at risk. As we are seeing with the two-speed recovery, ownership restrictions limit growth by preventing airlines from growing into efficient global businesses that can take advantage of global opportunities”.

The two-speed, or "asymmetrical" growth pattern is likely to be maintained over the next year, so that airlines based in mature markets will increasingly chase access to the faster growing emerging zones.

If US (and European) reluctance to liberalise is maintained, this is progressively going to reduce the value of the North Atlantic agreement in global terms. For airlines from those regions to maintain their established roles, more open home markets will be essential in the medium term. Protectionism generally backfires - and in the current environment will only tend to marginalise those airlines.