The Northern Mariana Islands is set to receive its first home carrier when Saipan Air launches on 01-Jul-2012, initially serving Japan's Tokyo and Osaka as well as China's Beijing and Shenyang. Backed by Tan Holdings, Saipan's largest private employer, the carrier seeks to gain back the Japanese traffic the islands lost after Japan Airlines withdrew in Oct-2005, taking out 182,000 seats annually. Japanese arrivals, which accounted for 71% of arrivals, immediately declined by 25% and have been shrinking since.

With only Asiana and Delta Air Lines now directly linking Saipan and Japan, Saipan Air could make large inroads, but the three low-cost carriers starting in Japan this year could easily overtake the legacy carriers in Saipan's almost entirely leisure market. Meanwhile China has been a growing market for the Northern Mariana Islands. Not only are LCCs there nascent but the full service carriers are largely focussed on domestic and high-profile international flying.

Saipan Air will be the first time the Northern Mariana Islands (a territory of the US) will have a home carrier, with previous attempts in the form of Air Saipan and Saipan Airways, both from different backers than Saipan Air, never materialising. Saipan has largely been without a home carrier since around 2000 when Continental Micronesia (now part of United) decided to end direct international services to Saipan and instead only offer connecting flights via Guam, 207km away. Saipan Air's services will initially be operated as charters from Swift Air, according to US DoT filings. This virtual operation reduces risk for Saipan Air as well as avoid lengthy US processes to secure an air operator's certificate.

Saipan Air's owner Tan Holdings has significant interests in Saipan ranging from hotels, restaurants and transport to the region's largest newspaper, the Saipan Tribune. Tan Holdings will benefit not only from the flights but the spending done by tourists flying in on Saipan Air, which has adopted for its logo a stylised version of the gecko, which can commonly be found on the islands. Saipan is the largest island – at 19km in length – comprising the Northern Marianas. All services are to/from Asia-Pacific, with the majority of seats serving North Asia. There are no direct flights to the US mainland.

Services will commence on 01-Jul-2012 with a daily service to Tokyo Narita and four weekly flights to Beijing. The flights will be operated by a 194-seat Boeing 757-200 with 16 business class and 177 economy class seats. Swift's 757s will be leased from ILFC, Saipan Air tells CAPA. Delta is the sole operator on the Tokyo-Saipan route with double daily 757-200 service seating 24 in business and 150 in economy. Delta recorded on the route an average load factor of 78% in the year to Nov-2011, the latest US Department of Transportation (DoT) data available.

Saipan Air will expand services on 01-Aug-2012 with daily flights to Osaka operated by a 737-400 seating 150 with 12 in business and 138 in economy, and three weekly flights to Shenyang operated by the 757-200. Asiana is the sole operator between Saipan and Osaka, but the service is seasonal. Asiana also operates to Saipan from Seoul and Busan. Asiana in the year through Nov-2011 reported a 59% load factor between Osaka and Saipan, 59% between Busan and Saipan and 77% between Seoul and Saipan.

Saipan Air is planning robust utilisation of its 757-200, with the daytime Tokyo service complemented by evening and overnight flights to Beijing and Shenyang. The 737-400 is light on utilisation but this can be expected to change as Saipan Air expands. The carrier is considering services to Japan's Nagoya and Fukuoka, seasonal services to Sapporo, as well as Hong Kong and Taipei, Tan Holdings president Jerry Tan told the Saipan Tribune.

All of those cities do not currently have direct links to Saipan but are typically linked via Guam, where Saipan is the underdog to. Saipan also competes with Hawaii and Okinawa. 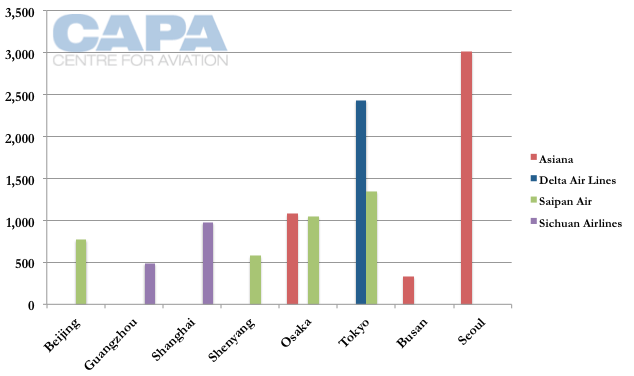 Saipan's visitor arrivals peaked in 1997 with 726,690 tourists. While there was a decline in 1998 following the 1997 Asian financial crisis, Saipan's recent decline in tourists arrivals – to 338,106 in 2011 – occurred after Oct-2005 when Japan Airlines, restructuring its network, entirely pulled out of Saipan, taking 182,000 seats out of the market annually. Not only has Saipan's Japanese visitor arrivals not recovered, nearby Guam, has seen its Japanese visitor arrivals marginally increase compared to a decade ago (Korean visitors to Guam are now growing on a larger basis).

Japanese visitor arrivals to Guam and the Northern Mariana Islands: FY2002 to FY2011 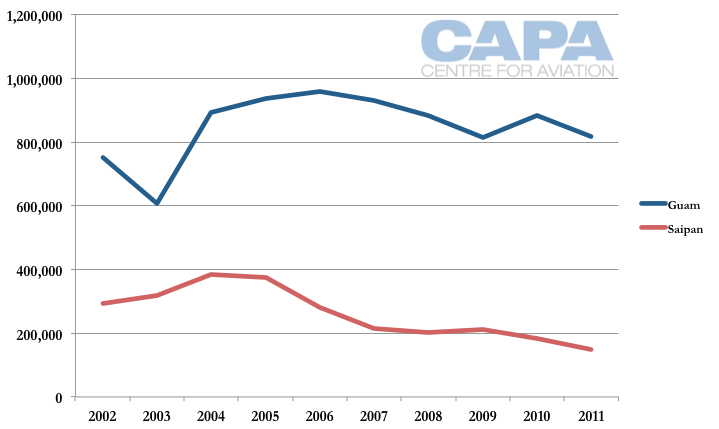 Three LCCs will launch in Japan this year, with Peach having started in Mar-2012, Jetstar Japan to start in Jul-2012 and AirAsia Japan to start in Aug-2012. Initial routes will be domestic with international services initially reaching large cities like Hong Kong and Seoul. But all three are due to serve Japan's leisure region of Okinawa and with Saipan 3.5 hours from Japan – firmly in the operating range of the LCCs' A320s – they may be enticed by the market's high yields even if it lacks the scale LCCs typically to amass. While regulatory permission to serve the US is complex, the Jetstar Group has experience via its Australian arm serving Hawaii. US permission could also be used to serve Guam, a market Korean LCC Jeju Air intends to serve from Oct-2012.

Saipan could sustain additional services: Saipan Air's initial Japanese capacity, assuming an 80% load factor, could boost Japanese arrivals by about 100,000 passengers annually for a total of 250,000. That would be slightly south of the five-year high of 280,000 in 2006. "Our first goal is to bring back the number of Japanese tourists we lost and bring it back to the level before JAL's withdrawal from our travel industry," Mr Tan said. He estimated 50,000 additional tourists would bring USD100 million to Saipan's economy.

However, the 2006 figure is well below the pre-JAL exit high of 385,000 in 2004, let alone the all-time record of 450,000 in 1997. It is also possible the lower fares LCCs will inevitably offer will open Saipan to Japanese who were previously turned away from the market due to high fares.

Airfares comprise a significant component of total trip costs to Japanese tourists, 83% of whom spend only 3-4 nights in Saipan, according to the Marianas Visitors Authority. Saipan Air could be advantaged over the LCCs by being able to assemble package tours – highly popular in Japan – of flights, hotels and other ground services all owned by Tan Holdings. Saipan Air is working with travel agents and tour groups in Japan.

Saipan leads in Chinese arrivals, which have doubled in recent times

If the Japanese market becomes too competitive – or perhaps when, given Jetstar Japan's ambitions to have 100 A320s by the end of the decade – Saipan Air may find new markets more attractive. China in particular is alluring. Its potential base of visitors is growing whereas Japan is a shrinking society. LCCs have yet to be prolific in China, but when they will be, the five-hour journey time to Saipan exceeds the typical LCC narrowbody comfort zone of four hours.

Chinese visitor arrivals to Guam and the Northern Mariana Islands: FY2004 to FY2011 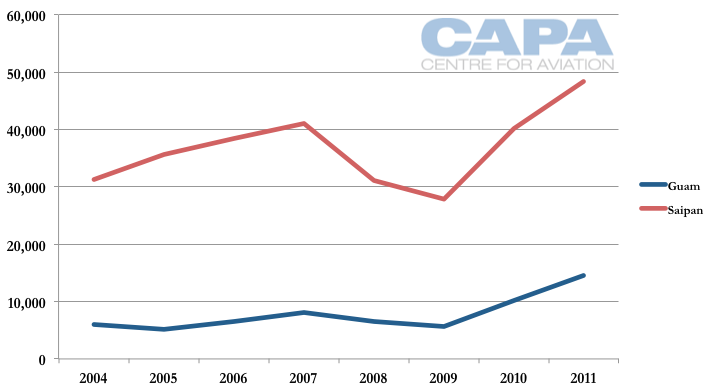 Saipan has a potential further advantage in the Chinese market since the majority of its Chinese arrivals are from the mainland whereas Guam's Chinese visitors are split between the mainland and Hong Kong. Saipan stopped reporting separate traffic figures after FY2006, but in that year Hong Kong visitors numbered 1407 to the mainland's 36,978 (or 96% of all Chinese visitors).

Guam in FY2011 reported 42% of its Chinese visitors, or 6091, were from the mainland while the remaining 8512 were from Hong Kong. This is largely a reflection of capacity: there are no regular services between Saipan and Hong Kong while Sichuan provides regularly scheduled service between Saipan and mainland China. Hong Kong and mainland China direct links are comprised entirely of charters while connecting services are possible on China Airlines and other carriers.

The Chinese have placed high demand on nature-oriented destinations that can promote blue skies and clean air – in sharp contrast to China's typically heavily polluted cities. The Maldives have cashed in on this opportunity, with traffic doubling in 2010 and growing over 50% in 2011. Saipan could see a similar effect, if on a smaller scale. Mr Tan acknowledged the long-term potential of China, saying, "That, actually, is the most important market in the near future". For now Mr Tan and Saipan Air are rightfully focussing on the low-hanging fruit of Japanese traffic while also keeping Chinese services at the forefront with services to Beijing and Shenyang.

The start-up must be quick to gain agility in the event the changing Japanese market spills over to Saipan and Saipan Air finds itself with hotly competitive LCCs. With significant business interests on Saipan, Mr Tan will want to ensure Saipan Air does not become a distraction and that if need be Saipan Air moves on to other markets.

The charter contract between Saipan Air and Swift runs through 30-Jun-2013, according to US DoT filings. Saipan Air will likely want to continue as a virtual airline rather than make significant investments, both financially and in terms of time, and embark on the lengthy process of a US AOC. The charter operation could be wound down if international carriers start growing in Saipan and Tan Holdings chooses instead to concentrate and benefit from serving the influx of passengers.