London Stansted Airport is adding five new airlines to its list of operators this summer: Primera Air, Emirates, Air Corsica, WOW air and Albawings (in order of seat capacity). The list has increased from 14 airlines in Aug-2016 to 22 in Aug-2018, as the airport attempts to reduce its dependency on Ryanair, the facility's dominant airline. After only entering in 2017, Jet2.com is now Stansted's number three operator after Ryanair and easyJet.

Primera Air will add destinations in North America (Boston, New York Newark, Washington Dulles and Toronto) to Stansted's network and Emirates will add Dubai, but the airport remains short/medium haul dominated (181 out of 189 destinations in Aug-2018).

This summer, Stansted's seat growth rate is faster than at any other London airport and it is also adding more seats in absolute numbers than at any other airport. Stansted has had some success in attracting new airlines in recent years, but Ryanair still accounts for 70% of seats at the airport in Aug-2018.

Data from Airport Coordination Limited for the summer 2018 season confirms that Stansted is the fastest growing London airport, both by slots and seats.

On a two-way basis, Stansted is adding almost 2.5 million seats relative to last summer, compared with 1.8 million at Heathrow, 1.6 million at Gatwick, 0.6 million at Luton and 0.3 million at City.

Stansted is achieving this through the addition of 12,700 more air transport movements this summer – more than three times the 4,000 ATMs being added at both Heathrow and Gatwick.

In all cases, seat growth is outpacing slot growth as the average number of seats per movement grows.

For summer 2018 it can be calculated that Stansted's average number of seats per passenger air transport movement is 184, just ahead of Luton's 182, but below Gatwick's 192 and Heathrow's 216. All are well above City's 89 seats per movement.

Stansted's growth in average seats per movement is only 0.7% this summer, slower than all the others. City's average is growing the fastest, by 8.0%, followed by Gatwick at 2.5%, Heathrow at 1.6% and Luton at 1.3%.

Where else are you likely to meet over a dozen airline CEOs at one event?
Join us in Dublin's Powerscourt, 17/18 May, 2018
CAPA's Airline Leaders Summit

Stansted may be ahead of the others when ranked by capacity growth this summer, but it remains firmly in third place behind Heathrow and Gatwick by total numbers of seats and slots, while it is significantly larger than Luton and City.

Stansted's annual passenger numbers fell between 2007 and 2012, but have since returned to growth

Stansted's traffic suffered during the global financial crisis, with passenger numbers falling from 23.8 million in 2007 to 17.5 million in 2012.

This not only reflected the crisis, but also (perhaps more so) the reduction in capacity at the airport by its leading airline, Ryanair, due to increased airport charges. Stansted's change of ownership and a new deal for Ryanair have led to a return to traffic growth.

Stansted only surpassed its 2007 passenger total in 2016. 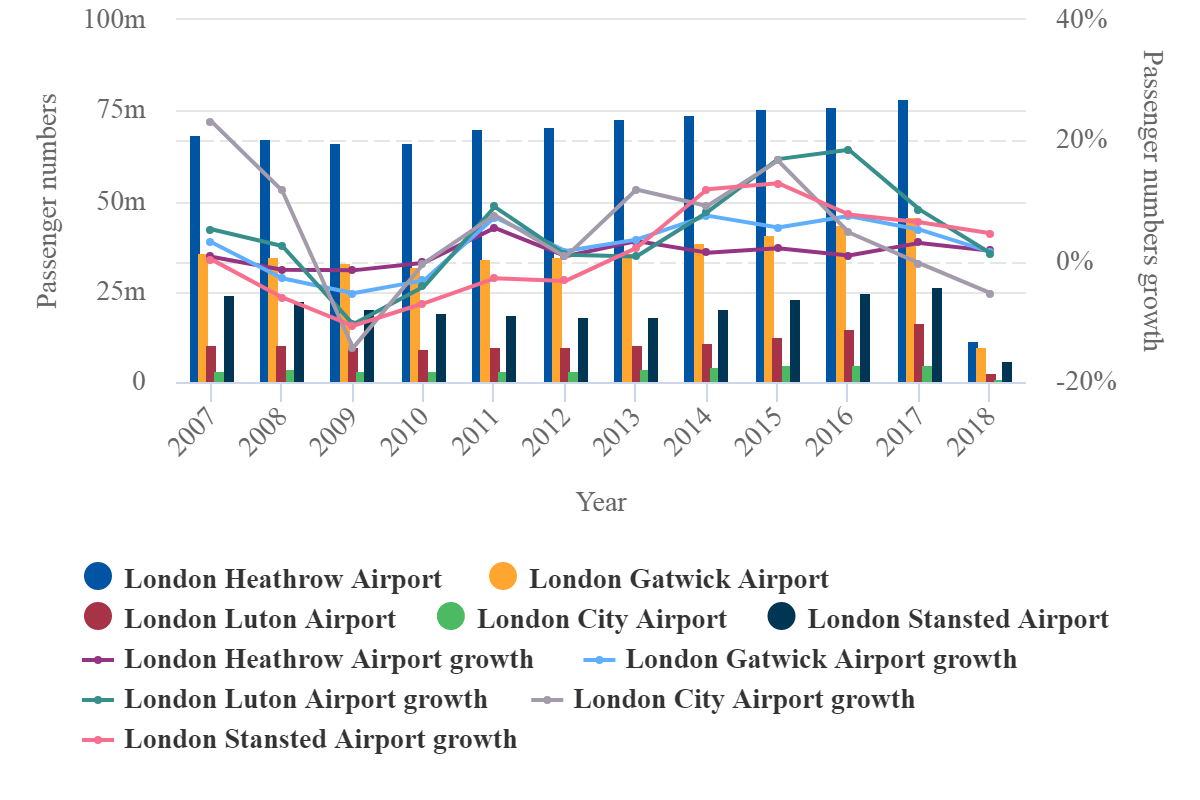 Stansted's summer 2018 schedule includes 28 newly offered services, of which 14 are new routes for the airport.

Both Primera Air and Jet2.com are adding eight routes to their networks from Stansted. For Primera Air, a new entrant to Stansted, there are four new long haul routes, to Boston, New York Newark, Washington Dulles and Toronto, which are also new to the airport.

In addition to Primera Air's four new long haul routes, also new to Stansted this summer are Emirates' service to Dubai, Nordwind's service to Moscow Zhukovsky; Widerøe to Kristiansand, Air Corsica to Ajaccio and Figari, Air Corsica and easyJet to Bastia, Montenegro Airlines to Tivat, Albawings to Tirana and Ryanair to Rimini.

Other newly operated services that are not new routes to the airport (because another airline already operates to the destination) also include WOW air to Reykjavik (easyJet operates in the winter), Air Mediterranean to Athens (in competition with Ryanair) and Ryanair to Belfast International (competing with easyJet).

Ryanair has cancelled services to Lorient Bretagne Sud and Rijeka this summer.

Jet2.com is Stansted's number three airline, after only entering in 2017

Jet2.com is adding eight destinations to its Stansted operation (Nice, Naples, Malta, Bodrum, Almeria, Thessaloniki, Kefalonia, Verona), bringing its total number of routes from the airport to 33 this summer.

Jet2.com only entered Stansted in the summer of 2017 and is already the airport's number three airline by seat numbers.

Its seat numbers in that week will be equivalent to almost half of the total additional seats at Stansted relative to the same week of 2016. 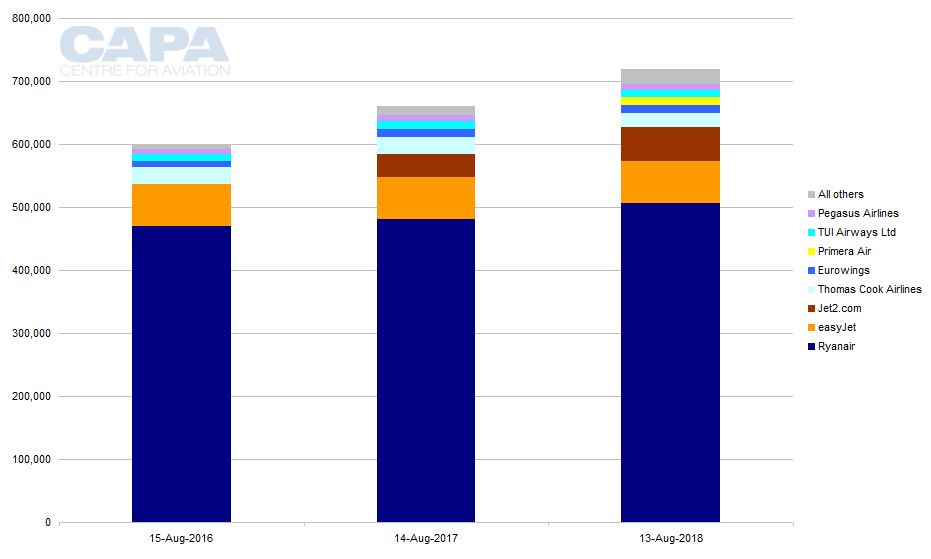 In the week of 13-Aug-2018, Stansted will be the airline's number three airport, with 13.2% of its departing seats, behind only its long-established bases at Manchester (24.2% of its seats) and Leeds Bradford (16.5%). For an airline traditionally focused on the north of the UK, this represents a significant transformation. 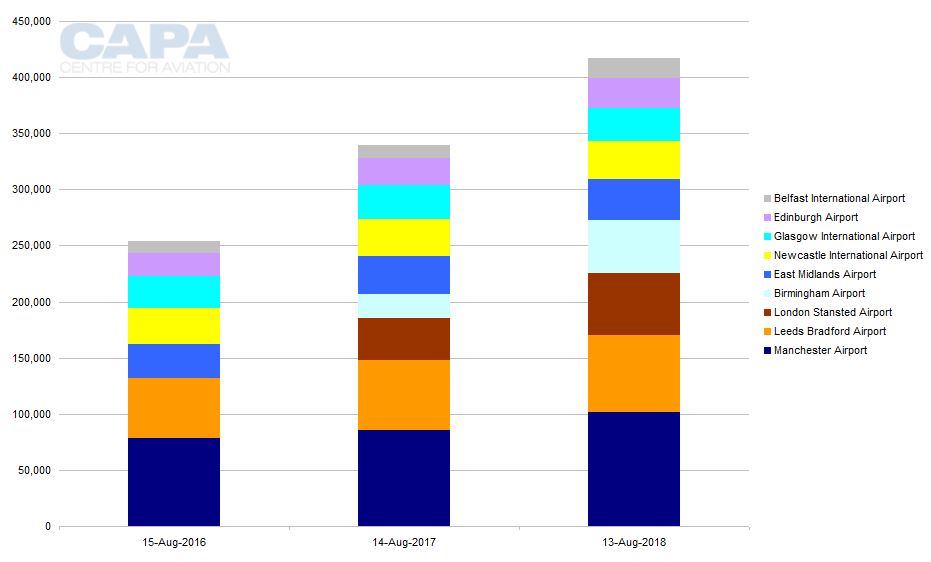 For Stansted, attracting new airlines is vital in reducing its dependence on Ryanair

Jet2.com has been a major addition to Stansted's airline roster and the airport is now building on this.

Primera Air's entry this summer will take it straight to number six at the airport (based on the week of 13-Aug-2018). Primera Air is adding long haul destinations in North America, in addition to short haul/medium haul destinations that could also provide some feed.

Wow air's entry makes Reykjavik a year-round destination and adds destinations in North America via a stopover in Iceland.

Recent airline gains by Stansted have not been limited to low cost operators. British Airways started to fly from Stansted in May-2016, and the addition of Emirates in Jun-2018 adds another globally recognised name.

For Stansted, the ability to attract and grow new airline customers is vital in reducing its dependence on Ryanair.