SriLankan Airlines is resuming long haul expansion on 29-Oct-2017, with the launch of a daily service to Melbourne in Australia. Colombo-Melbourne will become SriLankan’s second long haul route (over nine hours) after Colombo-London Heathrow – the airline’s only surviving European route following a major restructuring in 2016.

The airline dropped Frankfurt and Paris in 4Q2016 and cancelled an order for A350s which were initially intended for European expansion. Melbourne is an exception in a new short haul focused network strategy, and will not be followed by any other new long haul destinations.

Over the past year SriLankan has been focusing on growing regional routes within Asia as part of a new strategy aimed at improving profitability and making the airline attractive to potential investors. SriLankan has been highly unprofitable for nearly a decade, accumulating losses of more than USD1 billion since its last profit in the fiscal year ending Mar-2008.

SriLankan repositioned as a regional airline

SriLankan CEO Suren Ratwatte told CAPA TV on the sidelines of the 1-Aug-2017 CAPA Australia Pacific Aviation Summit that the airline is “very much focused on being a regional carrier. Other than London, China, Japan and Australia we don’t intend to spread our wings out much further than that.”

SriLankan intends to focus expansion mainly on regional routes within Asia. The airline currently has 22 short haul international routes (less than four hours), those being 19 within South Asia and three to Southeast Asia.

SriLankan now has four destinations that are served with two daily frequencies – Bangalore, Kochi, Tiruchirappalli and Kuala Lumpur. All of these could potentially support a third frequency.

Captain Ratwatte said some of SriLankan’s smaller regional routes may also be upgraded to two daily flights. SriLankan currently has 11 weekly flights to Delhi, and seven weekly flights to five short haul destinations – Dhaka, Karachi, Madurai, Mumbai and Trivandrum. SriLankan recently announced the introduction of a second daily flight on the Colombo-Mumbai route from 29-Oct-2017 and an increase to 13 weekly flights on Colombo-Delhi from 1-Dec-2017.

SriLankan’s other eight short haul international destinations are served less than daily. Some of these could potentially be upgraded to daily as the airline aims to add frequencies across its regional international network.

The airline's aspirations to grow overall traffic are driven partially by anticipated growth in sixth freedom traffic. SriLankan’s biggest strength is its network in India and other South Asian countries, which it aims to leverage as it grows in other markets such as Australia.

While Frankfurt and Paris have been cut over the past year as the long haul network was restructured, SriLankan has expanded its short haul network by adding four destinations, resulting in a net increase of its international network by two destinations (from 38 to 40). All four destinations that were launched were in South Asia, being three in India (Coimbatore, Hyderabad and Visakhapatnam) and one in the Maldives (Gan).

SriLankan expands in India by nearly 50% 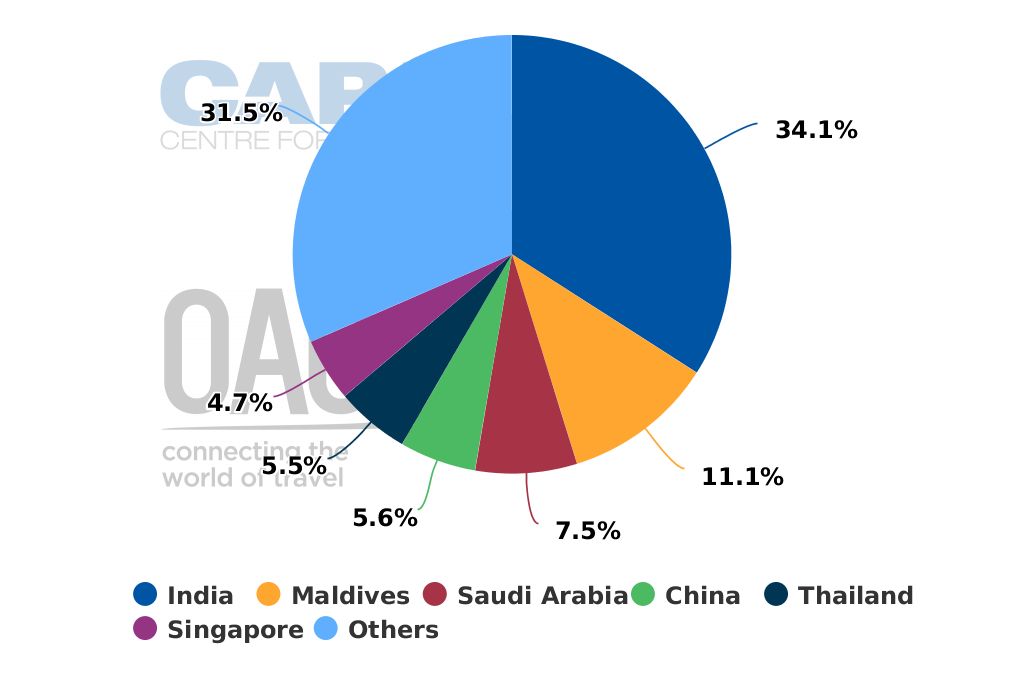 SriLankan fleet size has been flat over the past year

SriLankan operates a mix of narrowbody and widebody aircraft on eight of its 22 short haul routes (Bangalore, Bangkok, Chennai, Karachi, Kochi, Kuala Lumpur, Male and Trivandrum), whereas the other 14 routes are served entirely with narrowbody aircraft.

The airline’s fleet currently consists entirely of aircraft in the A320 and A330 families, but multiple variants enable it to change gauge to meet demand, depending on day of the week and the season.

Taken as the group, SriLankan’s fleet has been maintained at 13 widebody aircraft and 12 narrowbody aircraft over the past year. However, SriLankan has been able to grow in India and other markets by reallocating widebody capacity that was previously used for Frankfurt and Paris.

The parent airline’s fleet has expanded from 21 to 25 aircraft over the past year as the narrowbody fleet grew from eight to 12 aircraft, driven mainly by the introduction of A320neo/A321neo aircraft.

However, this was offset by a reduction of four aircraft as Mihin Lanka suspended operations. (The A320neos and A321neos offer improved range and efficiency over the A320ceos and A321ceos, but SriLankan has not increased seat density with the neos.)

Mihin Lanka operated four aircraft – a mix of 737 and A320 family aircraft. SriLankan took over all Mihin Lanka routes and some of Mihin Lanka’s aircraft on 30-Oct-2016.

Mihin Lanka operated 12 routes, those being two overlapping routes with SriLankan and 10 exclusive routes that are served under the parent full service brand. Mihin Lanka served two of these routes seasonally: Colombo to Gaya and Varanasi in India. SriLankan also now serves these markets on a seasonal basis.

As previously mentioned, the net increase of two destinations over the past year was driven by four new routes to South Asia, offset by the two suspended routes to Europe.

Note: some of the destinations were served by LCC subsidiary Mihin Lanka until 30-Oct-2016.
Source: CAPA – Centre for Aviation & OAG.

Along with the 22 short haul international routes listed earlier in this report, SriLankan currently has 17 medium haul routes (four to nine hours) and the one long haul route (over nine hours). The 17 medium haul routes consist of nine routes to the Middle East, one to Africa (the island of Seychelles in the Indian Ocean), six to North Asia and one to Southeast Asia (Jakarta). Colombo-Jakarta is a five-hour flight while SriLankan’s other three Southeast Asian routes (Colombo to Bangkok, Kuala Lumpur and Singapore) are all less than four hours, putting it in the short haul category.

India is again the biggest focus over the next year

SriLankan has added capacity to the Middle East, North Asia and Southeast Asia over the past year. However, the capacity increase to India has been the most pronounced, and SriLankan is now considering a cut to its capacity on some of its Middle East routes, due to overcapacity in the Sri Lanka-Middle East market.

Some Middle East capacity could be redeployed to short haul regional routes. SriLankan also has an opportunity to expand regional international capacity over the next six months as it takes delivery of the remaining three A321neos it has on order. Two of these aircraft are slated to be delivered by the end of 2017, and the third aircraft is expected to be delivered in Mar-2018.

India is the main focus under SriLankan’s new strategy, and will continue to be a focal point as the airline looks to add capacity on existing regional routes. India is also a focus for planned growth in other international markets as SriLankan selects markets where there is strong sixth freedom traffic to/from India.

India drives Melbourne launch, but connections are far from ideal

For example, SriLankan’s decision to launch services to Melbourne was driven by opportunities in the Australia-India market. In the 1-Aug-2017 interview with CAPA TV, Capt.Ratwatte pointed out: “We have an unrivaled route network in India that allows any traffic going to the subcontinent to have seamless connectivity out of Melbourne to almost anywhere in the subcontinent, which I think is a huge marketing advantage”.

However, analysis of schedule data indicates that from Melbourne quick connections will be available to only four of SriLankan’s 14 destinations in India.

SriLankan’s Melbourne-Colombo flight will depart Melbourne at 16:55 and land in Colombo at 22:15. Most of SriLankan’s flights to India depart in the morning, resulting in overnight layovers of nine to 11 hours. The only exceptions are Bangalore, Chennai and Delhi, and Mumbai, which have departures after midnight, resulting in layovers of two to three hours.

On the return sector, flights from Bangalore, Chennai, Delhi and Mumbai land in Colombo one to two hours before the 23:50 departure from Colombo to Melbourne. (For Mumbai, the second daily frequency being added on 29-Oct-2017 lands in Colombo at 22:50. The decision to add this flight was likely driven by a need to improve Mumbai-Melbourne connections.)

On most of SriLankan’s other Indian routes there is a layover in Colombo of six to seven hours on the return sector.

Connectivity from Melbourne to other destinations is also lacking

Male, in the Maldives, and a one-stop destination that SriLankan is promoting for outbound Australian leisure travellers, has a one hour connection on the return leg. However, the quickest connection from Melbourne to Male requires an overnight nine-hour layover in Colombo.

SriLankan’s other non-Indian South Asian destinations (Gan in the Maldives, Dhaka in Bangladesh and Karachi and Lahore in Pakistan) require layovers of several hours in both directions. SriLankan’s Melbourne flight also does not connect in either direction with London, its only remaining European destination, nor with its Middle East flights. London and the Middle East flights depart Colombo in the afternoon or early evening – a few hours before the flight from Melbourne will arrive.

SriLankan will be able to benefit from growing traffic in the local Australia-Sri Lanka market, where it will be the only airline offering a nonstop service. Melbourne-Colombo is by far the largest Australia-Sri Lanka city pair by travellers, since Melbourne has a big Sri Lankan community, providing an opportunity to carry ethnic and visiting friends and relatives (VFR) traffic.

However, Australia-Sri Lanka is a relatively small market. In 2016 there were 73,000 Australian visitor numbers to Sri Lanka and approximately 30,000 Sri Lankan visitors to Australia.

SriLankan will need to improve connectivity if Melbourne is to succeed

The local Melbourne-Colombo market is obviously not big enough to fill up the nearly 100,000 annual one-way seats (including more than 6,000 lie flat business class seats) that SriLankan will generate with the new daily flight.

However, the issue of long layover times on most Melbourne-India city pairs puts SriLankan at a competitive disadvantage compared to other airlines offering one-stop products in the Melbourne-India market, which include AirAsia, Malaysia Airlines, Thai Airways and Singapore Airlines (SIA). Air India also operates three weekly nonstop flights from Melbourne to Delhi. Only in the Melbourne-Bangalore and Melbourne-Chennai markets is SriLankan offering a similar transit time to those of the existing competitors.

AirAsia and SIA will also continue to offer the quickest times from Melbourne to the Maldives. SriLankan should still be able to attract some Melbourne-Maldives and Melbourne-India traffic with low fares and stopover packages, but the current schedule could prove challenging for sustaining a daily service.

SriLankan will have to overcome challenges as it adds capacity

As SriLankan expands its regional operation, additional frequencies on South Asian routes will likely be timed to connect with Melbourne and other destinations that have strong India or South Asia traffic.

However, any capacity expansion SriLankan pursues is risky, as it pressures yields that are already low. SriLankan faces intensifying competition at home and on most of its sixth freedom markets.

SriLankan cut its cost base in 2016 and is continuing to work towards further cost reductions. Captain Ratwatte told CAPA TV the airline is looking to embark on new restructuring initiatives “in many areas”, including engineering.

SriLankan remains highly unprofitable and still faces numerous challenges. Not surprisingly, multiple efforts over the past year to secure a new investor from the private sector have failed.

Profitability will be difficult to achieve

SriLankan has been one of the most unprofitable airlines since 2008, when Emirates' contract for managing SriLankan ended. Emirates also had a 44% stake in SriLankan until 2010.

Over the past nine fiscal years SriLankan has accumulated losses of more than USD1 billion, while generating revenues of slightly more than USD7 billion. This equates to a dismal average margin of approximately negative 15%.

Losses narrowed in the fiscal year ending Mar-2016, aided by lower fuel prices and strategic adjustments implemented after Sri Lanka’s new government took over in early 2015. However, losses have again been widening over the past year.

The launch of Melbourne will make it even more difficult for SriLankan to turn the corner any time soon, since it will take time for the route to mature, particularly given the initial lack of connectivity with the rest of the network. The new regionally focused strategy is sensible, but Melbourne is an unnecessary and risky distraction. The overall outlook for SriLankan remains relatively bleak.