In Aug-2010, Spirit raised industry interest and Congressional hackles by announcing it was imposing a carry-on bag fee as part of an effort to speed boarding and deplaning. It remains the only airline to have such a fee and it is setting a new standard for fees in the US airline industry.

The airline, which generates about 30% of revenues from ancillaries, not only made the fee stick but earned USD50 million from the effort. In a hearing last spring, Louisiana Senator Mary Landrieu was so furious that she would not let CEO Ben Baldanza get a word in edgewise to counter her charges that his airline was a consumer rip off. Given the 25% increase in passengers after the fee was imposed, apparently passengers do not agree.

Nor did she address the fact that in imposing the new fee, Spirit dropped its base fares an equal amount to compensate. Since no other airline has done likewise, an argument could indeed be made that Spirit is consumer friendly especially for those whose carry-on fits under the seat, as they are not charged a fee.

Just one in five passengers pay the fee, which has been instrumental in raising ancillaries per passenger by 23% this year to USD43.04, the airline said in a recent presentation. Nor have passengers booked away from the maverick carrier.

Meanwhile, the company’s average, per-passenger ticket revenue fell to USD77.39, down USD27 between 2006 and 2010 while revenue per passenger in the same period rose USD30 to USD35, for a net gain of USD3 per passenger.

Clearly passengers have responded positively to the out-of-the-box move, especially given the per passenger take is now at USD43.04. 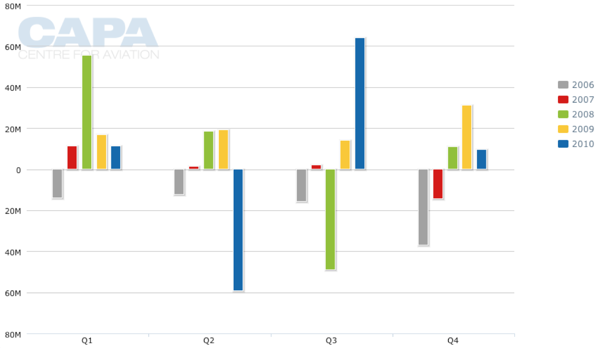 The carry-on bag fee may be the last fee-based product to be rolled out in the industry for items that were previously included in the cost of a ticket and it shows the impact of such fees on an airline’s bottom line.

Analysts constantly ask airline management what more they can do in raising fees, fearful that the goose that laid the golden egg may be dying. They are correct in being worried.

While there may be other such fees lurking in the minds of revenue managers, it is doubtful that they may see the light of day. After rising steadily since 2006, some fees, including change fees, are declining. Fees were borne of airline needs to hedge rising costs, but now may be a dead-end game. Airlines are now developing products that meet consumer needs and the potential for these is astronomical.

Airlines are more reliant than ever on ancillaries because the only way they have achieved profitability is by shrinking and that is not a game plan but rather is still playing defensive.

And now their new golden egg is under threat by Congress people who think they are doing something good for the consumer.

The Government is often blamed for the lackluster performance of the international airline industry. Witness the different impact of how Middle Eastern governments foster aviation while Western governments in Europe and the US use the industry as giant ATM machines sucking 20% of every ticket to build a non-existent, and likely never to appear, air traffic control system.

The Department of Transportation (DoT) has already turned the industry upside down in requiring airlines only advertise the bottom-line cost of tickets including all government taxes and fees created a total price per ticket in a reversal of policy that goes back to deregulation.

The DoT is already working on a Notice of Proposed Rule Making to increase ancillary reporting as a prelude to new laws expected from Congress that would tax such fees. Those legal changes will have to include changes to the tax code – something both parties have targeted for 2012 but more likely in 2013 since 2012 is an election year. It is hard enough for Congress to take action in a non-election year.

Still, the move against fees, piloted by Senator Landrieu would forestall everything the airlines hope to accomplish with fees and reverse the trend that had the industry making USD1.9 billion in profits in the second quarter, USD1.4 billion of which was generated by fees. Her move would deprive airlines of the millions in critically needed checked bag and other fees made in 2010.

Travellers complain their peers carry too much carry-on luggage as a result of the checked-bag fees, which slows the boarding and deplaning process and bogs down security. But charging for it, as evidenced by Spirit’s carry-on bag fee, does not dampen the demand for the ability to carry on baggage, so it is unlikely there will be changes in such behaviour were things to change.

Senator Landrieu says the ability to check a bag is a right but she forgets that such thinking went out with deregulation 30 years ago. She wants every passenger to be guaranteed the right to one checked bag. Her co-sponsor, Senator Benjamin Cardin from Maryland, not only wants the one-bag guarantee but also wants to ban carry-on bag fees for normal-sized bags. The Government also argues that the bag fee has increased security costs by 20%.

The solution for that is slimming down the Department of Homeland Security (DHS). All agree it is a bloated agency in need of reform and DHS and its Transportation Security Administration (TSA) could well take a lesson from the airlines in trimming costs and increasing efficiency and productivity. Indeed, the industry has long favoured trimming DoT and Federal Aviation Administration (FAA) bloat before raising passenger taxes and fees which is now before the Congress in the guise of the ill-fated, much delayed FAA reauthorisation process. Worse, that reauthorisation includes a new tax, the 18th in the panorama of government taxes and fees, that is destined to go to deficit reduction, not air traffic management improvement.

For its part, the industry counters that the Government should be more worried about streamlining a hassle-packed airport process that drove 41 million passengers from the air in 2008, costing the economy USD29 billion. Airlines argue that they offer a choice of paying only for what passengers value, adding that only about a quarter of passengers pay a checked-bag fee.

One would also think that the government-imposed regulation against more than two carry-on bags has solved that problem.

Senator Landrieu and company, including the DoT, want to ignore that airlines are late comers to the fee game. After all, the Government started imposing taxes and fees in the 1960s. If the Government was serious about consumer protection, it would tackle all fees, including those charged by banks, hotels and car rental agencies. One traveller was recently charged USD5 to print out a boarding pass at a hotel in Las Vegas.

Instead it fiddles with consumer regulations that do nothing but hurt consumers. Witness the tarmac rule that increased cancellations exponentially. Now, the DoT has the rule making about advertising the full price of a ticket in a bid to reduce their culpability in rising air fares. It is about to take effect next month, a deadline that is impossible to meet given the IT issues that remain unresolved in the new rule. The DoT wants to require airlines to increase reporting on fees. This DoT has put out more consumer regulations in the past four years than in previous administrations all in the name of a populist agenda that only costs more jobs.

Airlines are only now emerging into a new era, one in which they are determined to become and remain profitable with 10% margins over the course of the entire business cycle. They have moved heaven and earth to restructure both in and out of bankruptcy at the cost of hundreds of thousands of jobs over the last decade. When one considers that each airline job drives 12-15 non-airline jobs, this is an excruciating impact on the economy.

Airline fees are the only way for airlines to remain profitable in the face of rising fuel costs which eat up every cent of cost savings they have managed since the 2008 meltdown.

In the face of new competition from non-taxed airlines from the Middle East who take advantage of Exim Bank financing which gives them further cost advantages, this is not the time for the Government to be imposing more costs on airlines through spurious economic regulations that should have gone out with deregulation.

Deregulation was never meant to guarantee airline success but only to guarantee the democratisation of the airline passenger and it has been wildly successful at its stated goal but it has come at a high cost. Fares have lagged to the point that passengers are paying 40% less to fly today than they did in 1978 despite the fare hikes that have been put in place over the last 12 to 24 months.

The bill makes for good populist headlines as we head into an election year but it is bad for business and is a perfect example of what the Obama Administration says it wants to get rid of – unnecessary regulations that hamper business success.