US ultra-low-cost carrier Spirit Airlines is continuing its drive into domestic legacy airline hubs, pursuing a strategy to capture the low-hanging traffic fruit the larger carriers have chosen to abandon as they attempt to pursue sustained profitability. During late 2012 and continuing into 2013 Spirit is making incremental moves in United’s Houston Intercontinental hub and American’s Dallas/Fort Worth hub, which has quickly risen to become one of the carrier’s key markets during a short two-year period.

At the same time Spirit appears to be quietly testing out the waters against Alaska Airlines. During 4Q2012 Spirit is challenging Alaska’s dominance in the San Diego-Portland market, and is attempting to inch its way into another Alaska monopoly route – San Diego-Los Cabos. During the last couple of years Spirit has been forging a new strategy of entering legacy markets with low frequency service and its bare-bones low fares to essentially stimulate just enough traffic to support its service levels.

Spirit concludes the customers it attracts are too low-yielding for the legacy carriers to pursue, which means Spirit for the most part seems to peacefully co-exist with those airlines at their major hubs. It is a pronounced shift for the carrier which for many years placed its attention on building a strong network from its Fort Lauderdale base into the Caribbean and Latin America, seizing on both the strong leisure and visiting friends and relatives (VFR) traffic patterns in those regions.

Now Spirit has quickly fleshed out its domestic presence, building out markets in the US midwest and west coast. In addition to Dallas, Spirit has either launched service or is planning new flights at Chicago O’Hare, Denver, Las Vegas, Portland, San Diego, Phoenix-Mesa, Oakland and Minneapolis.

Spirit’s strategy differs somewhat from fellow ultra-low-cost carriers Allegiant and Frontier Airlines, as it aspires to whittle its cost levels down to rival those two carriers. Allegiant and Frontier during the last year have opted to take advantage of opportunities ushered in by consolidation of US carriers for most of the last decade, including the recent joining of Southwest and AirTran, to fill in service gaps created through the various combinations of carriers in the US domestic market place.

With a few exceptions Spirit has ignored some of the route abandonments triggered by consolidation and instead opted to foster traffic stimulation in some of the busier domestic markets. It has opted to launch flights from smaller airports including Phoenix-Mesa and Latrobe, Pennsylvania, but mostly the carrier has entered into large metropolitan markets offering rock-bottom fares and charging fees for nearly every other aspect of air travel.

Spirit will forge direct competition with Frontier when it launches flights from Phoenix-Mesa (located 42km from the region’s main airport Phoenix Sky Harbor) on 04-Oct-2012. Spirit’s Denver to Phoenix-Mesa service is debuting ahead of Frontier’s new flights, which are scheduled to begin in Nov-2012. Once it launches the service, Frontier will serve both Phoenix area airports from its Denver hub.

Schedules just published in the GDS show that Spirit is ending its Chicago-Detroit service in Oct-2012. The market is currently served by three other carriers - Delta, United and American.

Spirit management recently told the Houston Chronicle the carrier has examined serving Houston Intercontinental for five years, noting the passengers that gravitate to Spirit could not fly at all or not very often due to higher fares charged by other carriers. The airline has used that same logic in Dallas, reasoning it can enter the market and offer drastically lower fares at Dallas/Fort Worth, where American now accounts for about 83% of the available seating capacity. 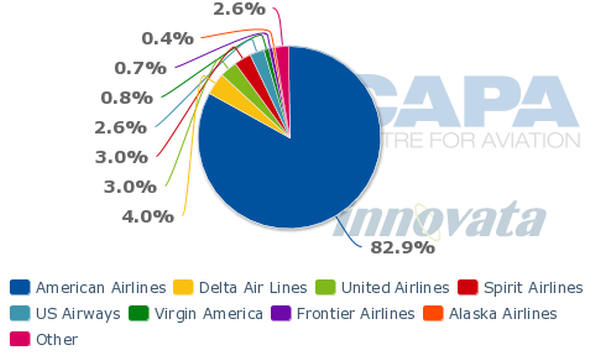 United has an even greater dominant position in Houston, where it commands 85% of the available seat share. It is not surprising Spirit would target two hubs where legacy carriers have an overwhelming control of the market.

But Spirit’s single daily flights from those cities do not produce enough capacity to warrant concern by legacy carriers of a flood of oversupply in those markets. Spirit’s single daily flight between Houston and Chicago will pale to the roughly 12,900 one-way seats currently on offer from American and United in the market, with United accounting for 87% of the total seats between its two hubs. The same scenario applies to Spirit’s Houston-Las Vegas flights, where United currently offers approximately 7,400 one-way weekly seats. 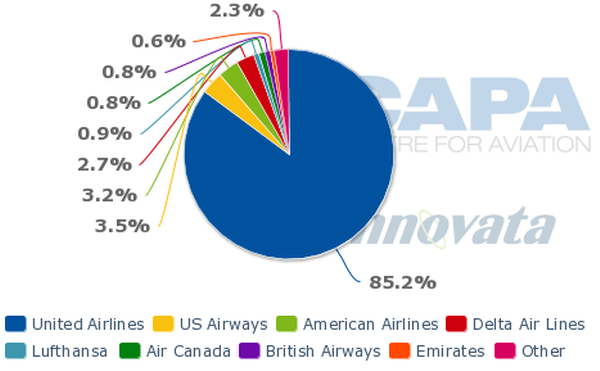 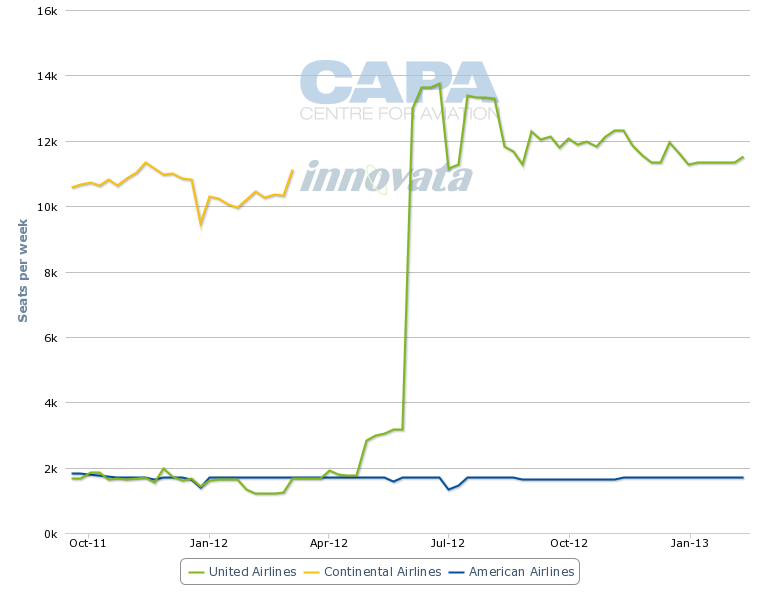 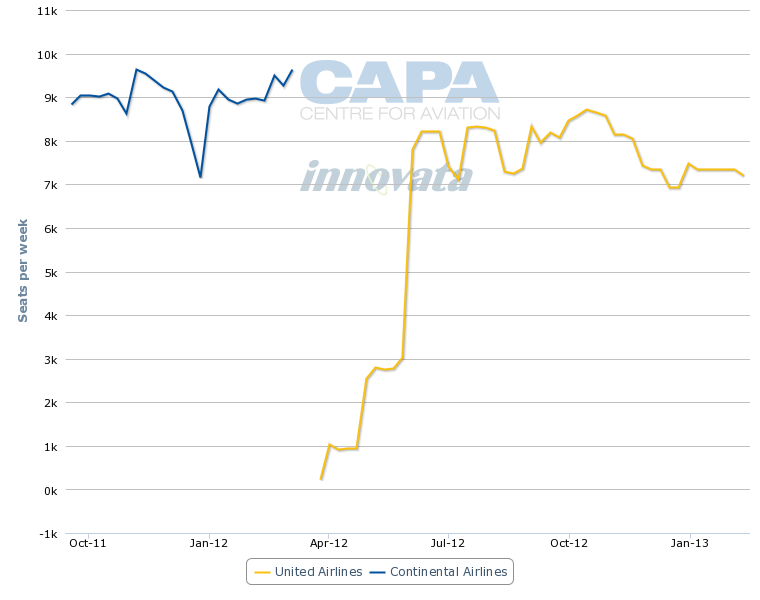 Spirit faces an interesting operating environment in Houston as Southwest Airlines offers roughly 5,600 one-way weekly seats from Houston Hobby to Chicago Midway and 3,500 to Las Vegas. But Spirit and Southwest have so far cohabited in the Chicago market, where Southwest serves Chicago Midway, which is the airline’s top airport in terms of departures. Southwest and Spirit overlap in at least 10 markets from the Chicago area (Boston, Minneapolis, Fort Lauderdale, New York LaGuardia, Detroit, Orlando, Denver, Las Vegas, and Los Angeles).

Spirit’s build-up in Dallas/Fort Worth continues unabated. Beginning in Nov-2012 six additional markets are scheduled to come online, which will bring the total destinations served by the carrier from the airport to well over 20.

All of those markets are well served. American and Southwest offer service to New Orleans from Dallas (Southwest from Dallas Love Field). Delta operates from Dallas/Forth Worth to Minneapolis hub alongside American and Sun Country Airlines, according to schedules in Innovata. US Airways offers service from its Philadelphia hub to Dallas in addition to American Airlines. 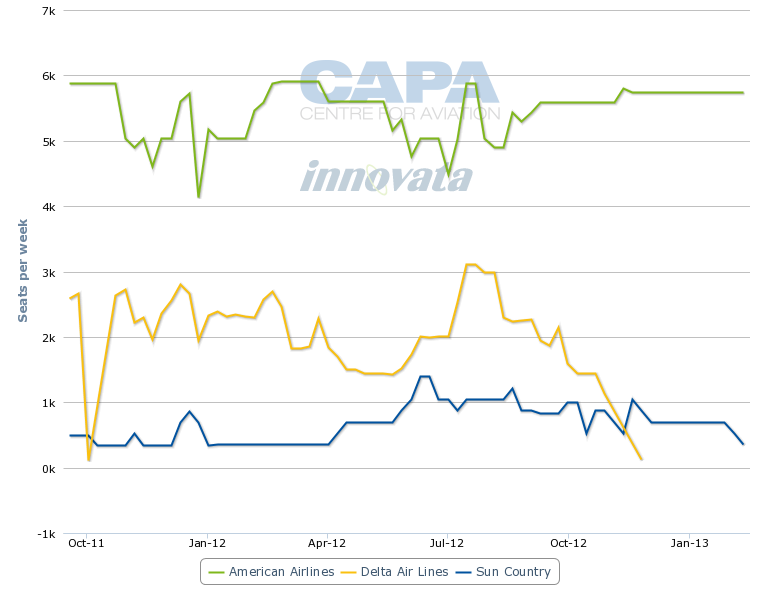 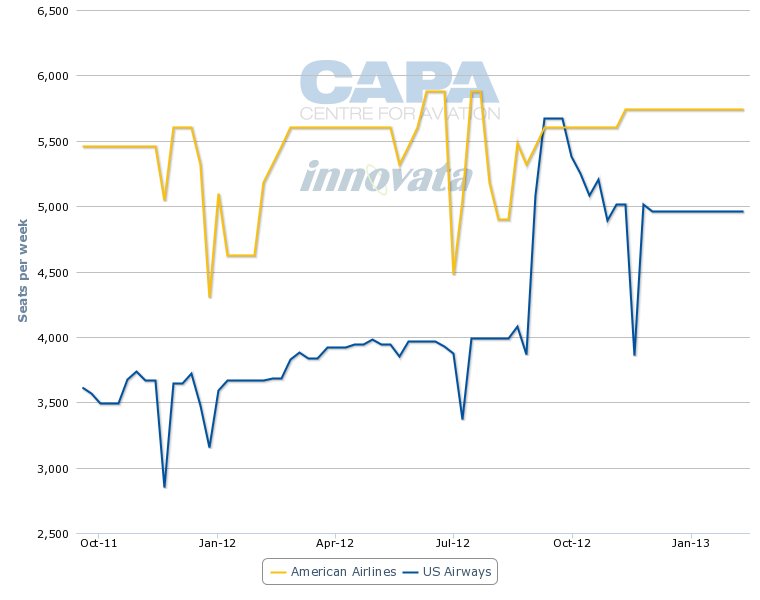 Other new market introductions planned by Spirit from Dallas include Latrobe, Pennsylvania in Jun-2013 and seasonal flights to Fort Myers Southwest Florida International Airport beginning in Nov-2012 and ending Apr-2013. Spirit began service from Latrobe (located about 50km southeast of Pittsburgh, Pennsylvania) in Feb-2011. Presently, Spirit is the only carrier offering commercial service from the airport to Orlando, Fort Lauderdale and Myrtle Beach, operating daily fights in nearly every market.

As a small, secondary and presumably cheaper airport, Latrobe would appear to better fit the market profile of Allegiant Air, allowing the carrier to operate to its large leisure destinations. But so far Allegiant has opted to serve destinations in eastern Pennsylvania – Harrisburg and Allentown (both served by Frontier) and Wilkes Barre-Scranton.

Spirit is also seeking authority to launch service to Los Cabos, Mexico from Dallas and San Diego. Spirit earlier this year took a major step in replicating in the western US its previously Fort Lauderdale-focused strategy of capturing VFR traffic from near international destinations. The carrier launched flights from Dallas to Toluca, Mexico in Jun-2012, and it plans to offer flights to Cancun beginning in Nov-2012.

Previously, Spirit management has stated travel patterns from Mexico have flowed naturally more to the US southwest and west coast, and explained Dallas would be a key part of its strategy to leverage those traffic flows.

Spirit in its latest round of route expansion will also foster new competition with Alaska Airlines when it launches service between San Diego and Portland, Oregon in Nov-2012. Currently Alaska enjoys a monopoly on the route, and will offer approximately 3,200 one-way weekly seats in the market when Spirit inaugurates its flights.

Alaska is more of a hybrid type of carrier, similar to JetBlue Airways in offering lower fares with medium frills. Alaska also has a strong resonance among passengers on the US west coast due to its long-standing operation in the region. Spirit may find it tougher to compete against Alaska in this particular market as Alaska has a loyal following out of its Portland hub who might not be inclined to opt for Spirit’s lower fares that exclude all amenities. San Diego-Portland is also a smaller-sized market than some of the larger routes Spirit has entered, so the catchment of price-conscious consumers is also diminshed. Spirit also competes with Alaska on flights from Portland to Las Vegas, but that is a larger market and is also served by Southwest Airlines.

Spirit may find it easier competing with Alaska from San Diego to Los Cabos, a leisure market that will likely attract a greater number of travellers drawn to the carrier’s lower fares. However, Alaska will likely counter Spirit’s inroads with a strong competitive response, and given those circumstances it will be interesting to see if Spirit succeeds in stimulating traffic between San Diego and Los Cabos.

The latest route developments by Spirit reflect the carrier’s confidence in its strategy of stimulating traffic in well-established markets. With a few exceptions it appears the strategy is showing some traction as Spirit grew its profits in 1H2012, jumping 134% to USD58 million. Spirit intentionally keeps its schedule nimble, and has pledged to pull out of markets that fail to meet its internal expectations. With double-digit growth planned for the next few years, Spirit seems to have concluded its future expansion plans should further grow its profits.