Despite encountering investor trepidation during 2015 for its rapidly declining unit revenues, Spirit Airlines continues to trumpet the resilience of its ultra low cost business model. The airline is stressing the ULCC concept has only touched the surface in the United States, and much runway remains to stimulate traffic with its low fares.

Spirit is also dismissing the notion that it steals passengers from other airlines, and insists that it actually enlarges the passenger pool for other carriers in markets it enters. Although some of the large US airlines appear to be shaping long term strategies to compete with Spirit’s low fares, Spirit believes their higher cost structures prohibit those airlines from matching the airline’s low fares over the long term.

Only time will tell if Spirit’s theories about the ability of large airlines to match prices over the long term will materialise. One wildcard in the heightened competition between Spirit and the large US network airlines is the ability of the bigger airlines to tout their superior operational performance, an area where Spirit lags behind its competitors.

Spirit’s unit revenues fell 12% year-on-year for the 9M ending Sep-2015, driven in part by pricing compression in a number of its markets. Generally, airlines are lowering fares in response to falling fuel prices. Spirit in particular has endured pricing pressure in Dallas, a market where it has a significant operation at Dallas/Fort Worth. Pricing declines in Dallas have stemmed from the rapid expansion undertaken by Southwest Airlines at Dallas Love Field after the dissolution of the Wright Amendment limiting certain long haul service from the airport.

The airline recently warned pricing pressure would continue through early 2016, and cautioned its profits could fall year-on-year. Offering a simple explanation of the current US domestic environment, Spirit CEO Ben Baldanza recently concluded there are “just more seats flying… larger carriers have grown as well as our own growth. And to fill those seats you need a little lower price… and that’s what’s happening in the US”.

Spirit’s unit revenue declines and its warnings of potentially lower profits in 2016 have obviously spooked investors. As of 30-Nov-2015 its share price was USD36.77 compared with a share price of roughly USD80 a year ago.

Even though its stock has taken a beating during the past year, Spirit’s bullishness about the ULCC potential in the US market remains intact. In fact, Mr Baldanza recently concluded that the market size for passengers only concerned about ticket price will likely reach 20% in the US. He stated the cost conscious traveller market size in Europe was already roughly 20%, and that the US and European markets were about the same size. Ryanair and other ULCCs have been operating in Europe for a number of years, allowing the cost conscious market size to grow more rapidly than in the US.

As the largest US ULCC, Spirit believes it is best positioned to capitalise on the cost conscious market potential, and projects transporting 45 million passenger annually by 2021 compared with around 17 to 18 million in 2015.

After growing 30% in 2015 and delivering operating margins of 22.5%, Spirit believes now over the long term its annual growth rate will fall between 15% to 20% with margins in the mid teens. Based on that assessment, Spirit’s growth would appear to be driving ample returns even with the added pricing pressure in the US market.

Spirit has always maintained that it only adds enough capacity in a market to support its operations, which largely entail one frequency per day on most routes. Data from CAPA and OAG for the week of 30-Nov-2015 to 6-Dec-2015 show that approximately 78 of Spirit’s domestic routes have one daily frequency. 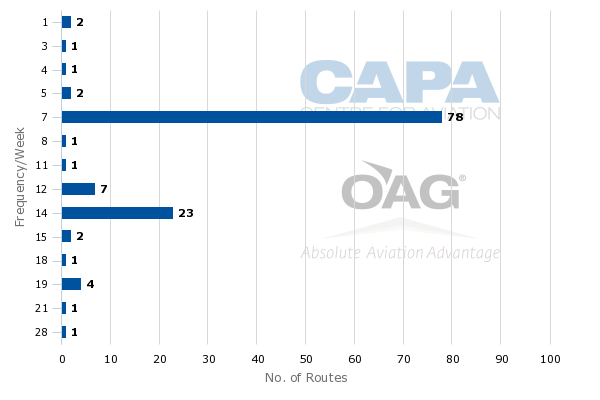 In the face of heightened sensitivity by the large US airlines to Spirit’s expansion, Spirit’s theory that it only stimulates enough traffic to cover its flying remains unchanged. “When we add a market, other carrier traffic grows,” stated Mr Baldanza. He concluded that typically Spirit grows about 6% in new markets, and in those markets the growth rate of other airlines also increases. “You could argue that we spill to other airlines, although they might laugh at that presumption,” he concluded.

Average growth rate of Spirit in its new markets, its competitors in those markets and in non-Spirit markets

Mr Baldanza also stated that those airlines grow at the same rate whether Spirit is in the market or not, and Spirit only carries traffic it prices into. “So this idea that we’re out stealing traffic from other airlines, stealing share, is just crazy,” Mr Baldanza declared.

But Spirit’s competitors have drawn different conclusions about its effects on the US market. American has stated 87% of its passengers during the last year were first time customers, and that the cost conscious passenger pool represents 50% of the airline’s revenue. American has concluded that it needs to compete effectively for that portion of its revenue, and has matched fares of low cost competitors. Over the long term, American aims to follow Delta’s lead and introduce a fare class targeted directly to cost conscious passengers.

Spirit may not be stealing passengers from other airlines, but it is clear that all carriers adopting various business models are competing for the customers that use price as the only factor in deciding to travel by air. Large airlines including American, Delta and United seem to be crafting strategies to combat what they presume as an ULCC threat over the long term. Spirit’s answer to the legacy price matching is to keep its unit costs excluding fuel flat or down. Its CASM ex-fuel for the 9M ending Sep-2015 was USD5.3 cents.

Mr Baldanza believes that it makes sense for higher cost airlines to match Spirit’s fares in an environment where fuel is markedly lower, but unless those airlines build their businesses to capture the 20% of the passenger market whose only concern is price, the fare matching is not viable over the long term.

Could operational integrity become a competitive crutch for Spirit?

One variable in the competition between traditional airlines and ULCCs is the value passengers place on operational performance. Arguably the most important element for cost conscious travellers after price is arriving at their destination on time. If Spirit’s competitors can match its prices and guarantee a higher level of operational integrity, then passengers may find travelling on other airlines more attractive.

Of the 13 airlines whose operational performance is monitored by DoT, Spirit’s rank was 10th in 1Q2015 and 13th in both 2Q2015 and 3Q2015. In an environment where larger airlines have an ability to both match fares and deliver a better on time performance, Spirit’s operational weakness could be a competitive crutch.

Moreover, Spirit in Nov-2015 estimated that it had 55% network overlap with Southwest Airlines (American was second with 51% overlap). Southwest has posted a markedly better on time performance than Spirit in 2015 (although lower than some of its network peers), and in addition to better operations, Southwest’s mantra of not nickel and diming passengers resonates with some customers.

Spirit versus Southwest on time performance 1Q2015 to 3Q2015

Source: CAPA - Centre for Aviation and the US DoT

Some of Spirit’s lacklustre operational performance is driven by its generally higher aircraft utilisation, which could be slightly adjusted in 2016. Mr Baldanza explained that Spirit has no plans to drastically change its high utilisation model, but “we think we can balance it a little better and that is what we are working on for our 2016 plan”.

New competitive US market place dynamics are unfolding as 2016 approaches

One element to be mindful of in the US market place as 2015 winds down and 2016 begins is the changing competitive dynamics between large airlines and ultra low cost airlines. The country’s larger carriers are not relenting in their quest to capture a share of the growing cost conscious traveller market that is the basis for Spirit Airlines’ business model. Spirit, meanwhile, believes its strategy remains bullet proof, and sees no reasons to adjust its growth targets in light of heightened scrutiny of its movements by its larger rivals.

The outcome of the new competitive elements in the US market is tough to predict. Perhaps the biggest winners in the short term are passengers that will benefit from the pricing battles being waged in the market place.