At the same time Spirit faces added cost pressure throughout 2014 driven by new US flight duty rules for pilots and preparation for a ramp-up for hefty growth during 2015, when capacity will increase by roughly 30%.

Spirit’s rationale is that it has ample (and presumably) profitable growth opportunities that remain untapped, underpinned by its estimate of accounting for merely 5% of US seats at the end of the decade. Given its steady financial outperformance and the effects of US consolidation, for the moment Spirit can afford the benefit of the doubt, filling a vacuum as it charges forward with its ultra low-cost strategy. 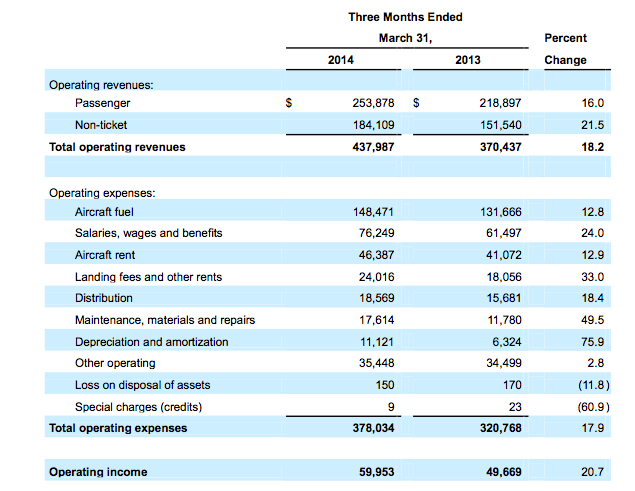 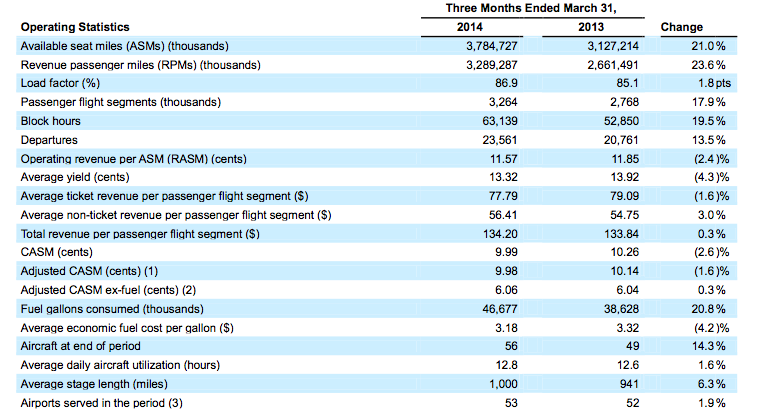 Several factors contributed to Spirit’s decline in operating unit revenues and passenger ticket revenue including cancellations from now well-documented winter storms in the US, a 6% increase average stage length, which dragged down unit revenues by 3ppt year-on-year and the shift of the Easter holiday from Mar in 2013 to Apr in 2014.

“We’re just fine with this trade-off and actually prefer it,” concluded Spirit CEO Ben Baldanza in a recent earnings discussion with analysts. He estimates that Spirit’s total fares – base fares plus customer add-ons (which for Spirit entails everything outside the ticket price) – is on average 40% lower than the carrier’s competitors when adjusted for stage length.

Compliance with new US pilot duty rules that took effect at the beginning of 2014 accounts for 2ppt of the projected unit cost increase for 2Q2014. Other drivers of the rise are Spirit’s preparations for a ramp-up in growth in 2015.

Despite the cost creep for 2014 (and potentially for 2015), Spirit assures that overall it can maintain flat unit cost growth for the two-year period covering 2014 and 2015 (compared with 2013), and possibly improve its cost advantage relative to other US airlines.

The carrier remains confident of getting its costs in-line within a two-year period as its begins to lap the effects of new pilot duty rules and works to improve costs in other areas of its operations. Spirit’s ultra low costs have been a key pillar of its consistent favourable financial performance, as its strong focus on cost control has allowed the airline to offer rock-bottom fares to induce the highly cost-sensitive customer to travel. Cost creep obviously is anathema to Spirit’s overall strategy.

Spirit plans ambitious 30% growth in 2015, but believes its margins should be preserved

Spirit’s projections of nearly 30% capacity growth during 2015 (as 15 Airbus narrowbodies come online) have led to some concern about the carrier’s margin preservation. Its pre-tax margin for 1Q2014 was 13.7%.

Mr Baldanza admitted that with the growth Spirit is planning for 2015, “we will have more than the normal amount of start-up and sloping of new routes”. But he believes some of the growth can be margin accretive, given the carrier’s business model of attracting customers that have been priced out of air travel. “We’re the kind of carrier that most of the other 98% of the industry is not overly worried about because we’re not actively trying to take people out of the business class cabins or their more frequent business traveller,” Mr Baldanza explained.

Perhaps Mr Baldanza’s assessment is not entirely the clearest picture of how other airlines view Spirit. Delta has tried to match Spirit’s fares on select routes in the past and during a recent earnings discussion American Airlines president Scott Kirby deemed Spirit “a real competitor...they do well and we care about them in competing with them and watch carefully what they do”.

Prior to the American-US Airways merger (and before US Airways executives assumed management of American), Spirit expanded rapidly from Dallas/Fort Worth, especially during American’s Chapter 11 reorganisation. Dallas is now Spirit’s second largest base.

And while American accounts for nearly 83% of the seats on offer from Dallas/Fort Worth (based on CAPA and OAG data for the week of 5-May-2014 to 11-May-2014), Mr Kirby’s comments show management at the new American is certainly not dismissive of Spirit’s presence in the market. 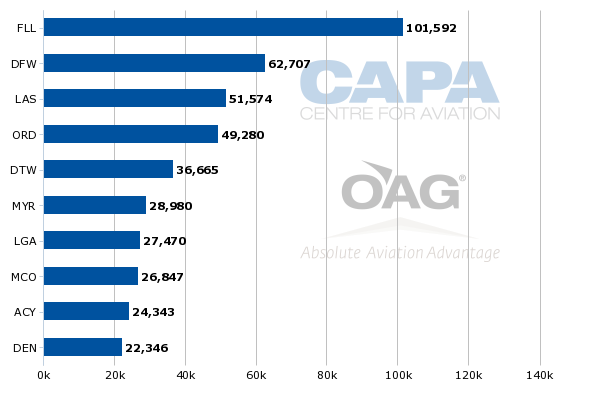 Spirit is basing its assertive expansion targets for 2015 on the premise that it is still very much a growth carrier, noting that with just 50 aircraft for the 12M ending Jul-2013, it only represented 1.4% of the average weekly seats in the US. It estimates a 5% share by 2021 with a fleet of roughly 140 Airbus narrowbodies. Mr Baldanza believes that overall there are fewer seats in the market than during the last couple of years, which has resulted in higher fares.

As such, Spirit’s low-cost model allows it to reprice some of the traffic that has been lost to rising fares. Still, even for an airline with a solid financial track record like Spirit, 30% is a large chunk of growth to absorb. 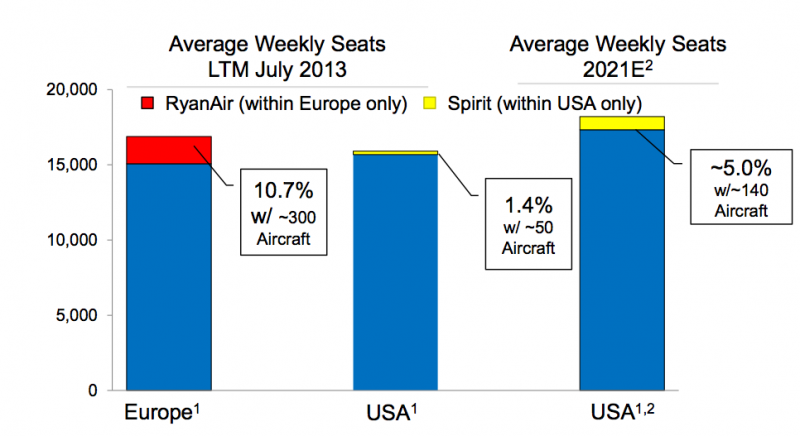 Despite its favourable track record, Spirit’s ambitions are not without risks

In the shorter term, Spirit has a favourable outlook for 2Q2014 and 3Q2014, and believes the overall industry environment is positive as capacity discipline is still intact and fares are stable.

Obviously Spirit believes its whopping capacity growth for 2015 will not disrupt the supply-demand equilibrium in the US market place given it represents such a small fraction of the seats on offer in the country.

While Spirit is exuding confidence that it will easily absorb its planned growth and keep its margin strong, its rising cost and unit revenue pressure could become formidable challenges as the carrier works to solidify the ultra low-cost carrier model (ULCC) in the US. There are no doubt significant opportunities for carriers like Spirit created by the consolidation that has resulted in three global airlines and Southwest (who expects to complete its merger with AirTran in 2014), but Spirit’s unit revenue and cost performance does create some overhang as the carrier enters a high-growth period.

Spirit did absorb 22% capacity growth for CY2013 rather favourably, so perhaps it is too early to dismiss the airline’s ambitious growth targets for 2015. But executing that growth is not without risks, even for a Wall Street darling like Spirit.