After years of being heralded by Wall Street for its stellar financial performance, US ULCC Spirit Airlines has been on the defensive in 2H2015 as investors navigate the airline’s 30% capacity growth alongside outsized decreases in unit revenues compared with the rest of the industry.

Spirit is defending its capacity expansion, contending that it can deliver higher returns by growing than by not expanding. Part of the airline’s logic is that its cost structure allows it to be one of the most efficient seat producers within the industry.

Similar to other airlines, Spirit is attempting to convince investors not to place a significant amount of attention on unit revenue performance. Instead, the airline is trying to direct attention to margins and earnings as its stock price has faced some compression in the aftermath of growing capacity and falling unit revenues.

Spirit during 1H2015 recorded a 12.5% decline in unit revenue and a 10.7% drop in yields. Even as most US airlines endured unit revenue contraction during 2015, no carrier has posted double digit declines. American, Alaska, Delta, Southwest and United all had 1H2015 passenger unit revenue declines in the low to mid-single digits and JetBlue and Virgin America posted gains year-on-year.

As a result of the unit revenue degradation the airline’s stock price has fallen from a high of USD84 in Dec-2014 to approximately USD47 at the beginning of Oct-2015. 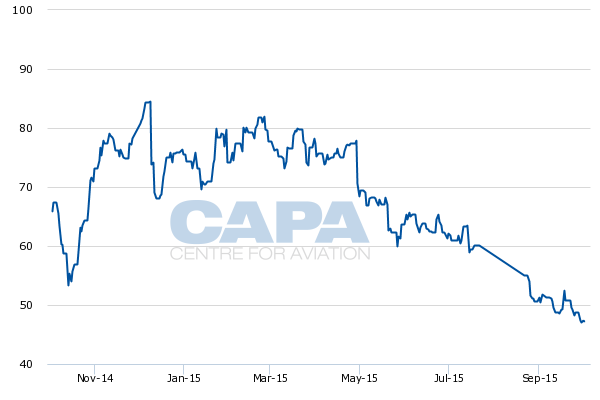 Recently, Spirit CEO Ben Baldanza stated that the compression in the airline’s stock was frustrating given that the company’s margins are higher than the rest of the industry and that the airline was keeping costs low through its expansion. Spirit’s unit cost excluding fuel and special items for 1H2015 was USD5.76 cents.

Outlining Spirit’s disproportionately larger drop in unit revenue, Mr Baldanza remarked that prior to change in the US revenue environment, Spirit’s average fare was USD80 while the industry average was roughly USD180. He stated taking USD10 off smaller base makes the decrease in unit revenue look bigger. Spirit’s non-ticket revenue per passenger flight segment during 2Q2015 was USD54.71, down 1.4%, but far above the levels posted by most airlines.

Mr Baldanza reiterated that Spirit manages to profitability and that “profits up year-on-year in an environment of low fuel prices is really good for Spirit”. He stated Spirit’s total accessible market was larger given is lower costs, and its ability to earn higher returns. Spirit’s pre-tax return on invested capital in 2Q2015 was 29.4% and 18.8% after tax.

Mr Baldanza acknowledged that Spirit has gotten some pushback from investors that the rest of the industry can also improve margins in a low fare environment, so Spirit’s relative outperformance is not as great when lower oil prices drive fares lower.

The airline has also raised concerns in the investment community over its 30% capacity growth in 2015. United has revised its domestic capacity growth downwards twice in 2015 to 0.25% to 0.75%, and American has also revised capacity projections to a 1% increase. At 76 aircraft, Spirit is a much smaller airline than the US mega carriers, so obviously as a growth company its capacity expansion will be higher. But Spirit’s 30% level for 2015 has left investors - typically most interested in the short term - jittery.

Mr Baldanza concluded that Spirit is not the “biggest offender” in total seats added to the US market in 2015, and given that its costs are much lower and its returns are higher “we should be the absolute last ones to shrink”. He stated that Spirit was the most efficient producer of seats in the industry. The industry is not growing too fast at unit costs of five and half cents (excluding fuel), says Mr Baldanza. It might be growing too rapidly at eight to nine cents unit costs, Mr Baldanza concluded.

Spirit projects 20% to 22% capacity growth in 2016 with about 20 new route additions versus 35 to 40 during 2015. Roughly 20%, or 33, of Spirit’s total markets have launched since Jan-2015, are already earning 9% to 10% returns in an environment of high industry capacity and aggressive competitive reaction, said Mr Baldanza.

Essentially, Mr Baldanza stated that Spirit’s growth is accretive, which is a message that all airlines that are growing capacity in 2015 are trumpeting. Larger airlines such as American, Delta and United are achieving their growth through aircraft upgauge and densification, while Spirit is executing its growth through aircraft deliveries. Its fleet is growing from 65 Airbus narrowbodies at YE2014 to 80 at YE2015.

Spirit is presently operating in roughly 185 markets, and plans to add 125 during the next five years. With its ULCC cost structure and the price of fuel, Mr Baldanza declared that there is not a single large market (at least 200 passengers per day each way) within is scope of service (defined by where the airline can legally fly and aircraft range) that it could not add and earn on target margin. It is lofty declaration for an airline that has drawn competitive responses from mega large rivals American and Delta.

American has stated it is matching fares of low cost airlines and Delta has created a special fare class to appeal to the cost conscious travelers Spirit targets. Mr Baldanza stated that the airlines responding to Spirit’s expansion are going to do what is necessary to maxmimise profit per aircraft, which is the strategy adopted by Spirit.

“We look at what other carriers do and watch what they’re doing and will change our business only to the extent necessary to allow ourselves to keep growing and keep earning high margins,” said Mr Baldanza.” As other airlines change tactics, he stated, they are not generating five and a half cent unit costs and not generating USD50 dollars in ancillary revenue - that is only getting higher.

Spirit’s overarching message to investors is that there are few investments in a given portfolio earning 20% plus operating margins on 30% growth. It is a solid argument, but the drop in the airline’s stock price shows that investors are still concerned about Spirit’s high growth numbers when overall industry capacity in the domestic market is creeping up. The majority of both Spirit’s seats and ASMs – more than 90% – are deployed in the US domestic market.

Many investors are either new to the airline business or are examining airlines after a years-long hiatus given the volatility of the sector’s performance. If there is a decline in any one key revenue metric, they will take some convincing that the new found profitability is sustainable.

This is in general unfortunate for the longer term outlook for the US industry; so long as airlines are forced to respond to often uneducated and unduly short term analysis, there are enormous pressures on management to conform to a simple "profit-now" profile. Where the typical low cost model, in markets where they have cost advantages, is to expand rather than driving yield up, that model risks corruption.

Spirit has delivered consistent profits since its IPO in 2011; but its continued high growth targets and downward pressure on unit revenues will remain under close scrutiny despite its margin and profit expansion.