SpiceJet’s shares gained 5.5% on Friday, after the company confirmed it is seeking fresh investments to raise USD50-75 million for its future expansion. According to media reports, the LCC is in talks with media baron, Kalanithi Maran, who is reportedly considering investing close to USD100 million in the New Delhi-based airline. In Feb-2010, Dubai's Istithmar sold its 13.4% stake in SpiceJet.

PAL President, Jaime Bautista, stated he expects the airline industry to remain weak until at least 2011, due to an ongoing lack of demand, which is putting continued pressure on yields. He added, “we are just waiting for the economy to recover and hopefully one year or two years from now the industry [would] pick up…What the airlines do is to offer attractive fares. If we will not do that, the number of passenger will be low”.

Qantas shares gained 0.4%, as CEO, Alan Joyce, in an interview with Sky News Business, stated the carrier is seeing business demand improve, adding that business fares and yields are expected to follow suit. 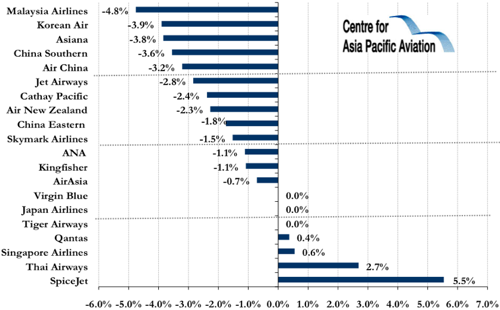