India’s SpiceJet slumped 8.6% in trade yesterday after the LCC announced it had placed a USD446 million order with Bombardier for 15 Q400 NextGen regional aircraft. SpiceJet also took options on another 15 Q400s, which could increase the deal to USD915 million if converted. Government intervention in the Indian market is also weighing on airline shares in the region.

Markets responded negatively to the order, which is a key strategic announcement from new owner Kalanithi Maran and the LCC’s first move away from its single-aircraft-type business model. Much to the chagrin of SpiceJet shareholders, the Indian government continues to intervene in the market, preventing airlines from charging high fares for last-minute bookings. The DGCA issued new directives to airlines yesterday asking them to lower certain fees from their website.

In Europe, despite wider markets ending at multi-year closing highs for the third straight session, most LCCs closed lower. The increasing price of oil, which is trading at just under USD90 a barrel, may be weighing on the minds of investors. Dart Group gained 4.6% and Vueling firmed 2.3% as it announced it carried 777,000 passengers (+4.4%) in the month.

In London, reports surfaced that flybe is pricing its GBP60 million listing at GBP 295 pence per share. British Airways, which owns 15% of the regional LCC, previously stated it plans to maintain its shareholding. The LCC has stated the IPO is planned for Tuesday 14-Dec.

In the US, JetBlue announced it carried 2.0 million passengers in Nov-2010, a 12.4% year-on-year increase. Despite the news, shares in the LCC were relatively stable (+0.4%). CFO Ed Barnes warned on Wednesday that forward bookings over winter were weaker than expected. 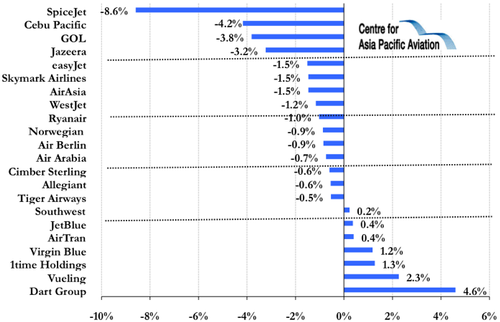