Management at ULCC Spirit Airlines continues to push forward with ambitious plans to grow capacity by approximately 30% in CY2015 even as overall industry supply in the US domestic market appears to be creeping up.

Underlying Spirit’s bullishness is a 4% decline in unit costs excluding fuel for 1Q2015, and the airline believes a decrease in that range is possible for CY2015. The company concludes even if the capacity increases puts some pressure on unit revenues, its cost performance will help lift margins, which is a major focus for the airline.

Alongside its aggressive capacity growth, presently Spirit estimates recording an operating margin of roughly 20% in CY2015, which ultimately could prove to be a conservative target.

Spirit has raised eyebrows since declaring its 30% capacity growth target for CY2015 earlier in 2014, and since the company issued that guidance it has fielded questions about how it intends to execute the growth in an ever maturing US market place.

During a recent earnings discussion Spirit CEO Ben Baldanza stressed that “the point we have tried to make...is that a high-growth year like next year [2015] ...may have some push back on RASM [revenue per available seat mile] side..but also creates a really good opportunity on the CASM [cost per available seat mile] side since we’re a margin driven airline". Notably he said "If we can drive higher margins with a little lower RASM and an even greater lower CASM, that’s a great thing for us”.

The better than expected cost performance during 3Q2014 was driven by improved operational reliability and lower depreciation and amortisation expense. 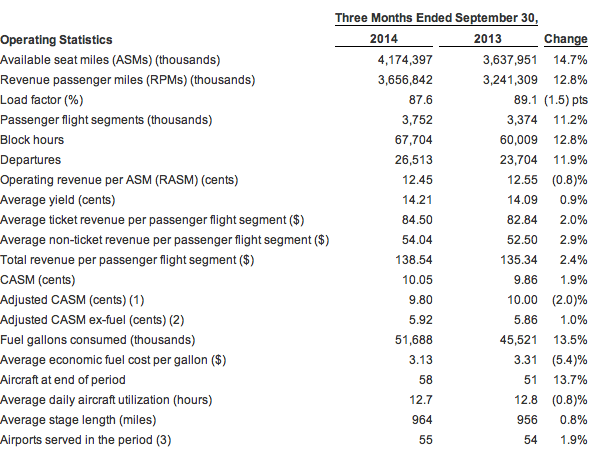 The airline’s planned capacity deployment during CY2015 mirrors its strategy during the last couple of years after a rapid expansion into the US domestic market – connecting the dots as Mr Baldanza noted that most of the growth is targeted to new city pairs. Spirit has a footprint in may large US metro areas including Dallas, Houston, Chicago and the San Francisco Bay area.

He explained during the last few years Spirit has typically only added one to two completely new markets to its route network annually.

See related report: Spirit Airlines joins the dots in 2014, with also some new growth in Kansas City; US ULCCs Part 3

Spirit seems to be ignoring Frontier’s transition to a ULCC

One new city Spirit has already unveiled for 2015 is Cleveland, a market where ultra low cost airline Frontier is rapidly expanding in the wake of a significant pull-down by United Airlines of its smallest hub.

Mr Baldanza is dismissing the notion that Spirit is entering into a foot race with Frontier, which is now owned by Spirit’s former largest shareholder Indigo Partners, and has transitioned to a full blown ultra low cost airline.

Spirit’s CEO stated the airline had been examining launching service from Cleveland for quite some time and “worked out a good deal with Cleveland...our launch in Cleveland has not been driven by what we’ve seen anyone else do”.

Overall, Spirit seems to be brushing Frontier’s ULCC transition aside as Mr Baldanza declared: “In terms of the ULCC space, we really don’t see any meaningful competition right now other than sort of Allegiant. But as we’ve said before, Allegiant is serving different sized cities than we are. So in many ways our business model and Allegiant’s are more synergistic than they are competitive.”

Some of Spirit’s CY2015 supply growth stems from aircraft upgauge

A small portion of Spirit’s growth in CY2015 is upgauging to higher density Airbus A321s. The airline is scheduled to add 15 Airbus narrowbodies during the year, with six A321s joining the airline’s fleet 2H2015. The larger A321s have 40 more seats than Sprit’s existing A320s. 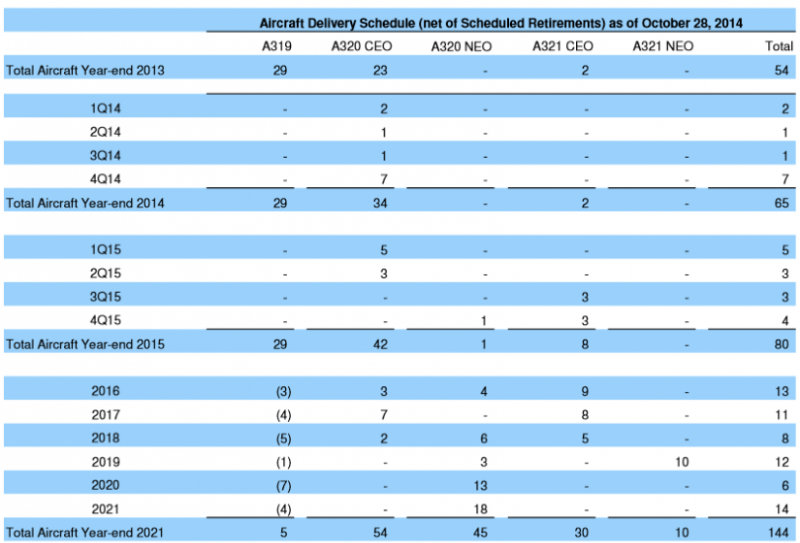 With the new aircraft Spirit will continue to maintain a relatively young fleet, which the airline views as an advantage in terms of maintaining a competitive cost structure. Previously, Spirit has estimated that each new aircraft is 0.1% to 0.5% dilutive to its unit costs.

As Spirit warns of some unit revenue pressure from its ample growth during CY2015, its unit revenues in 3Q2014 decreased by 0.8% as most of the company’s US airline peers recorded strong unit revenue growth. At the same time Spirit’s load factor fell 1.5ppt year-on-year in 3Q2014 to 87.6%.

The decline in unit revenues was driven by increased stage length while the drop in load factor stemmed from a strong performance in 3Q2013, and an increase by Spirit in flying on Tuesdays and Wednesdays in 2014.

Mr Baldanza stated Spirit concluded the increased operations on those specific weekdays (which are typically lower demand) would be margin accretive in the robust US demand environment. Spirit extended the increase in operations on those days during Oct-2014 and remarked that its load factor during the month would fall 1.5ppt year-on-year “a tradeoff we are comfortable with given the expected margin benefit of such flying”, Mr Baldanza stated.

Spirit hints that margins could be higher than 20% in CY2015 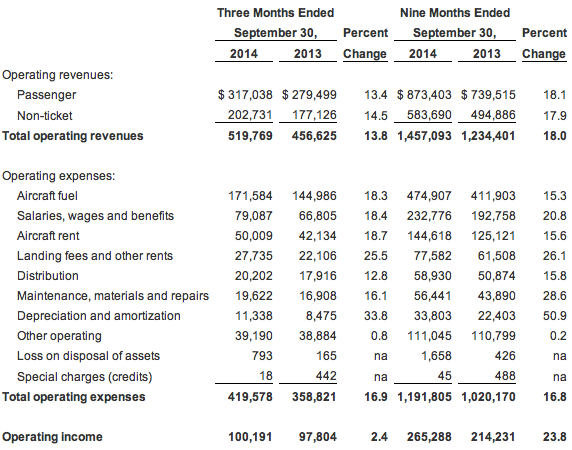 Previously, Spirit has noted it is attempting to record operating margins of 15% to 17% over the long-term. But Mr Baldanza noted that is essentially a three year historical average for the company. “If we dropped the oldest of those three years and added in the most recent of the last three years on its own would move to 16% to 18%”.

Put in that context, it seems as if Spirit believes it can easily achieve its 20% operating margin projections in CY2015, some of which are driven by the fall in fuel prices. Mr Baldanza believes that lower costs and “greater customer engagement should allow us to fully meet or beat our aggressive margin targets in every quarter next year assuming the demand environment remains strong and fuel remains near current levels”. Spirit’s CEO seems to be indicating that the airline could deliver an operating margin higher than 20% in CY2015.

Spirit faces changing market dynamics ahead of its capacity push

Perhaps Mr Baldanza has a right to retain a sense of bullishness over Spirit’s ability to deliver on its ambitious margin targets for CY2015. The airline is one of the best performers in the US airline business, and given its target customer – low-yielding, cost conscious passengers – there does seem to be room to grow in that space. However, absorbing Spirit’s high growth targets for CY2015 is still a challenge.

Even as Spirit has turned a strong financial performance during the last few years, there are threats it faces as it unleashes an aggressive growth plan. The airline consistently stresses that its target passenger is of no interest to legacy airlines, but some of the larger US airlines appear to be taking steps to refine their pricing and product strategies to compete with Spirit on some level. And although Spirit seems unfazed by Frontier’s entry into the ULCC space, it is another airline vying for a passenger type that has no apparent loyalty to an airline beyond ensuring the lowest price.

Those are not insurmountable obstacles for Spirit by any stretch of the imagination. It has been the first mover in a market that has become neglected as the major airlines push yields upwards. But the space it has successfully exploited in the US market place is about become a bit more crowded.