Southwest’s purchase of AirTran approved; USD1.4bn acquisition to be closed on 02-May-2011

The US Justice Department, as expected, approved Southwest Airlines’ acquisition of AirTran Holdings stating it would not substantially reduce competition.

The presence of LCCs such as Southwest and AirTran in the domestic market “has been shown to lower fares on routes previously served only by incumbent legacy carriers”, the Department said in a statement announced the closing of its investigation on 26-Apr-2011. While there is some overlap between the airlines on certain non-stop routes, the combined carrier would offer service on routes that neither AirTran nor Southwest currently serve, the Department said.

Southwest stated it planned to close the USD1.4 billion acquisition on 02-May-2011. After receiving antitrust clearance for the merger, Southwest is awaiting an order from the Transportation Department related to the transfer of routes, which should come "in the next day or two," a Southwest spokesman said.

“After a thorough investigation, the division determined that the merger is not likely to substantially lessen competition. The merged firm will be able to offer new service on routes that neither serves today, including new connecting service through Atlanta’s Hartfield Jackson International Airport from cities currently served by Southwest to cities currently served by AirTran,” The Department of Justice stated.

“Although there are overlaps on certain non-stop routes, the division did not challenge the acquisition after considering the consumer benefits from the new service.  Also, the airports affected by the overlaps are not subject to restrictions on slots or gate availability.  Where such restrictions exist, entry by other airlines may be particularly difficult,” the Department continued.

Southwest announced on 27-Sep-2010 it had entered into a definitive agreement to acquire all of the outstanding common stock of AirTran for a combination of cash and Southwest Airlines' common stock.  AirTran stockholders approved the acquisition of AirTran by Southwest Airlines on 23-Mar-2011, which, when combined with DOJ approval and other regulatory clearances, constitutes one of the final steps toward closing the transaction.

The next step in the integration for Southwest will be to begin work on securing a Single Operating Certificate (SOC) from the Federal Aviation Administration, which is projected for completion in 1Q2012. Full integration is expected in 2013. The US FAA has already accepted Southwest's transition plan.

Until then, Orlando-based AirTran will maintain its brand, policies, procedures and other aspects of its operations "for some period of time", most likely for months, Southwest CEO Gary Kelly said. On 21-Apr-2011, Southwest stated it anticipates that Bob Jordan, Southwest's Executive VP Strategy and Planning, will be appointed as President of AirTran Airways to help guide AirTran through its integration with Southwest.

Mr Jordan will continue to serve on the joint Integration Board consisting of Mr Kelly, Bob Fornaro (AirTran CEO), Mike Van de Ven (Southwest Executive Vice President and Chief Operating Officer), Loral Blinde (AirTran Senior Vice President Human Resources and Administration), and Jeff Lamb (Southwest Senior Vice President Administration and Chief People Officer). The Integration Board will continue to provide overall direction of the integration efforts. This structure, along with the Integration Leadership roles that Lamb and Blinde have, will continue after closing of the transaction. Mr Fornaro, after the transaction closes, will move to a new role as a full-time consultant for the integration of the two airlines, working closely with Mr Kelly and Mr Jordan to ensure a smooth transition.

The deal will immediately increase Southwest's size by one-fourth, although it will temporarily operate AirTran as a separate airline. Southwest has said the combination with AirTran will serve more than 100 destinations, including four new airports added by the carriers in 2011. It estimates this will generate hundreds of millions in annual savings for consumers. “These fare savings will result from expanding the well-known 'Southwest Effect' of reducing fares and stimulating passenger traffic wherever Southwest flies,” the carrier has said.

With the merger, Southwest will expand in large US East Coast markets such as Atlanta and Washington once the acquisition is completed. Southwest will gain AirTran's hub in Atlanta, which Southwest currently does not serve, and pick up AirTran's service to Mexico and the Caribbean.

AirTran is the second largest carrier at Atlanta, a market dominated by Delta Air Lines at present. 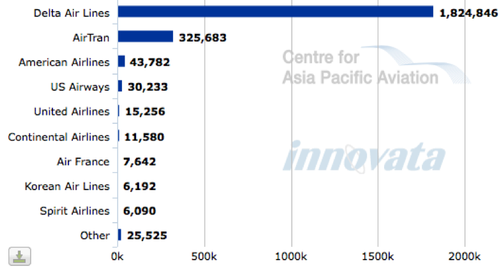 Atlanta Hartsfield-Jackson International Airport traffic (US flights in millions): 2002 to 2011 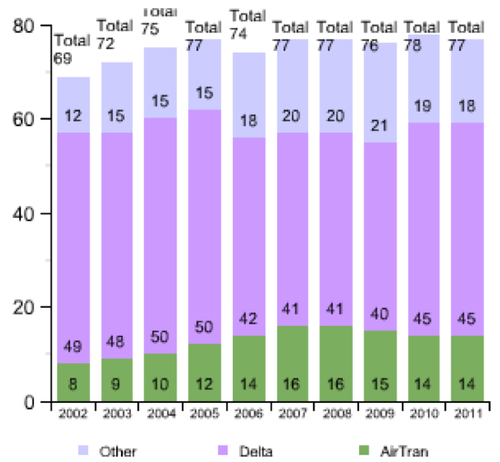 Source: US Bureau of Transportation Statistics
*  Before October 2002, only carriers operating aircraft with more than 60 seats or 18,000 pounds in payload reported traffic data
** 2011 represents data for February 2010 - January 2011.

A total of 32 domestic airlines operated at the airport, the largest in the US based on scheduled enplaned revenue passengers. In the 12 months ended Jan-2011, the airport handled 38.4 million arriving and departing passengers.

The top US destinations airports from Atlanta are Orlando, Fort Lauderale and New York. 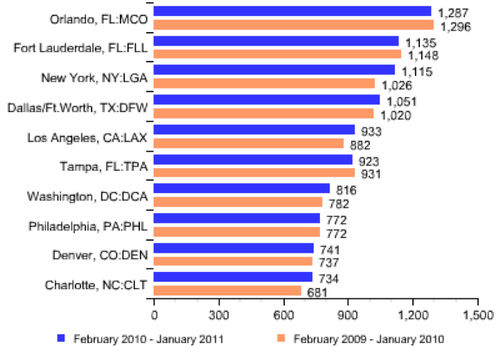 Atlanta is AirTran’s largest market, followed by Orlando, Baltimore and Milwaukee. The carrier’s six largest domestic sectors are all linked to Atlanta. AirTran is based in Orlando and services 69 cities in the US, Mexico and the Caribbean. AirTran reported revenues of USD2.6 billion and handled approximately 25 million passengers in 2010. Dallas-based Southwest Airlines services 72 cities in the US and had revenues of USD12.1 billion and 88 million passengers in 2010.

Source: US Bureau of Transportation Statistics
*   Based on total enplaned passengers at all airports in a city
** The table shows the carrier's share in each of the markets 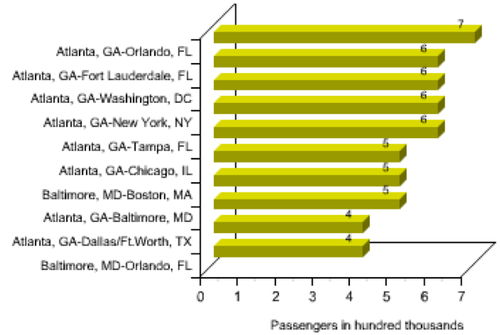 Source: US Bureau of Transportation Statistics
* Based on enplaned passengers of all airports for a city pair February 2010 - January 2011

Another US merger approved

Some consumer advocates have expressed concerns related to the increasing number of mergers in the US market, which has resulted in a reduced number of US airlines. In the past three years, Delta has acquired Northwest, United has combined with Continental, and now Southwest is completing its acquisition of AirTran.

Meanwhile, US Airways President Scott Kirby in Mar-2011 noted that the outlook for a merger remains positive but stated a timeframe for such a development is five to seven years. "We think there's significant value to be generated through another round of consolidation with US Airways," noting "it's probably five to seven years from now that it will happen." He also stated that "there are three possibilities and 100 paths [for] how we get from here to there [and] each has a 1% probability". Possibilities existing with either American Airlines, Delta or United.