Southwest Airlines' shares remained unchanged yesterday, despite the carrier reporting a strong set of financial results for the three months to Jun-2010 (2Q2010).

The carrier reported a 23% increase in net profit and a 195% increase in operating profit in the period, to USD112 million and USD363 million, respectively, with revenues increasing to an all-time quarterly record of USD3.2 billion in the quarter, for year-on-year growth of 21%.

On a unit basis, revenues increased by 22%, also to an all-time quarterly record, with yields and average fares also up by double-digits (by 17.3% and 19.3% respectively), with the carrier commenting: “Although business demand has not fully recovered, it has strengthened, and consumer travel demand is robust.”

Southwest Chairman of the Board, President and CEO, Gary Kelly, stated the carrier was “extremely pleased” with the improved result. The carrier added: “Our second quarter 2010 earnings performance (excluding special items) was the second-best in our history, behind second quarter 2006. This was, indeed, a strong performance, despite significantly higher fuel prices and other cost pressures”.

The carrier also experienced record traffic levels during the quarter, despite flat year-on-year capacity. Based on traffic and revenue trends to date, the carrier is expecting “strong” unit revenue growth in 3Q1010. However, Southwest added: “our year-over-year growth rates will face more and more difficult comparisons, of course, due to the rapid revenue recovery that began at Southwest a year ago”.

Also in the US LCC market, shares in JetBlue slipped 0.5%. The CEO of JetBlue strategic investor Lufthansa, Stephan Gemkow, stated the carrier would maintain its stake for JetBlue, commenting: “We’re sorry, but JetBlue is not for sale". 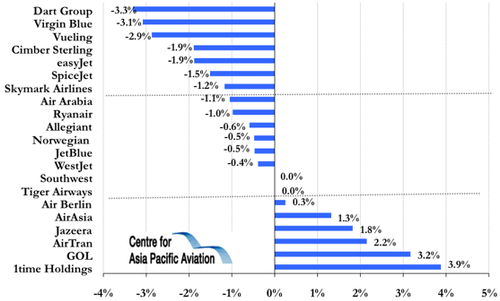