US LCC stocks were mixed on Monday with AirTran and Allegiant both weakening marginally (-0.1%) while Southwest (+0.5%), JetBlue (+0.6%) and WestJet (+1.3%) gained ahead of the release of third quarter financial results this week.

According to SmarTrend, analysts on average expect Southwest to report earning of USD0.25 per share on sales of USD3.2 billion for the third quarter when it releases its financial report on 21-Oct-2010. For the full year, analysts expect the company to post EPS of USD0.72, up from USD0.03 on sales of USD2.7 billion in the previous corresponding period. SmarTrend stated it is bullish on Southwest shares with subscribers alerted to "buy" on 27-Jul-2010 at USD12.07. The stock has risen 7.3% since then.

For JetBlue, SmarTren commented that analysts on average expect the carrier to report earnings of USD0.19 per share on sales of USD1 billion when they report, also on 21-Oct-2010. For the full year, analysts expect the company to post EPS of USD0.43 compared to USD0.04 in the previous corresponding period. SmarTrend is bullish on shares of JetBlue and its subscribers were alerted to "buy" on 27-Sep-2010 at USD6.33. The stock has risen 4.1% since the alert was issued.

Meanwhile, Deutshce Bank and CRT Capital Group have estimated that the eight largest US carriers will post third-quarter combined net income ranging from USD2.1 billion to USD2.4 billion, as airlines benefit from improved load factors and yields. Collective revenues for the eight carriers are expected to gain 17% to USD32.5 billion. 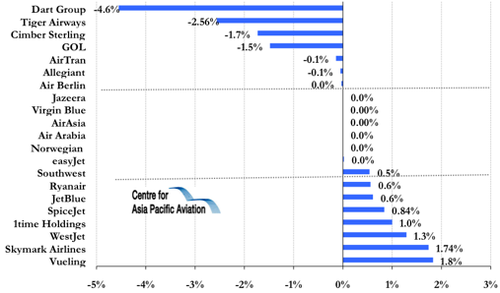