As three distinct business models – global network airlines, hybrids and ultra low-cost airlines – have taken shape in the US market during the last few years, Southwest Airlines has purposely avoided aligning itself with a particular strategy. Instead the airline has opted to continue inflating its maverick low-fare image, which is at risk of fading as the US landscape changes in the medium to long term.

But despite lingering questions over how Southwest intends to position itself in the market place, the airline’s financial foundation has remained strong, evidenced by its stature as one of the few global airlines to consistently sustain investment-grade status.

Even as Southwest faces challenges in maintaining its maverick image, ensuring its message still resonates with customers and widening a shrinking cost gap with its legacy airline peers, most of its fundamentals remain on solid ground.

After a strong 1Q2014 performance in which Southwest more than doubled its top-line earnings, grew operating revenues by 2% and recorded passenger unit revenue growth of 3.5%, the airline is so far encouraged by demand and revenue in 2Q2014.

Its passenger unit revenues in Apr-2014 increased by 7%-8% year-on-year; however, like all airlines, Southwest benefitted from the shift of the Easter holiday from March to April in 2014. But the carrier is encouraged by its bookings for the remainder of 2Q2014, declaring a solid increase in passenger unit revenues for the quarter as its capacity remains flat year-on-year.

In addition to its favourable cash balances and leverage ratios, Southwest has focussed on shareholder returns in the form of USD1.7 billion in stock buy-backs and dividends since 2011. It is worth noting that Southwest was consistently delivering a return to shareholders in some form prior to Delta’s declaration of a dividend for the first time in a decade during May-2013. 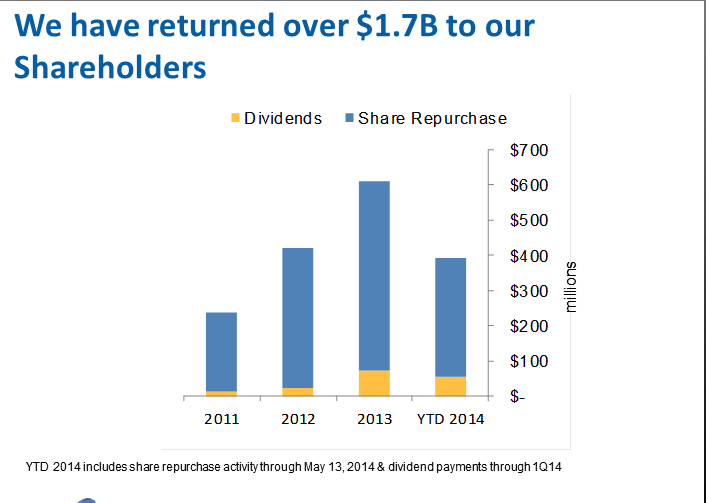 Southwest deserves some recognition for delivering dividends and keeping its balance sheet relatively stable during the long integration of AirTran Airways, which Southwest purchased in 2010.

Although the integration of AirTran has arguably taken longer than necessary, Southwest intends to shutter the AirTran brand by YE2014 and should record its projected USD400 million in pre-tax synergies in 2014. In contrast United, which undertook a more complex merger with Continental, has not yet reached its USD2 billion in estimated synergies four years after the carriers merged.

After Southwest’s unit cost, excluding fuel and profit sharing, increased 3.5% in 1Q2014, the airline projects a 2% to 3% increase in both 2Q2014 and CY2014. Some of the main drivers in Southwest’s cost headwinds are technology spend – the carrier is making a USD100 million investment in a new reservations system – and the expense of some aircraft sitting idle as they transition from the AirTran livery and configuration into the Southwest single class layout.

Southwest believes it can possibly achieve some cost relief in 2015 as its fleet utilisation returns to more normal levels and the number of seats it deploys grows 2% to 3% year-on-year.

As previously reported by CAPA, none of Southwest’s cost estimates for CY2014 or CY2015 factor in the likely expense from labour contract negotiations, which are occurring with nearly all of the airline’s labour groups.

Southwest maintains that it can achieve cost neutral contracts that are beneficial for employees, but its historically favourable relationship with its labour groups has become strained during the past year as the airline has attempted to negotiate contracts designed to aviod further deteriorating the historical cost advantage it held versus its legacy peers.

During 1Q2014 Southwest’s USD8.50 cent unit cost excluding fuel and profit sharing was lower than its legacy peers, but more closely aligned with hybrid carriers Alaska and Hawaiian Airlines. Southwest did record a passenger unit revenue advantage relative to Alaska and Hawaiian, but at 600-plus aircraft Southwest is more than twice the size of either of those airlines. It seems as if Southwest should be recording more revenue from its larger asset base.

In addition to looming cost and labour challenges, Southwest also faces obstacles in how it aims to position itself as the US market evolves into three distinct business models – global network airlines, hybrids and low-cost airlines.

Even as it officially begins operating to near international destinations under its own brand in Jul-2014 (operating service to Aruba, Jamaica and the Bahamas), Southwest does not have the global network scope of its legacy peers. Southwest is mostly a domestic carrier, and, encouraged by its pilots, has opted not to pursue partnerships to broaden its network scope, except for a short-lived tie-up with Mexican low-cost carrier Volaris.

Southwest’s mature cost structure prohibits the airline from matching Spirit’s price points, yet it does not offer the same passenger comforts as JetBlue, which features leather seating and a greater seat pitch on its Airbus A320s versus Southwest’s Boeing 737-800/s700s. In 1Q2014 JetBlue’s average fare of roughly USD168 was only UDS11 higher than Southwest’s average USD157 fare.

In the evolving environment passengers may be left scratching their heads over the value proposition Southwest offers as its fares rest at the mid-point of the spectrum yet its product in some ways lacks the attributes of other carriers. Obviously this a problem further off on the horizon for the carrier since it looks as if CY2014 should be a solidly profitable year for the carrier.

Southwest continues steady as she goes; but it should have vision for the future

At the moment it seems as if Southwest is leading a paradoxical existence – sustaining its historical strong financial results, which includes the only US carrier to achieve investment grade status, while attempting to cover the cracks in the foundation that has supported its financial strength.

Publicly it can only create a positive message regarding its labour talks as it works to convince its employee groups of the importance of cost-neutral contracts it is seeking. But its chances of successfully garnering the contract elements it needs to widen its cost advantage gap are slim, which signals that tough negotiations are ahead for Southwest and its employee groups.

For the time being Southwest continues to execute its age old model relatively well, effectively hiding the cracks that are starting to emerge in its persona. But at some point market dynamics could force a change in business philosophy on the airline; perhaps it is time to think about creating a new foundation for the next era in the US airline industry.