Southwest Airlines faces uncertainty, but opts out of US airline loans

Southwest Airlines is experiencing some slightly positive movement in bookings in Aug-2020 and Sep-2020, but the company continues to refine its capacity estimates as the recovery in demand remains jagged and shows no signs of stabilising in the immediate future.

The airline and other US operators are accepting the reality that demand will remain depressed until a vaccine for COVID-19 is widely available. And although daily case counts in the country appear to be decreasing, the US remains in the throes of the pandemic.

As a result, many US airlines are working to finalise loans with the US government; however, Southwest has opted not to participate in the programme, which ultimately could give it advantages over its peers that are accepting the terms of those loans.

Southwest continues to cut capacity, even as some positive trends emerge

Southwest recently stated that through 19-Aug-2020 it had experienced a modest improvement in close-in leisure demand, and booking trends for Sep-2020 had also modestly improved.

At various times during the pandemic Southwest has not cut capacity as aggressively as some US airlines and at one point, the airline believed it could inch close to operating a full schedule by YE2020. But with COVID-19 cases in the US growing rapidly, Southwest watched as its net bookings declined by 10 to 15 points year-on-year during a portion of 2Q2020.

Southwest expects the decrease in revenue in Aug-2020 to fall between 70% and 75%, which is an improvement from previous projects of a decrease of 70% to 80%. Its load factors for the month should settle between 40% and 45%, compared with a prior forecast of 30% to 40%.

Data from CAPA and OAG show that Southwest slashed its planned seat deployment between 3-Aug-2020 and 10-Aug-2020. 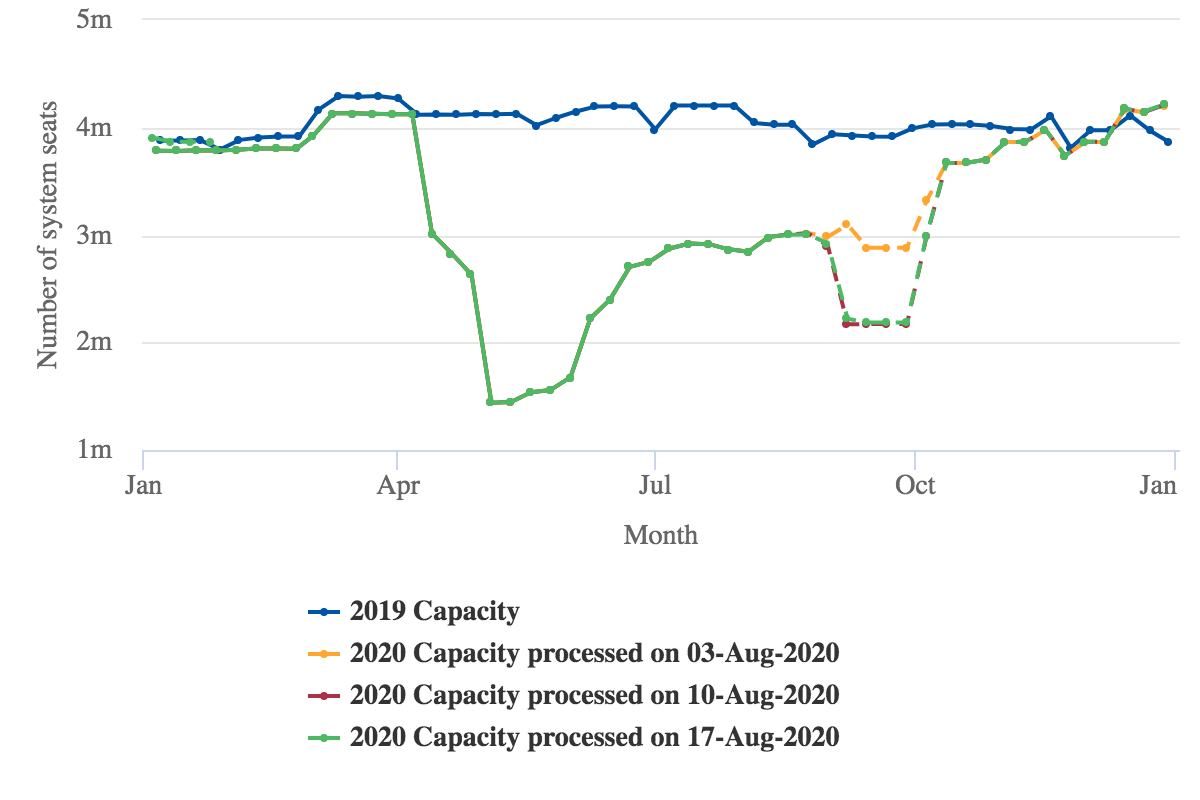 Even with some encouraging booking trends, which are likely driven in part by Southwest injecting low fares into the market, the airline recognises that demand remains unpredictable, given the growth of COVID-19 cases in the US. 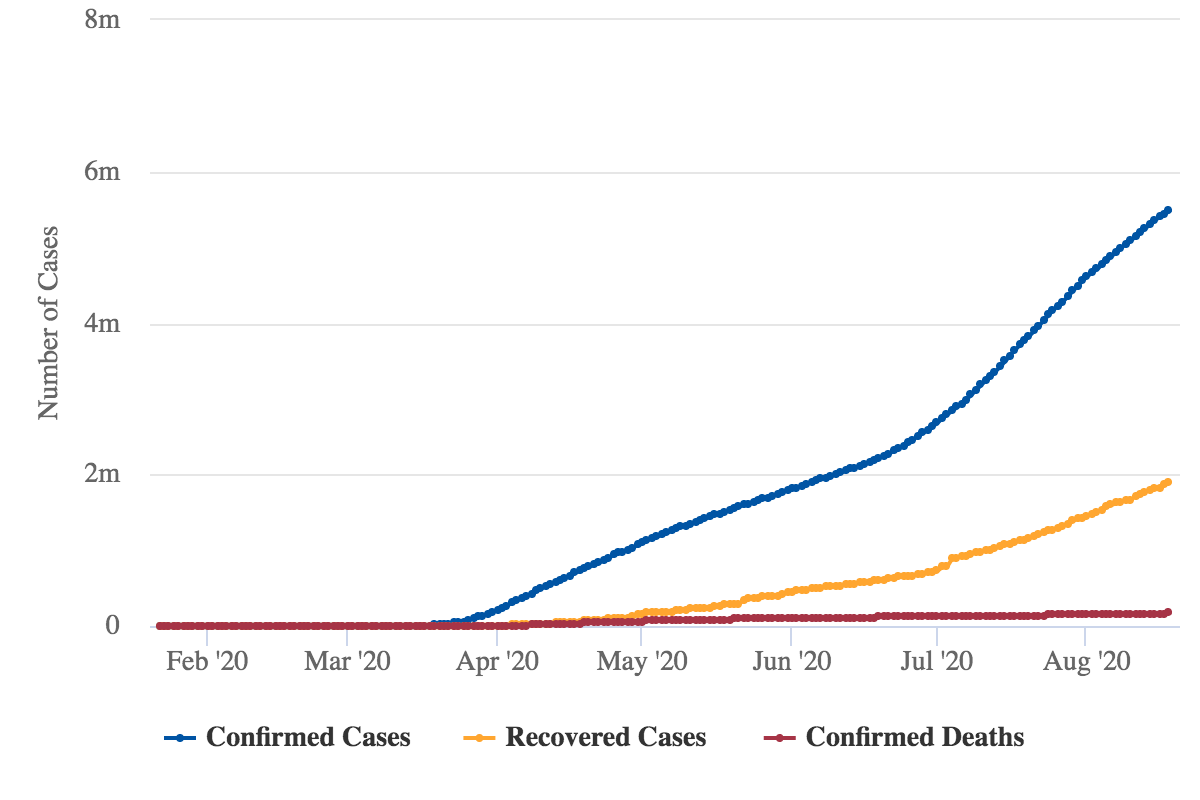 There is growing consensus that a full recovery in air travel demand will not occur until a vaccine is widely available. And there is no definitive timeline for when a viable vaccine could be mass produced.

Until that happens, there are likely to be fits and starts with respect to demand, and although Southwest has previously stated that it could reach a level where it is just 25% smaller year-on-year by YE2020, the airline is also being realistic about the unpredictability of demand patterns.

However, near the end of Jul-2020 Southwest CEO Gary Kelly acknowledged that “it’s really almost impossible to plans right now…the rule of thumb you should be using is that we’ll be lowering our capacity in the fourth quarter [4Q2020] roughly 25%, and if demand is like it is today, that won’t be enough”.

Southwest opts out of a government loan – will that decision create advantages?

As part of the US government’s Coronavirus Aid, Relief and Economic Security Act (CARES), airlines and other aviation suppliers could access up to USD25 billion in loans. Many US airlines signed letters of intent with the government to access the loans, and they have until the end of Sep-2020 to decide whether they will agree to the terms of the loan agreements.

Southwest was one of the airlines that signed a letter of intent with the US government for a USD2.8 billion loan, but has opted not to access the funds.

The airline has approximately USD15.2 billion in liquidity, and the ratings agency S&P has recently reaffirmed its investment grade rating. However, its BBB rating is just two notches above speculative grade.

Still, the airline has maintained its investment grade rating with S&P, Moody’s and Fitch. Southwest has said that it believes the company can secure additional financing on favourable terms, if necessary, without accessing the government loans.

Previously, Mr Kelly has stated that the terms of the government loans were onerous, including a “significant file of warrants…I think we would much rather avoid those. And I think what's near and dear to shareholders' hearts is it puts restrictions on dividends which I object to, and share repurchases. I object to that as well”.

Southwest is well positioned as the pandemic continues to create uncertainty

At the moment, Southwest is not paying dividends or participating in share buybacks; according to the airline: “...but obviously we would like to have that flexibility in the future…so there are a lot of reasons why we’d like to avoid that [the onerous terms]”. Mr Kelly remarked that if Southwest’s competitors agree to those terms, they could potentially be at a disadvantage.

By opting out of a government loan, Southwest could have an ability to resume dividends and stock buybacks faster than its peers. This obviously will make it a more attractive company to investors, and the investment grade rating could be an advantage as the airline works to restructure its balance sheet once demand reaches some sort of normal level.

However a return to that kind of normality is years away.