The new Southwest has a combined market capitalisation of USD9.8 billion. The acquisition is expected to produce annual benefits exceeding USD400 million by 2013, with one-time costs of about USD500 million expected.

AirTran will continue to operate under the AirTran brand with its same policies, procedures, and product features for a unspecified period of time. Southwest plans to integrate AirTran into Southwest Airlines over time by transitioning the AirTran fleet to the Southwest Airlines livery, developing a consistent customer experience, and transitioning the operations of the two carriers onto a Single Operating Certificate, expected by 1Q2012.

Virgin Blue Holdings released a new issue announcement of options convertible into ordinary shares of the company. The 76,438 options, with a strike price of nil, will be issued pursuant to the terms of the company's Senior Executive Option Plan Issue. The options relate to the performance during the period 01-Jul-2010 to 30-Jun-2014. Virgin Blue stated the purpose of the issue of options is to encourage participation by executives in the company through share ownership and to attract, retain and motivate the executives.

Markets in Moscow, Hong Kong, Shanghai, Taipei, Singapore, Kuala Lumpur and Bangkok were closed for trading on Monday due to the Labour Day holiday. 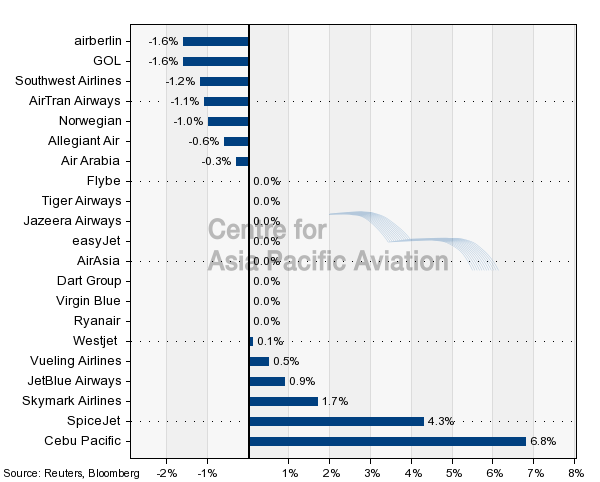