After delivering on all its promises from its 2007 strategic plan and doubling its goal of increasing revenues by USD1 billion, Southwest promised more of the same for its next five years and, judging from its stats, it has no doubts its goals are achievable.

CFO Laura Wright reported that, given the year on year PRASM gains for October and November as well as half of December, the airline expects PRASM to be up in the high single digits for the full year. Revenues are more than USD2 billion greater than in 2007, achieved on only a 1% increase in ASMs.

Breaking out that USD2 billion includes about USD700 million resulting from the increase in passengers and load factors as well as a USD1 billion increase in yields with the remainder in new products such as business select and early bird. While the airline was short of its pretax 15% ROIC goal at 10% through 30-Sept, Wright indicated that was still something to be proud of and is a sign of progress. 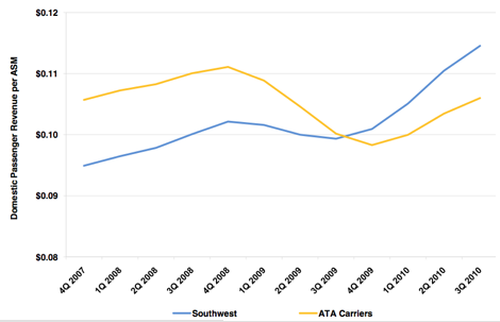 While she cautioned that the results could not be attributed solely to the bags-fly-free (BFF) programme, it certainly played its part. Ms Wright pointed out that the legacy declines were steeper than Southwest, saying they occurred about the time they began charging for bags.

Senior Vice President Marketing and Revenue Management Dave Ridley said it was a struggle to decide whether or not to follow the industry on baggage fees, emphasising the analysts in the room gave Southwest a hard time about leaving money on the table. However, it proved to be a shrewd move which, he has said before, equals about USD1 billion in share shift. Considering that bags would likely only achieve a revenue increase of USD500 million, then Southwest’s BFF policy has clearly paid for itself. 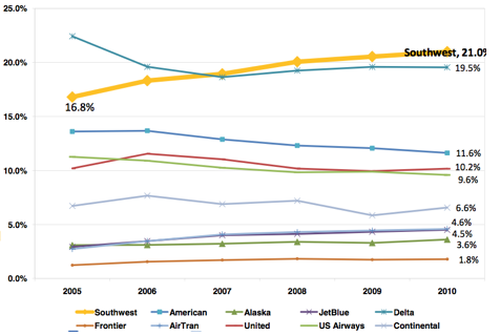 The share shift was even more marked in the Denver market where it rose to 26% on the back of United’s decline to 27%. Interestingly, Frontier’s market share there, 21.1%, has been on a slight decline, although with its new ownership it will likely be able to hold its own for now. At Chicago, Southwest shares the market almost evenly with American and United, each with a quarter of the market.

It owns 40% of the Las Vegas market, largely on the back of US Airways’ declines there and in Phoenix, US Airways’ home market, its market share is also 40% compared with the legacy at about 25%. St Louis is also at 40% replacing the declining share of American which is at 21.3% from its high of nearly 45%. These high share numbers definitely have implications on revenues since it drives higher yields.

But the decision to set Southwest apart by not charging for bags or cancellation or change fees, is really working. Mr Ridley reported that brand recognition was very high and even better amongst business travellers. 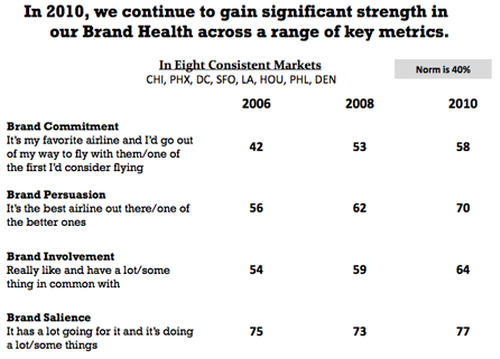 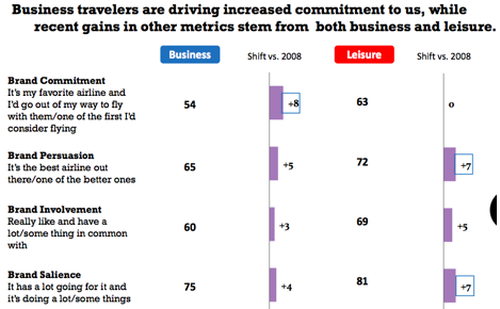 CEO Gary Kelly, speaking to analysts during Thursday’s Investor’s Day, noted that Southwest's performance over the last five years assumed a relatively stable fuel and competitive landscape. He added its ability to adapt allowed it to weather escalating fuel prices in 2008 and the worst recession in 80 years and still deliver its 38th consecutive year of profits expected to be posted for 2010. 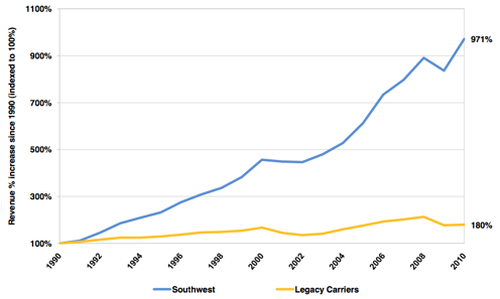 Interestingly, Southwest has already achieved a nine-month USD435 million net profit tantalisingly close to the USD471 million it posted for the full year in 2007. It is anticipated it will best the 2007 stats by a wide margin.

“The past decade has been a real game changer,” Mr Kelly told analysts. “The cost structure of the industry has forever changed because of fuel. Five years ago, we set out to transform the company for the future but we had to adjust and improve wherever we could despite the fact the environment turned out to be much worse that we anticipated in terms of fuel and the economy.

“Contrast that with what we did not do, furlough or cut pay, lose our culture, efficiency or productivity,” he continued. “Nor did we lose our historic and dramatic cost avantage and customer loyalty. You have to pause any time you take a risk such as what we planned in 2007 but instead of losing things, they’ve gotten better.”

The management team explained how the company adapted during the period before outlining its strategic plan along several financial, marketing and operational fronts. In 2007, with several challenges ahead, it knew that it would have to produce an additional USD1 billion in revenues to continue its growth trajectory. However, its five year projects presented yesterday, did not pin down a number to its expected revenue growth through 2015. Instead, it reaffirmed its commitment to 15% annual earnings growth annually and a 15% return on invested capital.

Adding to its five-year goals is controlling costs as well as maintaining and adequate fuel hedge position that is now becoming increasingly important as fuel edges toward USD90. It also recommitted to maintaining investment-grade credit and adequate liquidity, meaning it will have to bring up the AirTran results, which are now junk rated.

Mr Kelly indicated that the focus was back on growth in an industry that is not growing. Its strategic plan includes expanding the network, growing revenues, “conquering the cost mountain”, managing risk, and, of course, the integration of AirTran. 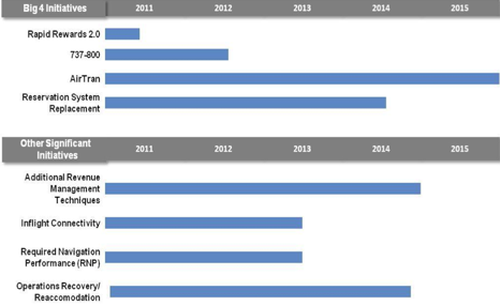 For 2011 its main goals are to develop an operations recovery programme for irregular operations which will be aided by its new reservations system. The new system will rebook disrupted passengers automatically instead of the manual method used now. Mr Kelly said the choice has been narrowed to Sabre or Amadeus. Top priority is to institute codesharing not only with its already announced partnership with Volaris but to implement it with AirTran within 30 to 90 days after closing.

Also on the 2011 agenda is preparing for the 737-800 which will be used for overwater operations to Hawaii and the Caribbean. The company hopes to complete its certification for ETOPs by the end of 2011, in preparation for the March 2012 delivery of the first -800.

On the cost front, it is expected to generate significant savings from the Required Navigation Performance operations it begins next year. The fuel savings will also be helped by the move to new avionics when it also installed, according to Executive Vice President and Chief Operating Officer Mike Van de Ven. He indicated if just three minutes can be shaved from every flight that would mean a USD20 million fuel savings.

“I hear and read so often that Southwest no longer has a cost advantage,” she said. “I hope you see from this chart, that although that advantage has narrowed, it remains quite substantial. We have retained that advantage without reducing pay or furloughs. After 40 years we have maintained our cost advantage despite the fact we have industry-leading wages.” 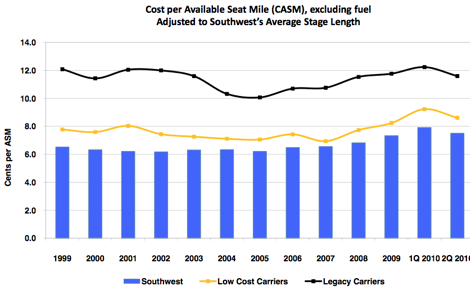 Worries about rising fuel costs definitely rippled through the audience with one analyst questioning whether it might mean the low-cost carrier model no longer works.

“That is the key question,” Mr Kelly responded. “The number one challenge the industry faces is energy costs. As fuel costs rise, if everyone pays the same fuel costs, that, unfortunately, will diminish the cost advantage and we have to be mindful of the risk. We can adjust and that is the importance of the improvement of the past three years so that we don’t rely solely on our reputation as a low-cost carrier. Everything we see says our passengers don’t shop us on low fares but because they are fans. We are continuing to build the experience so we are less dependent on low fares.

“If we have a cost advantage, that makes the argument we are making even stronger,” he continued. “We have spent 90% of our effort in the last few years on raising revenues and we are constantly focusing on costs savings which are not easy to come by but that’s the virtue of all that revenue benefit we’ve had and moving to the 737-800. We are more concerned about energy than the competitive landscape and consolidation will help that which should benefit  Southwest.”

Asked to define a low-fare brand, Mr Kelly said that strikes at the core of Southwest. “We are loathe to walk away from the low-fare brand but we need to go deeper into what low fare means. It is different at USD80 crude. I would bet that demand has fallen on the higher fares so we have a smaller pool of passengers because of that. I guess we want it defined as lower than the competition and then, if we are fortunate, it is lower, in absolute terms, than the automobile.” 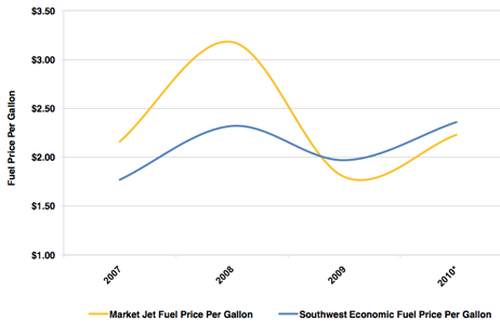 Ms Wright acknowledged that cost pressures affected the unit revenue growth at legacies as she pointed out that Southwest continued to outpace them which should ease some of the cost pressures as it focusses on managing costs ex-fuel.

Southwest must still close the gap with legacies on load factor, said Ms Wright, but it is leading in unit revenue growth and outperformed the industry on yields. The load factor gap has narrowed significantly from the 58% in 1986 based on the schedule optimisation, as well as enabling better connections since connecting passengers now account for 40% of traffic. 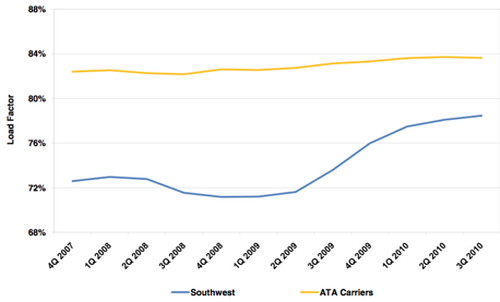 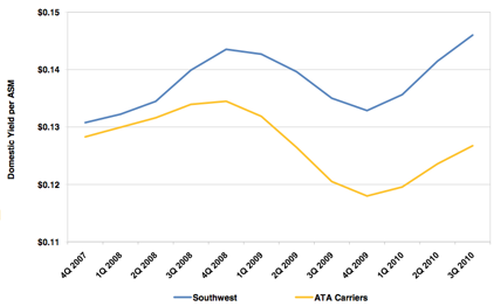 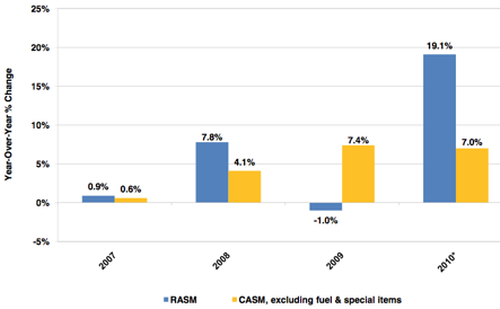 Southwest will take 16 737-700s next year replacing a like number of classics and Wright indicated there will be no fleet growth outside of AirTran. “While capacity in the first half was a function of the capacity adjustments made this year,” she explained. “It is important to point out that it is still less than 1Q-2008. 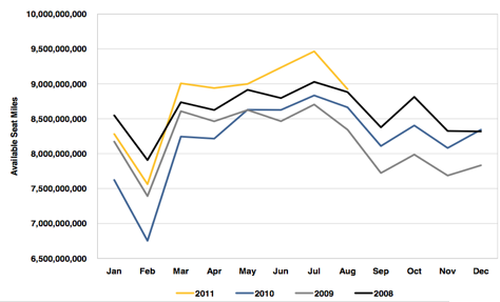 The airline is not adding back trips it pulled out in the shoulder period, reported Ms Wright. Rather it is deploying the aircraft into more efficient, long-haul markets. 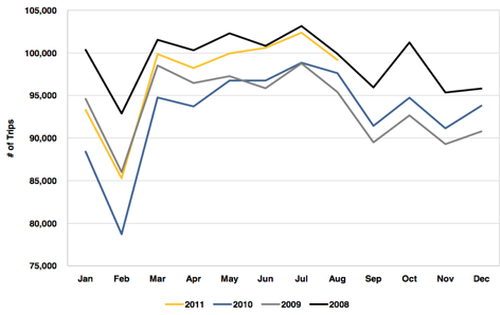