Southeast Asia’s low-cost carrier fleet is still projected to increase by nearly 20% in 2014 despite a recent spate of delivery deferrals and suspensions of expansion. The region’s LCC fleet also grew by about 20% in 2013, creating overcapacity in several Southeast Asian markets and leading to the current pressure on yields and load factors.

The AirAsia Group has made the right move in slowing down expansion by deferring deliveries and selling aircraft. Tigerair Mandala and Jetstar Asia also have decided to take at least a one-year hiatus from expanding their fleets. More Southeast Asian LCCs, including potentially the Lion Air Group, need to make similar adjustments for market conditions to improve.

Southeast Asia is still a market with huge opportunities for further LCC growth. But LCC capacity expansion has started to outstrip supply, perhaps necessitating a pause for breathing space.

There are currently 23 LCCs operating in Southeast Asia. Another four LCCs are expected to launch in 2014 including three in Thailand – Thai AirAsia X, Thai VietJet Air and NokScoot – and Indonesia AirAsia X.

The start-up activity is not too concerning as three of the new carriers are widebody operators. The medium/long-haul segment of the market is not nearly as crowded, with just four of the 23 existing Southeast Asian LCCs operating widebody aircraft. While some medium-haul markets are also now seeing overcapacity, particularly Southeast Asia-Australia, for the most part this sector of the market remains relatively underpenetrated. 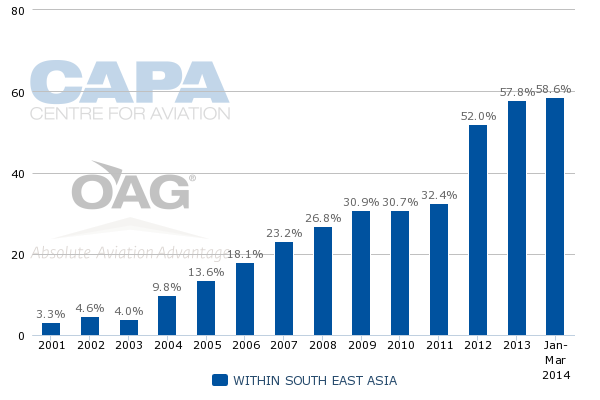 Source: CAPA – Centre for Aviation & OAG
Note: the jump from 2011 to 2012 was partly driven by the re-classification of Lion Air from FSC to LCC

From a demand perspective the market remains the ideal battleground for LCCs. There is still rapid economic growth in most of Southeast Asia and the region’s middle class continue to expand, bringing a rise in discretionary income levels. But LCC capacity has been added at a torrid pace. With full-service carriers also pursuing rapid expansion of regional capacity – including Bangkok Airways, Garuda Indonesia, Malaysia Airlines, Thai Smile and Singapore Airlines subsidiary SilkAir – the competition has become extremely intense as airlines of all types fight over a pie that is growing but not fast enough to keep up with supply.

In 2014 the region’s LCC fleet is projected to increase by another 18% to 573 aircraft. Again this is a net figure, but there will be fewer retirements in 2014. One notable exception is AirAsia, which is planning to sell six of its oldest A320s.

Southeast Asia low-cost carriers ranked by fleet size: projection for end 2014 versus start of 2014 and 2013

Source: CAPA - Centre for Aviation
Notes: Nok Air fleet includes for all years Saab 340s which are operated by a regional partner which is now in the process of being acquired by Nok.
Orient Thai fleet only includes those aircraft in scheduled LCC operation (737 Classics). Most of its fleet is used for charters.
Valuair still operates flights between Singapore and Indonesia but since 2013 has shared aircraft with parent Jetstar Asia. Therefore it no longer has its own aircraft.

The decision by AirAsia to sell six A320s and defer seven A320 deliveries which were originally slated for 2014 reduces the 2014 expansion rate of Southeast Asia’s LCC fleet by about 3 percentage points. Indonesia’s Tigerair Mandala also has dropped plans to add three A320s in 2014, cancelling a deal it had forged with the leasing company SMBC.

The Jetstar Group also recently announced plans to suspend expansion at Singapore-based Jetstar Asia, which will keep its fleet in 2014 at the current 19-aircraft level (includes subsidiary Valuair). But Jetstar Asia had already slowed down expansion, adding only one aircraft in 2013, and the group is starting to pursue expansion elsewhere in Southeast Asia, at its Vietnamese affiliate Jetstar Pacific, which has not grown in several years.

While the recent announcements by AirAsia, Tigerair Mandala and Jetstar Asia are welcome, it is not sufficient to resolve the current overcapacity challenge facing most of the region’s markets. Most notably, Lion has not yet joined rival AirAsia in slowing down fleet expansion.

Of the 48 additional aircraft, 38 will end up in the LCC sector in Southeast Asia as Lion’s only full-service subsidiary, Indonesia-based Batik Air, recently confirmed it will take 10 aircraft (all six of the A320s and four 737-800s). Of the 38 aircraft for the LCC market, 18 are now expected to end up in Indonesia at Lion and Wings, 12 in Malaysia at Malindo and eight in Thailand at Thai Lion. But this breakdown is subject to change as the Lion Group typically only finalises allocation of aircraft a couple of months prior to delivery.

Lion potentially has the flexibility to still defer some of its 2014 deliveries as a majority – 30 of the 48 – are coming in the second half of the year. But the group has shown no signs of even considering such a move. Lion seems eager to continue to make inroads in Malaysia and Thailand, where its affiliates are still relatively small, and resume faster expansion in Indonesia. In 2013 the focus was mainly on Malaysia and Thailand as the Lion Air fleet grew only marginally and the Wings Air fleet was flat, due in part to the phase out of older aircraft.

The 38 aircraft Lion plans to add to the Southeast Asian LCC marketplace 2014 is in stark contrast to the 16 aircraft AirAsia/AirAsia X plans to add. Lion will account for about 43% of the total LCC fleet expansion in Southeast Asia while AirAsia and AirAsia X will account for only about 18%. AirAsia will still have a larger fleet at the end of 2014 but Lion will close the gap to less than 20 aircraft. (If you include Batik in the Lion figures the gap will close to less than 10 aircraft.)

AirAsia currently has about 400 additional aircraft on order compared to over 550 for the Lion Air Group. As all Lion affiliates are based in Southeast Asia while AirAsia is planning to launch new affiliates in South Asia and North Asia, it is inevitable Lion will surpass AirAsia as the largest LCC group in Southeast Asia by fleet – most likely in 2015.

AirAsia/AirAsia X Group projected delivery dates for aircraft on order: as of 11-Mar-2014 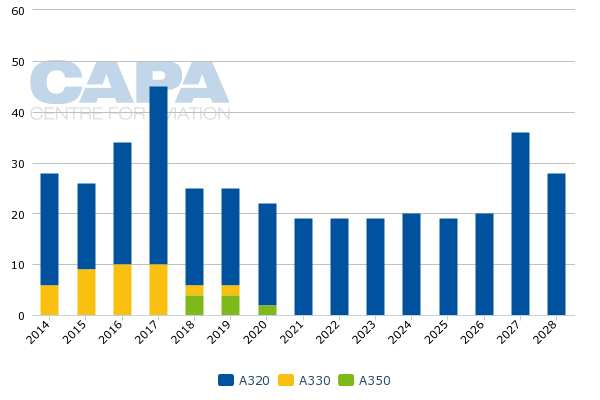 Source: CAPA Fleet Database
Notes: Firm orders include those placed directly by the group and by lessors assigned to the group. 2014 deliveries only show aircraft that have not been delivered as of 11-Mar-2014

Lion Air Group projected delivery dates for aircraft on order: as of 11-Mar-2014 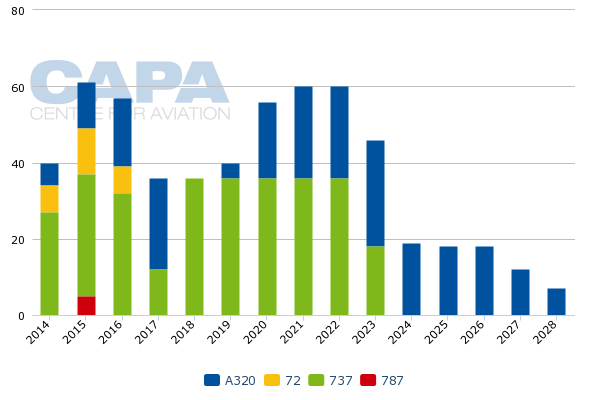 Source: CAPA Fleet Database
Notes: Firm orders include those placed directly by the group and by lessors assigned to the group. 2014 deliveries only show aircraft that have not been delivered as of 11-Mar-2014

The deferrals and aircraft sales at AirAsia will mainly impact its affiliates in Indonesia and the Philippines. Indonesia AirAsia, which originally was slated to add six A320s in 2014, is now not slated to take any. The group says its fleet in the Philippines, which was at 17 A320s at the end of 2013, will drop to 14 aircraft. This includes Philippines AirAsia (PAA) and Zest AirAsia, which phased out MA60 turboprops in early 2013 before its merger with PAA while adding A320s sourced from the AirAsia Group towards the end of the year.

Malaysia AirAsia (MAA) will still expand its fleet in 2014 but by only four aircraft to 76 A320s. This marks a major reduction compared to 2013, when eight A320s were added at MAA. But as a majority of these aircraft were delivered in 2H2013, MAA will still see rapid capacity expansion on a year-over-year basis. Average fares were down 18% at MAA in 4Q2013, an indication of the tough market conditions.

Malaysia-based AirAsia X is also slowing down expansion after adding seven A330s in 2013. The AirAsia X Group plans to again add seven A330s in 2015, but two are expected to be allocated to Thai AirAsia X as well as two to Indonesia AirAsia X. This will leave three additional aircraft for the original Malaysian operation. AirAsia X is still planning ambitious ASK growth of about 50% in 2014, with most of the growth coming in the first half and being primarily driven by the aircraft added in 2H2013.

There is still room for AirAsia to potentially make additional capacity adjustments for 2014. The group has indicated it could end up selling more than the six A320s currently on the block. While a slowdown at AirAsia X is probably not necessary, especially if the two new affiliates are able to launch as planned, there could be a need to slow down expansion at short-haul affiliate Thai AirAsia (TAA).

Among all the AirAsia short-haul franchises in Southeast Asia, TAA is the only one that has not adjusted its fleet plan for 2014 as the carrier still plans to take eight A320s, matching the eight aircraft added in 2013. The decision not to slow down growth at TAA is somewhat surprising given the unfavourable market conditions in Thailand, where political protests have significantly dampened demand.

At the much smaller Tigerair Group, while struggling Mandala is cutting capacity the main subsidiary in Singapore continues to grow at high-double digit clips. Tigerair Singapore’s ASKs were up 24% in calendar 2013 as it added four aircraft, bringing its fleet to 25 A320s. The biggest indications of overcapacity in Singapore’s short-haul market emerged in 4Q2013, when the carrier’s average fares were down 16% while load factor slipped 11.6pts to 73.4%.

Tigerair Singapore is now planning to add another nine aircraft by the end of Mar-2015, including five aircraft which are coming out of the fleet of Tigerair Philippines following the sale of the carrier to Cebu Pacific. CAPA estimates eight of these aircraft will arrive by the end of 2014.

Tigerair recognises its home market will struggle to absorb the additional capacity and has been looking at possibly selling or subleasing aircraft. But finding suitors for A320s is not an easy feat in the current market.

Deferrals would be ideal as it would buy Tigerair time to get its new affiliate in Taiwan up and running. But as Tigerair has a small order book which runs dry in 2015 it probably lacks the leverage AirAsia enjoys with Airbus. One solution could be a new A320neo order as Tigerair has been evaluating long-term replacements, although even that may not persuade Airbus to swallow the last minute deferrals of current generation A320s.

Independent LCCs are more conservative as Lion and AirAsia race ahead

Emerging LCC group VietJet also plans to add 10 A320s in 2014. Most of the aircraft will be used to pursue further expansion in the Vietnamese market while at least two A320s could be used to launch Thai VietJet, which is now aiming to begin operations in mid-2014.

Garuda LCC subsidiary Citilink is also planning to add eight A320s in 2014 while increasing utilisation of its existing fleet.

Relatively conservative growth is being pursued at most of the region’s independent LCCs, including Nok Air, Cebu Pacific and Golden Myanmar. Nok plans to add four 737-800s in 2014 as it grows its fleet to 26 aircraft, including the six Saab 340 turboprops operated by a regional partner it is now in the process of acquiring.

Golden Myanmar, meanwhile, plans to take two ATR 72-600s to supplement its current fleet of two A320s. Golden Myanmar along with Malindo and Thai Lion were the only LCCs to launch in Southeast Asia during 2013.

While some of Southeast Asia’s independent LCCs remain in a relatively good position as they have first mover advantage in their home markets, competition will increase with the bigger groups. The groups, particularly AirAsia and Lion, account for most of the over 1,000 aircraft ordered by Southeast Asia’s LCCs. This is a massive figure that would triple the size of the current fleet even after taking into account some replacements.

While Southeast Asia generally remains a favourable market for LCCs, overcapacity could lead to some consolidation and reductions in the order book. There is undoubtedly unexploited growth in these markets, but for now the recent deferrals by AirAsia could be just the tip of the iceberg.