Latin America’s second largest airline – Avianca Holdings – is facing one of the most tumultuous times in its 100-year history.

The airline is navigating financial struggles and a CEO and board shake-up as its majority shareholder was unceremoniously removed as chairman. And although it has no formal ties to Avianca Brazil, the Brazilian airline’s misfortune has forced Avianca to stress that their operations are entirely separate.

Now Avianca is in triage mode, but it does have the support from its prospective JV partner, United, which has a vested interest in ensuring that Avianca survives and thrives.

The current iteration of Avianca Holdings is the result of the 2009 merger of Avianca and Taca.

Avianca is Colombia’s flag carrier and is celebrating its 100th anniversary this year. Taca was the leading airline in Central America, and now under Avianca Holdings the group operates 12 airlines across Latin America.

After the merger Synergy Group remained Avianca’s largest shareholder, and also used the Avianca brand to transition the Brazilian airline Oceanair to Avianca Brazil. But the two airlines always operated separately, and although there were discussions held about merging the two companies, nothing ever materialised.

Avianca Brazil sought creditor protection in Dec-2018 and Brazilian regulators recently suspended the airline’s operations. There is a bit of a scuffle for Avianca Brazil’s assets, with Azul, LATAM and GOL all vying for various pieces of the airline, including valuable airport slots.

Even though Avianca and Avianca Brazil are entirely separate entities, confusion still arises over their operations, and when Avianca Brazil sought creditor protection, Avianca had to clarify that it was not part of Avianca Brazil. The extent of their relationship was a limited codeshare.

Avianca fights challenges from all sides, including a CEO and board shake-up

Avianca posted a USD68 million loss in 1Q2019 and was recently downgraded by S&P after the ratings agency determined that it had taken the company longer than expected to refinance USD550 million in bonds due in 2020.

The company’s former CEO, Hernán Rincón, has also abruptly left the airline, and more recently there’s been a shake-up in Avianca’s board. BRW Aviation, which holds Synergy’s controlling share of Avianca, defaulted on a USD456 million loan from United Airlines which was secured by BRW’s shares in Avianca.

After the default, United opted to give Kingsland Holdings control of BRW’s shares.

Kingsland is Avianca’s second largest shareholder and is led by Roberto Kriete, who was CEO of TACA. Mr Kriete and the head of Synergy, German Efromovich, have clashed over the years. With the transfer of power to Kingland, Mr Efromovich has been ousted as Avianca’s chairman and replaced by Mr Kriete.

It is a dizzying cascade of events as Avianca works to fight currency challenges in its operating countries and regain profitability. It is also a tough blow for Mr Efromovich, who purchased Avianca out of bankruptcy in 2004 and was no doubt a guiding force through the merger with TACA.

But Mr Efromovich and his brother José have other issues too. In addition to Avianca Brazil’s troubles, Bloomberg has reported that shipyards run by Mr Efromovich have shut down.

United has stated that it is willing to lend Avianca an additional USD150 million - it has a vested interest in Avianca’s well-being. United, Avianca and Panama’s Copa Airlines are working to forge a joint venture covering routes from the US to Central and South America.

Their proposed JV was in response to LATAM's attempt to create an immunised relationship with American Airlines covering flights from the US to Brazil, Chile, Colombia, Paraguay, Peru and Uruguay. The Chilean Supreme Court recently rejected the LATAM-American tie-up and a similar proposed JV between LATAM and IAG, agreeing with Chilean tourism and consumer groups that the JVs would be anticompetitive.

Although the decision by the court is a blow to LATAM, it can push forward with other JVs, including Latin America’s largest aviation market, Brazil, and its third largest market, Colombia.

United and Brazil’s third largest airline Azul have had discussions regarding a JV, which would give United an immunised relationship in that strategic market.

Colombia system ASKs by airline, as of late May-2019 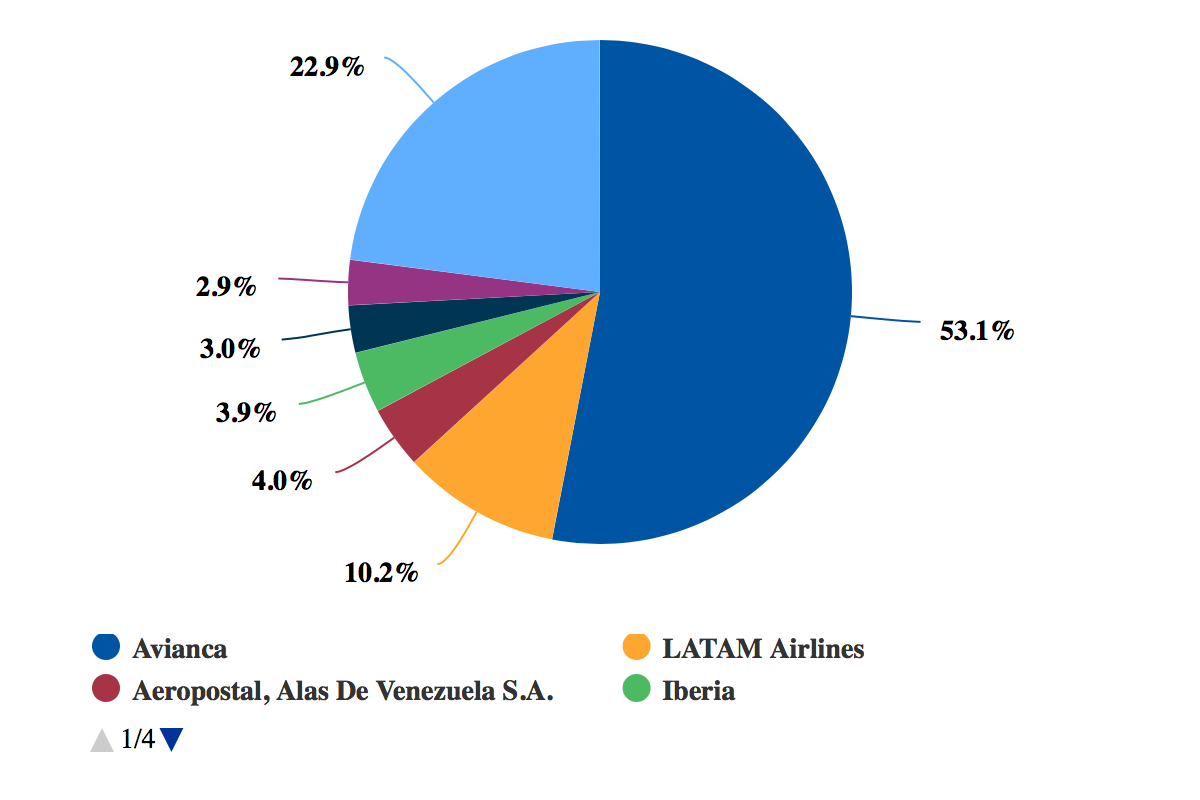 LATAM Airlines Colombia is the country’s second largest airline and Colombia is one of the countries included in the LATAM-American proposed JV. Authorities in Colombia and Brazil have already approved the proposed partnership.

United essentially needs a healthy Avianca in order to compete effectively with American once its JV with LATAM takes effect, and it has taken what it deems as necessary steps to steer Avianca in a direction towards recovery.

Avianca's board changes were necessitated by Synergy's challenges

An element of United’s pilot contract prohibits the company from holding a majority ownership in another airline, which necessitated the move to put Kingsland in control. It is not likely that United wanted to control another airline, but it obviously wants to maintain a certain level of influence over Avianca.

There is little doubt that United did not want to be mired in a board shake-up at Avianca; but Synergy’s woes created some unusual circumstances that United needed to address quickly.