Southern Africa’s aviation scene has for many years been dominated by South African Airways (SAA). This position is now seriously challenged, as the airline struggles to come to grips with a new world, at home and internationally. Foreign airlines are strengthening their positions, as SAA’s product deteriorates and as continuing management and funding uncertainty undermine the outlook.

As the European and Middle East airlines expand, so revitalised airlines in east and north Africa are enjoying the opportunities to provide high quality sixth freedom service between South Africa and countries to the north. And at home a thriving domestic industry has wrested control away from SAA.

Now, as the 2010 World Cup nears and SAA prepares for what it thinks will be a bumper harvest of inbound travel, the signs are that next year could be yet another massive shock to the system – and perhaps even terminal for the South African flag carrier.

This short report looks at where SAA is performing, where it may be heading and at the challengers for its market share at home and internationally. The outlook offers little of comfort.

South African Airways in a fight for survival

SAA’s long-term future is by no means assured. The carrier continues to struggle with a weak balance sheet, high costs, a strained organisational culture, waning political support and weak internal leadership. Adding to the crisis, SAA is expected to reveal a massive net loss for 2008/09 shortly. The carrier urgently requires significant recapitalisation, the appointment of a permanent CEO to fill the leadership vacuum, and the implementation of a strategy that will safeguard the business against rising competition in short and long-haul markets. None of this will be easy.

A major restructuring effort has yielded some gains, but progress on the whole at SAA lately has been very patchy. SAA’s restructuring programme, launched in May-2007, had four main pillars: simplify and rightsize the business, as well as reskill and incentivise management and staff. Mainline costs have been taken out by through a reduction in capacity (mainly involving the disposal of the B747 fleet) and the closure of loss-making services to Paris and Zurich. (The B747 disposal was much lauded at the time, however the aircraft remained on SAA's books and some were operating as recently as early 2009).

Even before the current economic downturn, SAA was relying on the support of government bailouts to help it with its restructuring efforts.

In 2006/07, SAA received ZAR1.3 billion in fresh capital and an additional ZAR1.56 billion was secured in 2007/08 to assist with restructuring costs. Reports suggest the real requirement in 2007 was for ZAR8 billion, but the government, wisely (given the lack of strategy and progress to a sustainable business model), declined to provide the total amount sought.

(The funding eventually agreed was in the form of a subordinated loan with a guarantee provided by SAA’s shareholder, the Public Enterprises Department. The loan has been classified as an equity instrument and any interest SAA elects to pay is classified as dividends. SAA paid dividends of ZAR137 million in 2007/08 relating to the subordinated loan). 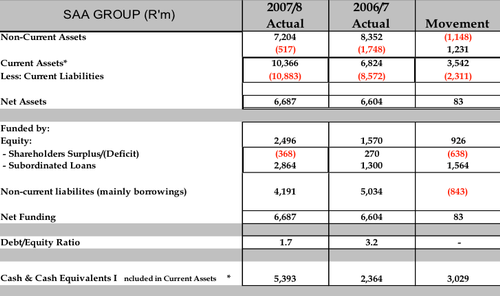 SAA remains undercapitalised and the turbulence of the past 12 months has prompted it to seek a further ZAR5.2 billion (USD660 million) capital injection to bring its debt to equity ratio down to 60-70% from 110% currently.

SAA’s CFO, Kaushik Patel, recently told a Public Enterprises Portfolio Committee that the business remained poorly capitalised with a large debt burden. Mr Patel stated, “no business could survive in the long term with such a load. It [is] just not sustainable”.

According to government budget documents, approximately ZAR1.6 billion has been allocated to SAA in 2009/10, or just under a third of the amount sought.

Privatisation of SAA, as sought by the opposition Democratic Alliance party, is not an option for SAA at present, as there would be few, if any, likely suitors in this environment.

In this context, the New Minister for Department of Public Enterprises needs to quickly revalidate government policy on SAA’s future as a state asset.

The airline also faces a post-election surge in union campaigns to exert greater influence at SAA, including recent attempt to destabilise the Acting CEO, Chris Smyth.

The favourite for the permanent CEO role is the current Director General of the Department of Transport, Mpumi Mpofu, although links to former President Mbeki may impact her chances. Other candidates areMr Smyth, as well as a former senior commercial executive, Nomfanelo Magwentshu, now Chief Operating Officer of the 2010 FIFA World Cup Local Organising Committee, and Nico Bezuidenhout, CEO of Mango.

SAA is due to announce its financial results next month. The carrier is likely to reveal another massive annual net loss, including:

At the net profit level, SAA reported a net loss in 2007/08 of ZAR1.1 billion (or a ZAR123 million profit excluding restructuring costs), compared to a loss of ZAR883 million the previous year. Restructuring costs consisted mainly of provision for aircraft leases and impairments with associated maintenance costs in respect of grounded B747-400s and redundancy payouts.