Japan’s Skymark Airlines continues to shine brightly among global LCCs, which had a mixed day’s trade overall. North American LCCs all ended the day in positive territory, with analysts and investors continuing to be upbeat about the US airline market as hopes for further central bank stimulus pushed wider US markets higher. LCCs in the Asia Pacific region, with the exception of Skymark, lost ground for the day.

Skymark Airlines (+11.6%) continued to strengthen yesterday, rising to a 10-year high of JPY950. The airline recently more than doubled its net income forecast for the year ending Mar-2010 citing strong sales and it is also a beneficiary of the strong yen, which lowers the airline’s dollar-denominated costs. The yen climbed to a 15-year high against the US dollar yesterday and weighed down Japan’s exporter-oriented stockmarket, which lost ground slightly. Skymark shares have gained 133% in the past three months.

JPMorgan analyst Jamie Baker yesterday upgraded JetBlue to “overweight”, with a price target of USD9. The New York-based LCC last week reported a 13.6% operating margin for 3Q2010, a 5.6ppt year-on-year increase. The operating result was among the best in a stronger-than-expected US airline reporting season.

Baker lowered his rating for Southwest Airlines to “neutral” from “overweight”, citing the stock’s price appreciation and integration risk as it closes a merger deal with AirTran.

In Southeast Asia, AirAsia shares slipped 1.2% yesterday. Kenanga Research stated it expects AirAsia to record MYR85 million in forex gains in 3Q2010. In a research note, Kenanga stated AirAsia's debt is mostly denominated in US dollars with 61% hedged using long-term forward contracts. Kenanga added that it expects a 12% increase in passenger volumes in 3Q2010, with ancillary revenues expected to outperform its forecast of MYR298 million (USD96 million) in FY2010.

Virgin Blue (-1.1%) continued to fall in the wake of Macquarie Group’s earnings downgrade. Macquarie dropped the carrier from "outperform" to "neutral". 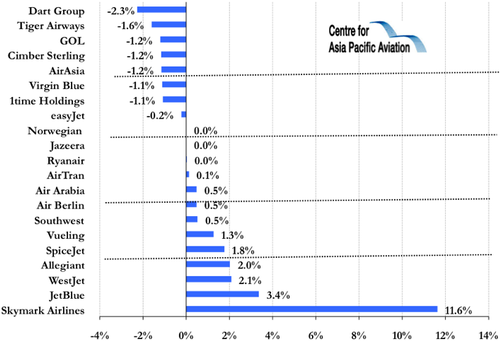