Skymark Airlines (-4.0%), Tiger Airways (+3.9%) and 1time Holdings (7.7%) were the most active LCC stocks on 29-Oct-2010. Global markets were mixed on Friday, with investors around the world awaiting the results of this week’s US Federal Reserve policy meeting and mid-term elections.

Among the gainers, 1time Holdings strengthened 7.7% on Friday, outperforming the benchmark Johannesburg All Share Index, which rose 0.8%.  Tiger Airways was another strong performer, gaining 3.9% in Singapore. The LCC announced on Thursday it has  signed a multi-million-dollar financing deal with Standard Chartered for pre-delivery payments of 14 new aircraft.

GOL gains after announcing US plans

In New York, Sao Paulo-based LCC GOL gained 1.7%. The LCC announced on Thursday it will launch charter services from Sao Paulo to Orlando and Las Vegas in Dec-2010.  GOL will use Boeing 767 aircraft on the route, which will operate under the Varig brand. It will be GOL's first venture into the U.S. market. GOL shares have gained 30% in the past two months.

Ryanair fell 1.57% to EUR4.13 after the UK Office of Fair Trading announced it is investigating the impact Ryanair’s 28.9% shareholding in Aer Lingus has on competition in the UK-Ireland market. 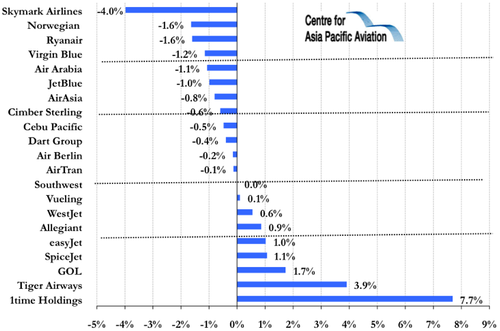