Scoot is pursuing rapid expansion over the next year, enabling the Singapore Airlines subsidiary to widen the gap further with other LCCs competing in its home market. Scoot is expanding its fleet by eight aircraft in the fiscal year starting Apr-2018 while the fleet at the only other Singapore-based LCC, Jetstar Asia, will be flat for the fifth consecutive year.

Scoot, which merged with Tigerair in 2017, now has a 41% share of LCC seat capacity in Singapore and a 13% share of total seat capacity. Scoot’s narrowbody operation (previously Tigerair) recently resumed growth after a three year hiatus, while the widebody operation which was initially launched in 2012 continues to grow at a consistent pace.

Six years ago, prior to Scoot’s initial launch as a long haul LCC, the AirAsia, Jetstar and Tigerair groups had virtually equal market shares in Singapore. Jetstar at the time was the only LCC operating long haul routes from Singapore. Capacity at Jetstar and AirAsia has since been relatively flat, or slightly down, whereas Scoot has expanded rapidly.

Number of Singapore-based LCCs reduces from four to two

There are currently 60 LCC aircraft based in Singapore, consisting of 44 A320 family aircraft and 16 787s. The narrowbody fleet is split between two airlines, with Jetstar Asia operating 18 A320s and Scoot operating 24 A320s along with two A319s.

Jetstar Asia, Tigerair (previously known as Tigerair Airways) and Valuair all launched in 2004. Jetstar Asia acquired Valuair in 2005 but kept Valuair as a separate subsidiary, using the Valuair operator's certificate for Singapore-Indonesia routes, until Oct-2014.

Scoot widebodies have accounted for virtually all the growth in the Singapore LCC fleet over the past six years. Scoot started with two 777-200s and grew the 777 fleet to six aircraft before quickly transitioning to an all-787 fleet in 2015. Over the past three years Scoot has steadily grown its 787 fleet to 16 aircraft (10 787-8s and six 787-9s).

By contrast, Jetstar Asia has not expanded its fleet since 2014. Jetstar Asia’s fleet peaked briefly at 19 A320s in late 2013 and early 2014 (including aircraft on the Valuair operator's certificate) but was cut back to 18 aircraft in early 2014. The 18-aircraft level has now been maintained for over four years, with Jetstar Asia suspending fleet expansion due to what it believes is overcapacity in the Singapore market.

In the table below these aircraft are still listed under Tigerair for comparison purposes, highlighting that nearly all the recent growth has been in the widebody segment. Over the past four years (Apr-2014 to Apr-2018) the number of narrowbody aircraft at Singapore-based LCCs has shrunk, while the widebody fleet has grown by 10 aircraft.

Note: *Apr-2019 figure is projected based on current Jetstar Asia and Scoot fleet plans.
Scoot and Tigerair merged in Jul-2017, transitioning to one AOC, but the Apr-2018 and Apr-2019 narrowbody fleet is still displayed above under Tigerair for comparison purposes.
Jetstar Asia closed the Valuair subsidiary in Oct-2014, transitioning to a single AOC; only Jetstar Asia listed here with Valuair aircraft included under Jetstar Asia.
Source: CAPA - Centre for Aviation.

Scoot to expand fleet by eight aircraft in FY2018

Over the next year Scoot plans to expand its fleet by another eight aircraft, including six narrowbodies and two widebodies.

Scoot is slated to take delivery of its sixth 787-9 in May-2018, followed by its seventh 787-9 in Jun-2018. The airline will use the additional widebody lift to add capacity on some existing routes and launch four weekly flights to Berlin, which on 20-Jun-2018 will become its second destination in Europe after Athens.

The narrowbody growth of six aircraft is being generated by a final eight A320ceos coming back from Indigo and two new A320neos, partially offset by four A320ceo lease returns. The A320neo deliveries are slated for late in the year and will also drive a slight capacity increase as they will have 186 seats, compared to 180 seats on Scoot’s A320ceos.

Note: Scoot and Tigerair merged in 2017. Figures have been combined in all years for comparison purposes.
Source: CAPA - Centre for Aviation and company reports.

Scoot is now more than twice as large as Jetstar Asia

Jetstar Asia carried 4.4 million passengers in CY2017 and had an average load factor of 83%. Jetstar Asia expects similar traffic in 2018 as it maintains its fleet at the 18-aircraft level for another year.

Jetstar Asia’s traffic has increased only marginally over the past four years. In CY2013 Jetstar Asia carried 3.9 million passengers.

The gap between Singapore’s two LCCs has widened significantly over the past six years. Jetstar Asia will account for only 26% of the Singapore-based LCC fleet in Apr-2019, compared to 43% in Apr-2013.

In terms of traffic, Jetstar Asia and Tigerair were close to being of equal size before the launch of Scoot six years ago. Jetstar Asia is now less than half the size of Scoot.

In terms of LCC capacity, Scoot currently has a 41% share of the market compared to 21% for both the AirAsia and Jetstar groups. The Lion Group has a 5% share and the remaining 12% of LCC capacity in Singapore is generated by eight standalone LCCs – Cebu Pacific, Air India Express, IndiGo, VietJet, Norwegian, Spring Airlines, West Air and Lanmei Airlines. 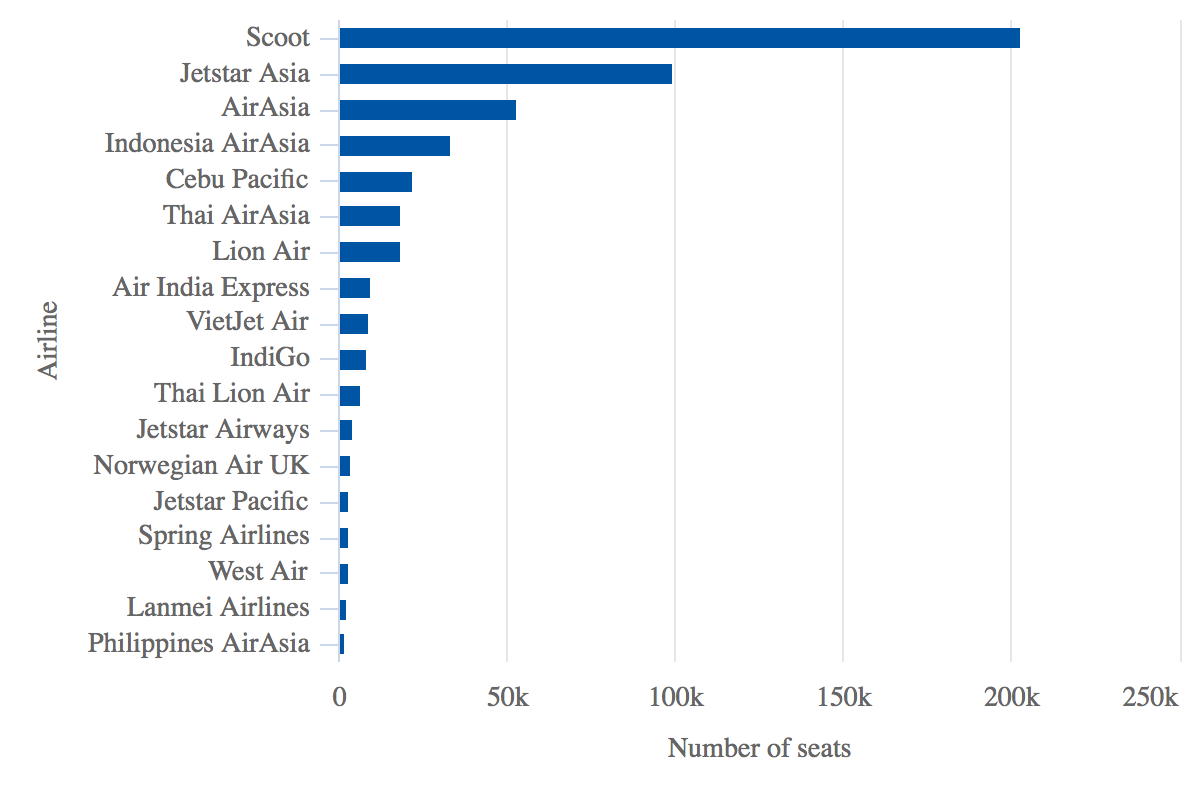 Jetstar’s current 21% share of LCC capacity in Singapore includes flights operated by its Vietnamese affiliate Jetstar Pacific (from Ho Chi Minh) and Australia-based Jetstar Airways (from Melbourne and Bali). AirAsia does not have a Singapore-based LCC but has a significant operation in Singapore using its subsidiaries or affiliates in Malaysia, Thailand, Indonesia and the Philippines.

Jetstar Asia launched three new destinations in late 2017 – Clark, Hat Yai and Okinawa. However, it suspended services to Perth and cut capacity in several existing destinations to free up capacity for the new routes.

Jetstar Asia’s ASKs were reduced by 4.6% in CY2016 and 2.5% in CY2017. RPKs fell only marginally in both years as Jetstar Asia’s load factor improved. Passenger numbers still increased, albeit slightly, as the average stage length was reduced.

ASKs have been on the decline due to maintenance requirements, despite the continued operation of a fleet of 18 aircraft. Jetstar Asia expects ASKs will remain at relatively low levels in 2018 as its fleet continues to go through a heavy maintenance cycle, but could recover in 2019.

Although Jetstar Asia continues to explore opportunities for network expansion, the airline is not ready to resume fleet or capacity expansion. The airline believes the Singapore market – and the Southeast Asia market overall – needs to become more rationale before a resumption of growth can be supported.

Jetstar Asia is focused on improving yield and profitability by attracting more corporate traffic and passengers connecting from FSCs. The Jetstar Group seems unconcerned about losing market share in Singapore.

Scoot’s share of LCC capacity in Singapore could reach 50%

Scoot has a very different perspective and, as a fully owned Singapore Airlines subsidiary, clearly has a strategic desire to expand. The SIA Group has been able to regain a 50% share of its home market by launching Scoot, taking over Tigerair, and now pursuing rapid expansion at the merged entity.

While the local Singapore market is limited, there are opportunities to expand sixth freedom traffic at Scoot. Currently only approximately 12% of Scoot traffic consists of transit (sixth freedom) passengers.

Scoot should be able to achieve a 50% share of Singapore’s LCC market, up from the current 41%, within five years. The airline aims to double its fleet in the five years following the completion of the Tigerair merger, generating high double-digit annual capacity growth. Given the relatively conservative expansion plans of the other LCCs competing in Singapore, Scoot’s market share will continue to increase.