SIA’s partnership with Virgin Australia will be key to making both sectors a success. Air New Zealand, which has a joint venture with SIA on non-stop flights from Singapore to New Zealand, is also expected to codeshare on the route although perhaps with some reluctance.

This is the second in a two part series of reports on SIA’s new Singapore-Canberra-Wellington “Capital Express” route. The first part focused on the impact on Canberra and Wellington airports while this part will focus on the impact on SIA and its two partners from the region, Virgin Australia and Air New Zealand.

Australia and NZ are strategically important markets for SIA

For SIA the Singapore-Canberra-Wellington route marks the group’s continued expansion in a key market. The Southwest Pacific region currently accounts for approximately 17% of SIA’s seat capacity and 21% of the airline’s ASKs, according to CAPA and OAG data.

SIA the parent airline currently has seven destinations in the region, including five in Australia – Adelaide, Brisbane, Melbourne, Perth and Sydney – and two in New Zealand – Auckland and Christchurch. Scoot also serves Melbourne, Perth and Sydney and operates the group’s only service to the Gold Coast, while SilkAir operates the group’s only services to Darwin and Cairns.

Adding Canberra and Wellington to the SIA network would not have been possible without the ability to operate across the Tasman Sea as the Canberra or Wellington market itself is too small to support a non-stop service from Singapore. Australia-New Zealand is an open market with unlimited fifth freedom rights.

SIA has been expanding in Australia

SIA indvidually is the second largest foreign airline in Australia after Emirates. SIA currently has approximately a 7% share of total international capacity from Australia, slightly ahead of Air New Zealand, and behind only Qantas, Emirates and Jetstar.

While SIA’s system-wide capacity has been broadly flat over the last several years it has continued to expand in Australia.

SIA’s current year-round Australia schedule includes 31 weekly flights to Sydney, 28 to Melbourne, 28 to Perth, 21 to Brisbane and seven to Adelaide. A small number of additional frequencies are operated in most markets for up to two months during the southern summer peak period.

SIA could be operating up to 130 weekly year-round frequencies in the Australian market by the end of 2016, since it is looking at further increasing Brisbane to 28 weekly flights. In the Brisbane market SIA has benefitted from the Aug-2015 suspension of services by rival Malaysia Airlines, which has also reduced capacity in other Australian markets.

SIA’s seat capacity in Australia has increased at a slightly slower rate, but still significantly, due to a reduction in the number of A380 flights and the recent introduction of premium economy on 777-300ERs and A380s. SIA currently operates only one A380 flight to Australia (Sydney) and has four 777-300ER flights (two to Melbourne and two to Sydney), while the rest of its Australia flights use older model 777s and A330-300s, which do not have premium economy or lie-flat business class seats.

With SilkAir and Scoot, SIA Group expansion in Australia has been even faster

For the group, SIA’s Australia schedule has increased even more significantly, as SilkAir only began serving Australia in 2012 and Scoot in 2013.

Scoot launched services to the Gold Coast and Sydney in mid-2012, followed by Perth in late 2013, and Melbourne in late 2014. The LCC currently operates 24 weekly flights to Australia, including one daily flight to Perth and Sydney and five weekly frequencies to Melbourne and Gold Coast. (During certain off peak months Scoot’s Australia schedule is cut back to as few as 19 weekly frequencies, while peak periods have up to 28 frequencies.) 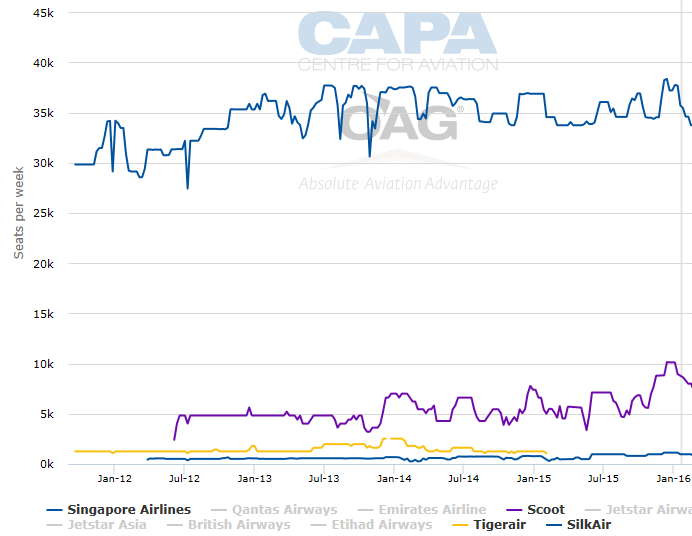 SIA’s rapid expansion in Australia over the last few years would not have been feasible without Virgin Australia, which forged a partnership with SIA in 2011. Virgin Australia does not serve Singapore, but it codeshares on all SIA and SilkAir routes to Australia and provides SIA, SilkAir and Scoot with domestic connections.

Virgin Australia already codeshares on an extensive array of SIA and SilkAir routes beyond Singapore. Passengers originating in Canberra will be able to access these connections, reducing journey times in several markets.

Air NZ launched its Singapore flight in Jan-2015, while SIA cut back from 12 year-round to seven year-round weekly Auckland flights, resulting in a slight net gain. SIA also upgauged Auckland from the 777-300ER to the A380 on a seasonal basis, with the A380 being used during the northern summer season.

Air NZ and SIA combined currently offer approximately 15,000 weekly seats in the Singapore-New Zealand market compared with around 11,000 seats two years ago (prior to their joint venture). 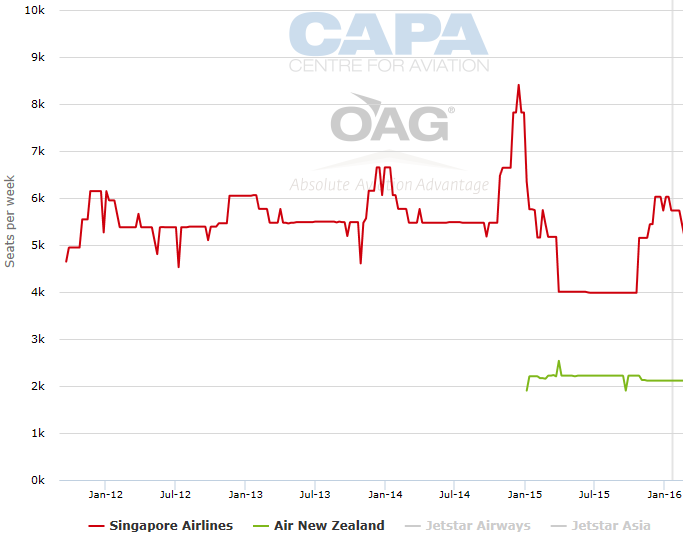 In addition to pooling revenue on Singapore-Auckland and Singapore-Christchurch, Air NZ and SIA have a comprehensive codeshare covering domestic connections in New Zealand and a wide mix of short haul and long haul flights beyond Singapore.

Extending the codeshare to include SIA’s new Singapore-Canberra-Wellington route does not provide a necessarily compelling business case for Air NZ.

Air NZ is currently able to offer its Wellington passengers a Singapore option via Auckland with the Auckland-Singapore leg operated by Air NZ or SIA. The existing one-stop itinerary via Auckland offers a similar total journey time as the new Wellington-Canberra-Singapore flight. The Auckland-Singapore flight also provides Air NZ passengers with a lie-flat business class product and a premium economy option, whereas for Wellington-Canberra-Singapore SIA is using a 777-200 with angled business class seats and no premium economy cabin.

Air NZ understandably seems to be somewhat reluctant to codeshare on the new SIA Singapore-Canberra-Wellington route. Unlike Virgin Australia, Air NZ was not ready to commit to codesharing in time for SIA's 20-Jan-2016 announcement. (The business case for Virgin Australia is different, as it does not serve Singapore and relies heavily on partnerships to provide a virtual network.)

Air NZ, however, is expected to commit to a codeshare by the time the new route is launched on 20-Sep-2016. Air NZ may prefer that SIA does not operate the route, but as SIA is clearly launching the service regardless it is better off extending its support. Refusing to codeshare would send the wrong message to the market and potentially damage its relationship with SIA.

SIA does not need the Air NZ codeshare to make the new Singapore-Canberra-Wellington route work. SIA has a strong point of sale presence in both the New Zealand and Australia markets. However, the new SIA strategy strongly values partnerships, and the ideal scenario for SIA is clearly to have both Air New Zealand and Virgin Australia on board as it continues to expand its presence in the Southwest Pacific region.

SIA rarely launches new destinations these days but Australia and New Zealand are extremely important markets for the airline. (SIA has not launched a new destination outside Asia since São Paulo was added in Mar-2011, and all its new destinations within Asia over the last five years have been destinations already served by SilkAir. In 2016, Dusseldorf is also being launched.)

Adding services to Canberra and Wellington is a bold but calculated move for SIA. The new route indicates SIA is willing to experiment with new combinations, and keen to leverage its strong position in the Australasia market.