Singapore Airlines (SIA) is pursuing further expansion to Australasia as it launches services to Canberra and Wellington in Sep-2016. The new four times per week Singapore-Canberra-Wellington route is a bold step for a traditionally conservative SIA, as it provides Canberra with its first two international destinations and Wellington with its first Asian airline.

SIA will account for approximately 5% of capacity into Canberra, resulting in a new phase of growth as passengers who now travel internationally via Sydney – by driving or taking a short flight – will be able to fly directly to New Zealand or Singapore and beyond. The impact on passenger traffic at Wellington will be smaller but provides an important test case, as Wellington ponders a runway extension that would enable non-stop flights to Singapore and potentially other Asian destinations.

On 20-Jan-2016 SIA announced plans to launch four weekly Singapore-Canberra-Wellington flights commencing 20-Sep-2016. The new route, which will be operated with 266-seat two class 777-200s, is strategically significant for SIA and both the Canberra and Wellington airports.

SIA to give Canberra traffic boost after four years of declines

Canberra is a relatively small market with a catchment area of nearly 1 million, including approximately 400,000 in the Australian Capital Territory (ACT) and more than 500,000 in New South Wales. Passenger traffic has declined in recent years, from 3.2 million passengers in 2011 to 2.8 million passengers in both 2014 and 2015.

Canberra annual passenger traffic and year over year growth: 2011 to 2015 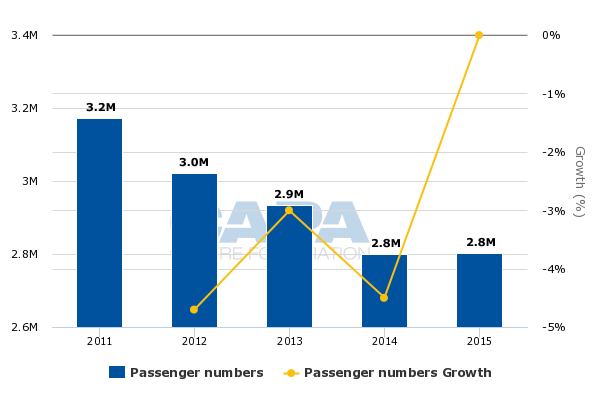 SIA will have 4,256 weekly seats at Canberra from late Sep-2016. This will give SIA an approximate 5% share of total capacity in Canberra, driving a new period of passenger growth for Australia’s eighth largest airport.

Currently Canberra Airport has approximately 80,000 weekly seats most of the year, with reduced capacity during off-peak periods. 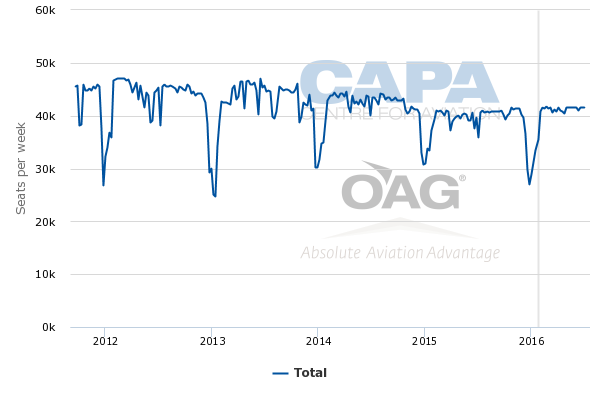 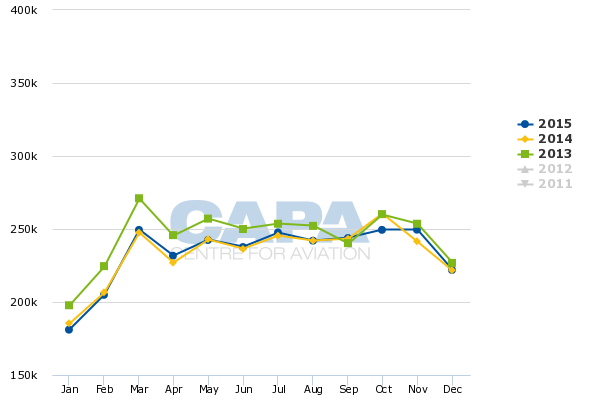 Canberra-Singapore sector to rely heavily on passengers connecting beyond Singapore

The new flight from Singapore will significantly improve Canberra’s connectivity, enabling new on-stop options for key markets such as Canberra-London.

The local Canberra-Singapore market is very small, with an average of only 45 one-way passengers per day, based on OAG Traffic Analyser origin and destination data for the 12 months ending Sep-2015. SIA is banking on a high proportion of connecting passengers beyond Singapore, as well as attracting a large volume of passengers that are now driving to Sydney Airport.

However, the early morning arrival will connect with a wide range of flights within Asia operated by SIA and regional subsidiary SilkAir. Regional connections would not have been optimised if SIA had decided to operate the Canberra-Singapore sector in the evening, arriving in Singapore around midnight, the only other option given that the flight originates in Wellington.

Canberra already has one-stop options to most major Asian cities via other Australian airports. But the new SIA flight will offer faster total journey times in several markets, and a new option that will avoid the hassle of a domestic to international connection at an Australian airport.

The new flight will also provide new one-stop options for several city pairs linking Canberra with some Asian capitals. For example, SIA will be the only one-stop option from Canberra to Colombo, Hanoi, Phnom Penh and Yangon.

SIA expects to attract Canberra passengers who are now flying internationally via Sydney or other Australian airports, as well as passengers who are driving to Sydney. As Canberra is only a three hour drive from Sydney, a large portion of Canberra area residents, or visitors, choose to drive to Sydney Airport.

SIA is expecting to stimulate demand in the ACT, as well as in the surrounding communities of NSW. In the ACT it is confident of stimulating demand in the leisure sector and student market, as Canberra has several universities with large Asian student populations. Stimulating leisure traffic will be critical to enabling SIA to fill the 3,648 weekly economy seats it will have in the Canberra market.

SIA is offering all-inclusive economy class return fares from AUD650 (USD454) on Canberra-Singapore and from AUD469 (USD327) on Canberra-Wellington. As it is generally more expensive travelling to either of these destinations via Sydney Airport – by road, rail or flight – SIA should succeed at stimulating the market.

The 608 weekly business seats should, in theory, be easier to fill since Canberra has a stronger business segment, particularly during periods when the Australian government is in session. SIA is offering all-inclusive business class return fares from AUD3166 (USD2210) on Canberra-Singapore, and from AUD1450 (USD1012) on Canberra-Wellington.

Even the promotional fare provides an attractive premium yield, particularly given that SIA is not offering full lie-flat seats on the new route, despite the fact that Canberra-Singapore and Singapore-Canberra both operate as overnight flights. SIA is taking advantage of 24hr operation at Canberra Airport with an 1130pm departure, giving passengers from southern NSW a late night option should they not be able to make the last SIA departure from Sydney Airport at 710pm. SIA has late night departures from Brisbane, Melbourne and Perth, but is unable to have an overnight flight on the Sydney-Singapore sector due to the Sydney Airport curfew.

SIA will be deploying to Canberra retrofitted 777-200s, which feature its regional business class seat, similar to the seat on its A330-300 fleet with the same six seat abreast configuration. SIA considered using the A330 for the new route but decided on the 777-200, with eight more business class seats than the A330 and 17 fewer economy seats, making it a better fit given the high portion of premium seats.

Entering the Canberra market is still relatively risky, particularly for traditionally conservative SIA, but a gamble worth taking given the support it is receiving from both Canberra and Wellington. Canberra Airport is reportedly spending AUD7 million (USD5 million) for route promotion and operational support. The airport is also investing in a new lounge, which will cost AUD25 million (USD17 million) to develop, and an expanded immigration and customs facility.

Wellington already has an international lounge and an adequate immigration and customs facility. But the airport is providing marketing support, while Wellington City Council has committed to paying SIA up to NZD9 (USD5.9) per passenger.

Wellington Airport currently has scheduled international flights to four Australian airports – Brisbane, Melbourne, Gold Coast and Sydney – and Nadi in Fiji. For several years Wellington has been keen to attract a Canberra service and Asian airlines, which can currently only access Wellington with a stop in Australia, because of runway limitations. With SIA the New Zealand capital gains both a service to Canberra and its first Asian airline.

For several years Wellington has been evaluating a runway extension that would enable non-stop flights to Asia. The new SIA service will be an important test case for both SIA and Wellington Airport to see if the market can potentially support non-stop flights in future (should the runway be extended).

Wellington City Council expects 19% of passengers on the new flight to be local Wellington-Canberra passengers, compared with 11% local Wellington-Singapore passengers. The majority, 63%, are expected to fly beyond Singapore, while the remaining 7% will connect domestically within New Zealand.

As is the case with Canberra, SIA should help drive a new phase of passenger growth at Wellington. However, the impact on Wellington will be less because Wellington Airport is double the size of Canberra Airport and SIA will have half as much capacity at Wellington. 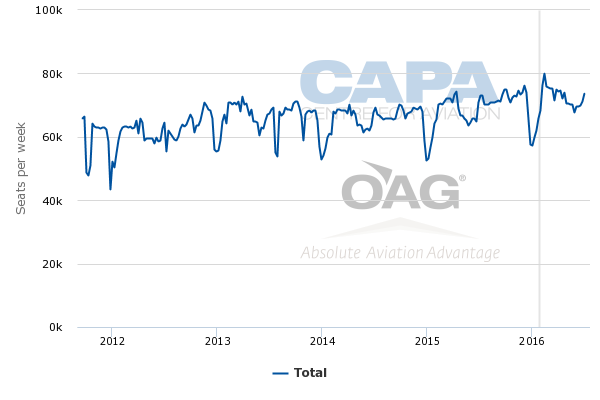 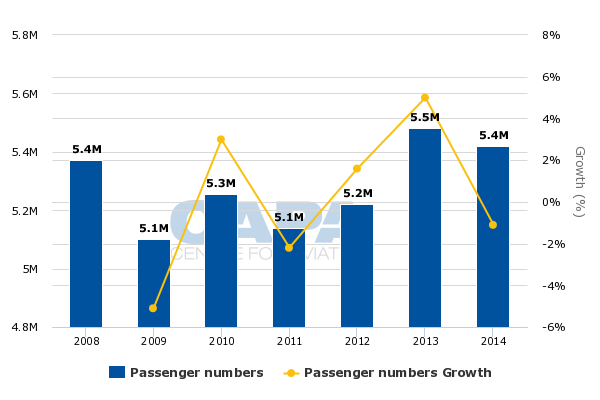 Like Canberra, Wellington has seasonal fluctuations and January is its weakest month as it relies heavily on business and government traffic. 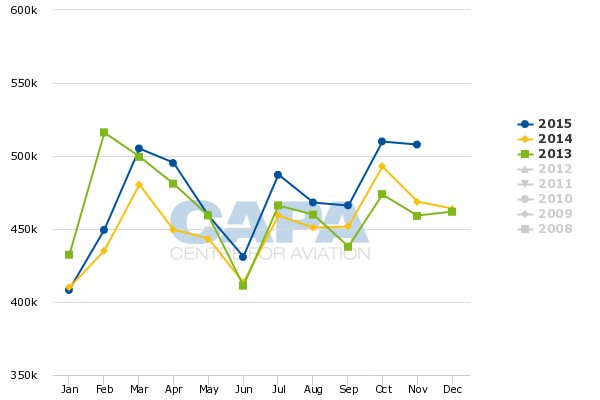 Air New Zealand has a dominant position in Wellington, with more than a 70% share of total seat capacity according to CAPA and OAG data. Jetstar has approximately 17%, while Qantas, Virgin Australia, Fiji Airways and small independent regional airlines account for the remainder. 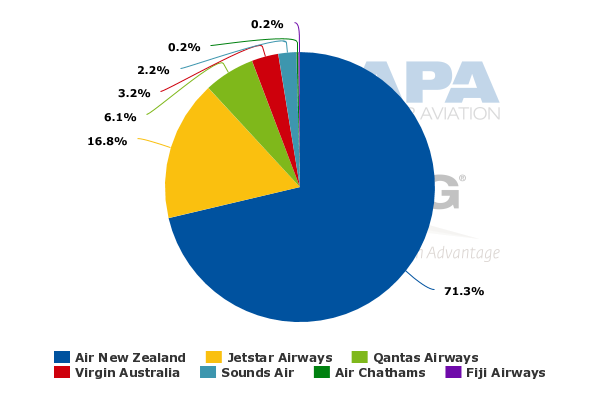 There should be further increases in Wellington international passenger traffic

Air New Zealand will likely be impacted as it is far the largest airline in Wellington. CAPA will study the ramifications for the Air New Zealand-SIA partnership in the second part of this report.

The overall impact on traffic growth at Canberra will be significantly more pronounced because a lot of Canberra’s potential passengers currently drive to Sydney given the proximity (approximately three hours and 300km). By contrast, the drive from Wellington to Auckland takes approximately eight hours over 650km.

Wellington Airport’s catchment area is approximately 1.1 million, which is only slightly bigger than Canberra, but Wellington has twice as much passenger traffic. This also indicates that Canberra is losing potential passengers to Sydney and is relatively more underserved than its New Zealand counterpart.

Still, it is a major milestone for Wellington to attract SIA and service to Canberra. A non-stop link with the Australian capital and a one-stop link with Singapore will boost the Wellington area economy and facilitate efforts to boost tourism.

For SIA, both New Zealand and Australia are strategically important markets. Serving Canberra and Wellington enables SIA to cement is strong position in both countries and its pioneering “Capital Express” link will raise SIA’s profile with both governments. CAPA will analyse the impact on SIA and the SIA Group in the second part of this report.