The evolving Singapore Airlines (SIA) partnership strategy has reached another milestone with a new codeshare agreement with United Airlines. While SIA and United are longstanding members of the Star Alliance, their relationship has never been close and involved any codesharing.

SIA and United stated in a 9-May-2016 application with the US Department of Transportation they intend to start codesharing on 1-Jul-2016. Initially the codeshare includes eight United-operated domestic routes beyond Houston. However, the two airlines are seeking blanket codeshare approval, which would enable potential future extensions to cover United-operated flights beyond SIA’s other US gateways, SIA-operated flights beyond Singapore and their flights in the US-Singapore market.

United is launching non-stop flights to Singapore in Jun-2016 while SIA is planning to resume non-stop flights to the US in 2018. United and SIA are fierce competitors across the Pacific but the new codeshare could open the door to a broader and potentially game changing partnership. SIA has been actively seeking new or enhanced partnerships, an initiative that has already resulted in new joint ventures with Star members Air New Zealand and Lufthansa.

SIA has never had a codeshare with United

Singapore Airlines currently has codeshares with 25 airlines from outside the SIA Group, including 19 members of Star. Of the seven Star members that SIA does not codeshare with, United along with SIA’s regional rival Thai Airways are the most notable exceptions. The other five are much smaller airlines and do not serve Singapore.

United and Thai Airways are among the five founding members of Star, dating back to 1997. When SIA applied to join Star a couple of years after the alliance was initially founded, United objected to SIA joining and the two airlines have since had a relatively sour relationship.

The Garuda and Malaysia Airlines relationships are very limited and only cover two Singapore-Indonesia and two Singapore-Malaysia routes respectively. The Virgin Atlantic partnership, covering primarily trans-Atlantic routes from London, is a holdover from SIA’s prior investment in Virgin Atlantic.

SIA has had a comprehensive partnership with Virgin Australia since 2011 and an equity stake in its Australian partner since 2012. This relationship gives SIA access to secondary destinations in Australia, an important strategic market where there is no Star member.

In the US, SIA has had to rely on non-Star members for domestic connections after Continental was swallowed by United and US Airways by American. While SIA has never had a codeshare with United, Star had three US members for several years. Star was left with two US members following the 2012 Continental-United merger and only one after US Airways left for oneworld in Mar-2014 following its acquisition of American.

SIA began codesharing with Virgin America in 2013 and with JetBlue in 2014. The latter was added at about the same time SIA’s codeshare with US Airways was terminated.

Houston is currently SIA’s only US gateway where it does not have any beyond access. The new United partnership therefore plugs an obvious gap in the SIA network.

According to the 9-May-2016 filing with the US Department of Transportation, United and SIA initially plan to codeshare on United-operated flights from Houston to eight US destinations: Atlanta, Austin, Dallas, Fort Lauderdale, Orlando, Miami, New Orleans and Tampa.

Providing new alternatives for accessing US offline destinations also becomes important for SIA as Virgin America is now in the process of being acquired by Alaska Airlines.

Alaska will likely be receptive to a codeshare with SIA given its relatively open approach to partnering with foreign airlines. However SIA cannot be assured that it will be able to maintain its existing Virgin America codeshares.

SIA will likely be keen to explore expanding the new relationship with United to include its other US gateways, particularly Los Angeles and San Francisco. United has a hub in both cities that would provide potentially much bigger beyond access than what is now provided by Virgin America (or Alaska once the acquisition is completed).

Los Angeles International Airport domestic capacity share by airline: 9-May-2016 to 15-May-2016 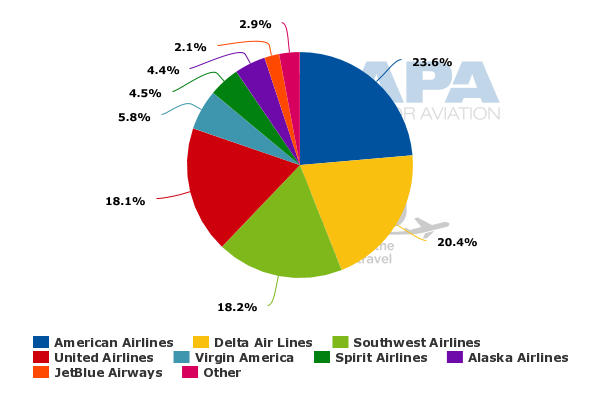 San Francisco International Airport domestic capacity share (% of seats) by airline: 9-May-2016 to 15-May-2016 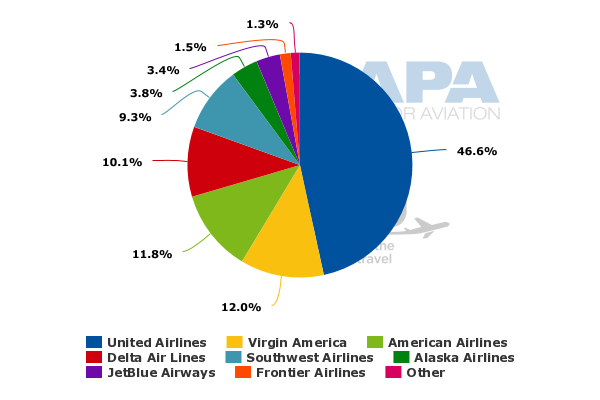 United currently does not have any services from SIA’s other North American gateway, New York JFK, as it has a hub at nearby Newark. Therefore SIA will certainly be keen to maintain its relationship with JetBlue, which has its main base at JFK.

JetBlue currently accounts for a 37% share of domestic seat capacity at JFK. Several other Star members currently work closely with JetBlue along with United since JetBlue is needed to help feed JFK, which for many foreign airlines is their largest single US gateway.

SIA is currently the 10th largest Asian airline in the US market. However SIA’s US capacity has dropped by approximately 20% since it ended non-stop flights to Los Angeles and Newark in late 2013.

SIA could use Houston as a Latin American gateway

Houston is SIA’s smallest gateway with five weekly 777-300ER flights via Moscow. Securing new feed for the Houston-Moscow-Singapore service is particularly significant for SIA as demand for both Houston-Moscow and Houston-Singapore has been impacted by the reduction in oil prices and economic problems in Russia.

The new United partnership could potentially be expanded to include more domestic routes beyond Houston as well as international routes to Mexico and Latin America. United currently has an 80% share of domestic seat capacity at Houston Intercontinental Airport and a 67% share of international seat capacity, resulting in a system-wide share of approximately 77%.

Houston Intercontinental Airport system-wide capacity share (% of seats) by airline: 9-May-2016 to 15-May-2016 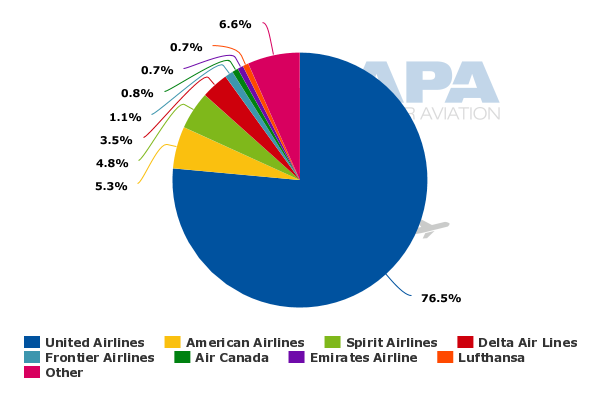 Most significantly for SIA, United accounts for an 87% share of capacity between Houston and Latin America.

SIA has improved its US presence with foreign airline codeshares

Under the initial codeshare with United, Atlanta would be the only entirely new offline destination for the SIA network. The other destinations covered by the United codeshare are already served by JetBlue and/or Virgin Australia except Miami. SIA already has offline access to Miami via London Heathrow using Virgin Atlantic.

SIA has used Virgin Atlantic for several years to provide offline access to destinations in North America. In recent years SIA has added US codeshares with several other foreign airlines, which partially is a response to a lack of partnership options with US airlines.

SIA now places its code on US flights operated by All Nippon Airways, Asiana, EVA Air and Turkish Airlines with the latter three all being relatively new developments. These airlines provide SIA with offline access to several US destinations without having to rely on US partners.

Providing access via foreign partners to as many US destinations as possible is important as accessing US domestic seats can be very difficult. Foreign airlines often complain their codeshares with US major airlines do not provide sufficient access to domestic seats due to extremely high US domestic load factors – which have increased significantly over the last several years and are now often above 90% – and uncompetitive prorates.

Most significantly, the new deal could open up the door to a more comprehensive partnership. With a wider-ranging pact typically comes better access to seats and more competitive prorates.

In their application with the US DOT, United and SIA requested approval to codeshare within the US, beyond the US (for example Latin America), beyond Singapore and between the US and Singapore. The latter covers both non-stops and one-stop flights via intermediary points.

SIA and United stated that initially their codeshare will only include United-operated fights within the US, specifically from Houston, and there are no “firm plans” to include any SIA-operated flights. However SIA and United stated they seek blanket approval for a two-way codeshare to give them "the flexibility should they decide to expand their codesharing in the near-term”.

A codeshare beyond Singapore could particularly help United after it launches non-stop flights from San Francisco to Singapore on 1-Jun-2016. United currently serves Singapore with two daily flights, one via Tokyo Narita and one via Hong Kong, but will suspend the Narita flight as the non-stop is launched.

United did not assume any connecting passengers beyond Singapore when it did the business case for San Francisco-Singapore non-stops. However connections, particularly to India, would be sensible. As CAPA highlighted in a Jan-2016 analysis report:

United has never been interested in pursuing a codeshare with SIA and has always treated Singapore as an end point. The new non-stop flight in theory opens up new opportunities to start leveraging Singapore Changi’s position as a hub for Southeast Asia and South Asia.

The San Francisco-Singapore flight lands in the early morning, enabling connections to both Southeast Asia and South Asia. There are particularly big opportunities in the San Francisco-India market as United could offer a quick one-stop product to several destinations in India from San Francisco, which has a large Indian community.

A partnership on Singapore-US non-stops would make sense

The new United-SIA partnership could also potentially lead to a codeshare on the new United San Francisco-Singapore non-stop route – and even perhaps a joint venture on Singapore-US routes. SIA is planning to resume non-stop flights to the US in 2018 using its recently ordered new fleet of A350-900ULR aircraft.

SIA is expected again to operate non-stops to Los Angeles and New York/Newark, which had been served non-stop by SIA with A340-500s until 2013, as well as an undecided third US destination. SIA used an all business 100-seat configuration for its fleet of five A340-500s but plans to include an economy and/or premium economy cabin with its future fleet of seven A350-900ULRs.

San Francisco non-stops are being considered by SIA but a partnership in the Singapore-US market with United could result in SIA instead launching non-stop services to Chicago and/or Houston. Chicago and Houston are major United hubs which would likely not be viable non-stop routes from Singapore without significant feed.

United would be able to focus on non-stops to San Francisco which, unlike the other potential US gateways, are within range of the 787-9 from Singapore. United expects only small seasonal payload restrictions on the westbound leg of the new San Francisco-Singapore 787-9 route. United is not intending to acquire A350-900ULRs or the 777-8X, both of which are able to easily operate non-stop flights from almost all US points to Singapore while the 787-9 is limited to San Francisco and Seattle.

A United-SIA joint venture – or even a codeshare on Singapore-US non-stops – would have been unthinkable until recently. However, United and SIA seem to be keen to improve their once rocky relationship and consider new scenarios.

For SIA, a close relationship with United is a logical next step in its overall drive to expand its partnership portfolio. SIA has forged several new partnerships and expanded several existing partnerships over the last five years. The number of codeshare flights that SIA markets has approximately tripled over the past five years.

More significantly, SIA has forged several major strategic partnerships or joint ventures including with Scandinavian Airlines, Air New Zealand and (most recently) Lufthansa. There also have been reports in recent weeks of a potential partnership between SIA and Air France.

For the US market, the earlier mentioned codeshares with JetBlue, Virgin America, Asiana, EVA Air and Turkish have improved SIA’s position. However, a comprehensive partnership with United would be much more significant.

The current highly competitive landscape in the Southeast Asia-US market, driven in part by expansion from Gulf carriers in both regions, dictates a review of new solutions. The decision by both United and SIA to launch – or resume in SIA’s case – Singapore-US non-stops is one response.

While doing the flights independently may seem feasible, a partnership would mitigate the very substantial risk involved.