Asian airline shares were mixed on Thursday (29-Jun-09), as Asian equity markets strengthened and fuel prices increased. Hainan Airlines led the gains yesterday, up 3.7%. Also stronger was Thai Airways, up 2.9%. Thai stated it has reduced non-fuel expenses by USD239.6 million in the first five months of 2009, as part of plans to reduce these expenses by USD321.1 million this year. Qantas and Japan Airlines shares were also up, by 0.9% and 0.6%, respectively.

Singapore Airlines, meanwhile, gained 1.4%, despite the carrier reporting its first quarterly loss since SARS in 2003 in 1Q2009/2010 (three months ended 30-Jun-09). SIA reported a USD221.7 million operating loss and USD213.3 million net loss in the period, due to the devastating combination of the global economic downturn, the outbreak of Influenza A (H1N1) and large fuel hedging losses.

The carrier also experienced concerning yield reductions in the quarter, with passenger yield down 17.7% and cargo yield slipping a massive 33%, for a combined yield reduction of 20.8% in the quarter. There was also a concerning 12.8 ppts negative gap between the carrier’s combined load factor and actual load factor figures (with a 12.7 ppt gap for passenger services and a 17.0 ppt gap for cargo operations). Looking forward, Singapore Airlines stated that while air cargo has stabilised in recent months, the freight outlook remains “challenging” with yields expected to remain under pressure from excess capacity. The carrier added that if the current conditions continue, the carrier expects to make its first ever annual loss.

Cathay Pacific CEO, Tony Tyler, also expressed caution about the carrier’s ability to recover from the current global economic crisis, stating the recovery will be long and challenging. Mr Tyler told The Australian he has “not seen the airline industry in such bad shape in the 30 years that I have been in the business". He added, "frankly, I doubt that it's ever been this bad. As an airline, we are suffering a toxic combination of a collapse in our front end and cargo revenues, skinny yields at the back of the plane, volatile fuel prices and an international financial crisis that shows no sign of ending”.

Mr Tyler also stated he has not ruled out the possibility of a permanent structural change in cargo and premium travel demand.

Leading the decliners on Thursday was China Airlines, down 3.1%. China Eastern Airlines was also down, by 0.4%. According to Chairman, Liu Shaoyang, the carrier is not optimistic about profitability in 2009, stating, “data show there will still be difficulties in the operation”. The carrier added that 2010 will be a “tough” year for its international operations, with the carrier now not expecting a recovery in international growth until 2011. Mr Liu added that while domestic growth is solid, it has come at the expense of yields, with domestic aviation fares declining 20% in 1H2009. 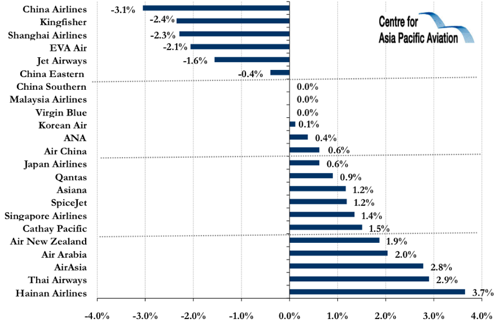