Shanghai Airport Authority, operator of Pudong and Hongqiao airports, stated it would fall short of its 2008 passenger volume target of 56 million passengers. Shanghai's air travel market has been hit hard by the domestic disturbances this year, as well as the global economic slowdown. Authority Chairman, Wu Nianzu, stated, "many other sectors are feeling the pinch of the crisis and airports are no exception".

Last year, Shanghai's airports handled 51.55 million passengers. At Pudong Airport, passenger numbers have declined in five of the past six months, snapping back somewhat in Oct-08. 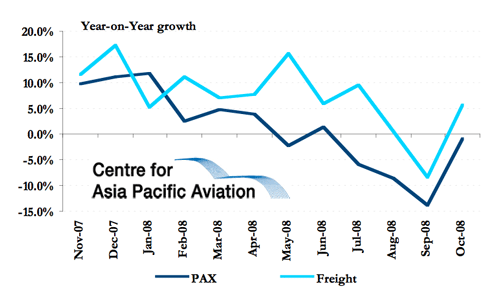 Volumes have also been subdued at Hongqiao this year, leading to the caution by airport authorities about the full-year passenger target. 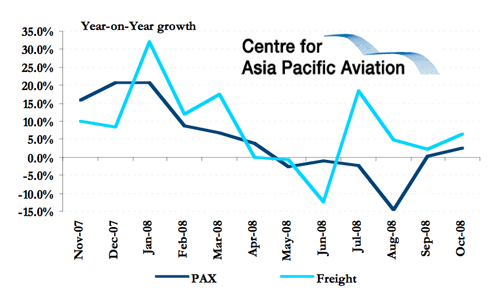 The expansion of heavily congested Shanghai Hongqiao Airport meanwhile is progressing according to schedule. The airport's second terminal project has completed concrete structure work and the foundation work for the apron project has also been completed. The Authority has proposed to develop an underpass or sky train to connect the two terminals (East and West) to make transfers more convenient

Hongqiao Airport's expansion project is scheduled to be completed at the end of next year and commence trial operations in 1Q10 in time for the 2010 World Expo. By then, the two Shanghai airports combined will have four terminals and five runways in service, together with the cargo transport zone, which opened at Pudong International Airport in Mar-08.

In the meantime, the Airport Authority has doubled passenger car fees at Hongqiao Airport in a move to ease congestion. The change sets a fee of USD18 for 24 hours, while new hourly fees for parking have been introduced for the first time. The airport has a total of 1,080 car spaces, although work is under way to add more spaces ahead of the 2010 World Expo.

In other development news, Pudong Airport's taxi parking area (P7) commenced operations on 10-Nov-08. P7 is 3.6 kms away from the airport and is able to accommodate 3,000 taxis.

Meanwhile, Shanghai Airport Authority has signed an MoU with Dallas-Fort Worth (DFW) International Airport, establishing "DFW-SAA Friendship Airports" to work closely together on a variety of key business and operational projects - from promoting direct air links between DFW and SAA to sharing information ranging from protecting the environment to airport security.

DFW International Airport CEO, Jeff Fegan, stated, "China is one of the fastest growing areas of increased trade with Texas and Dallas-Fort Worth and we are pleased to work closely with our colleagues in Shanghai to strengthen business and economic ties that will produce more opportunities for passenger service and cargo service in the years ahead,"

He added, "we believe this will also boost global awareness of both of our great airports. There is also much we can learn from each other on making our airports even more efficient, environmentally friendly and passenger-focused. The SAA is an incredibly well-managed operation and we look forward to working with its team on a variety of travel initiatives that will benefit our customers."